How President Trump Has Talked About 9/11 Over the Years 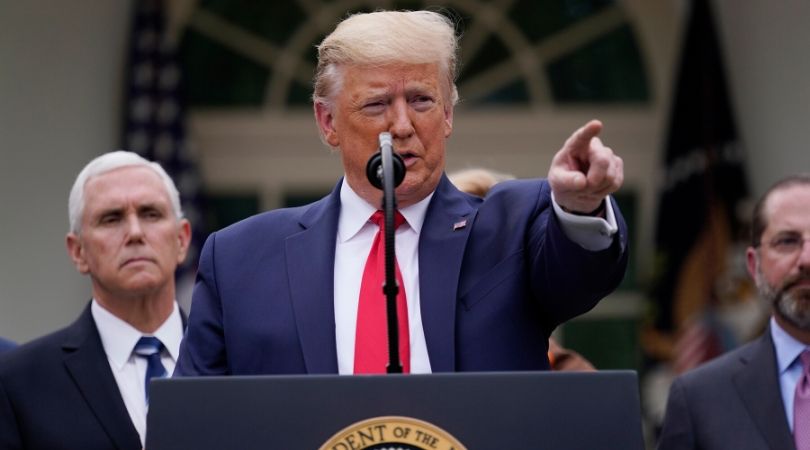 On his first September 11th anniversary in office Trump honored the day in keeping with his predecessors. In a statement during his first 9/11 as president his language was appropriately presidential:

[O]ur Nation recalls the nearly 3,000 innocent people murdered on September 11, 2001. As we reflect on our sorrow and our grief, we come together to pray for those who lost loved ones. As a Nation, we pray that the love of God and the comfort of knowing that those who perished are forever remembered brings them peace and gives them courage.

But how did Trump talk about the attacks before coming to the White House?

On the day of the attacks, Trump also made a jaw-dropping comment that, after the collapse of the Twin Towers, a property of his at 40 Wall Street was then the “tallest in Manhattan,” a dubious claim; 40 Wall Street was shorter than the tallest post-9/11 building in New York City by 25 feet.

Trump is a native New Yorker, meaning the events of Sept. 11 have an additional significance to him. The former real estate developer was interviewed in Lower Manhattan near the site of the attack by German news network N24 on Sept. 13, 2001.

“I’ve never seen anything like it, the devastation … New York is very strong and resilient and will rebuild very quickly,” he told the network. He also advocated for a “quick” and “effective” United States response to the perpetrators of the World Trade Center attacks and vowed that he and his businesses would “be involved” in clearing and reconstructing the area around Ground Zero.

In 2013, Trump tweeted his “best wishes” to everyone, even his oft-disparaged “haters and losers,” on this “special date,” Sept. 11.

“@realDonaldTrump: I would like to extend my best wishes to all, even the haters and losers, on this special date, September 11th.”

On the Campaign Trail

On the campaign trail in 2015, Trump boasted that he’d given enormous amounts of money to charity in the days after the attacks, including a $10,000 donation to the Twin Towers Fund, one of the two foremost charities handling charitable giving and support for the 9/11 attacks. The Twin Towers Fund was dedicated to first responders and their families, especially families who lost a first responder in the attack; they disbursed $216 million before closing.

Reviews of charity records, however, showed “no evidence” that Trump or his foundation gave any money to the Twin Towers fund or its counterpart, New York City Public/Private Initiatives Inc. While he received praise and credit for that donation on Howard Stern’s radio show, the money never showed up in charity records or IRS forms.

Furthermore, while reviews of Trump Foundation giving have found hundreds of thousands of dollars in charitable donations over the years, there are no donations to 9/11 charities — except one, a $1,000 donation to a Tom Cruise-founded “Workers Detoxification Fund” that used Scientology-approved methods to “detox” rescue workers.

The Mystery of the Missing Muslims

Trump also claimed to have seen “thousands” of “Muslims” on “rooftops” cheering the 9/11 attacks as they went on, a claim that has yet to be verified or even substantially corroborated by anyone beyond a few fringe internet sources.

Last year, in a campaign speech in Buffalo, N.Y., Trump said he “watched our police and our firemen down on 7/11, down at the World Trade Center, right after it came down.” He likely meant 9/11, not July 11 or the convenience store that carries the Slurpee.

During the campaign, Trump also blamed former president George W. Bush for the terror attacks, claiming Bush failed to listen to the CIA.

This year, during an interview with the Associated Press, he claimed to have given CBS’ “Face the Nation” its highest ratings since the show’s coverage of the 9/11 attacks, with “5.2 million” people.

This story was originally published September 11, 2017.