Menu
Follow us
Search
Menu
Search
FILE - In this June 19, 2017, file photo, a user gets ready to launch Facebook on an iPhone, in North Andover, Mass. Seattle Ethics and Elections Commission said in a statement Monday, Feb. 5, 2018, that Facebook is violating city and state laws that require disclosure of who pays for political advertising. (AP Photo/Elise Amendola, File)

Facebook is updating the algorithms that power your News Feed again. But don’t worry, if you’re concerned about not getting Rare’s trustworthy news and entertainment stories worth sharing, we’ve got a solution for you with this quick and easy way to make sure you’re seeing exactly what you want in your News Feed.

The new change will essentially demote content from media sites like Rare.us as Facebook seeks the right balance of news and personal posts on your page by focusing on “meaningful interactions” and content from your friends and family. Thankfully, there’s a fix you can put in place so you won’t miss any of the news you want each day!

1. Click the page or profile you want to see first (assuming you’re already a friend or follower of this page).
2. Click the “Following” button, and a dropdown menu will appear.
3. Click “See First,” and you’ll always see our content! 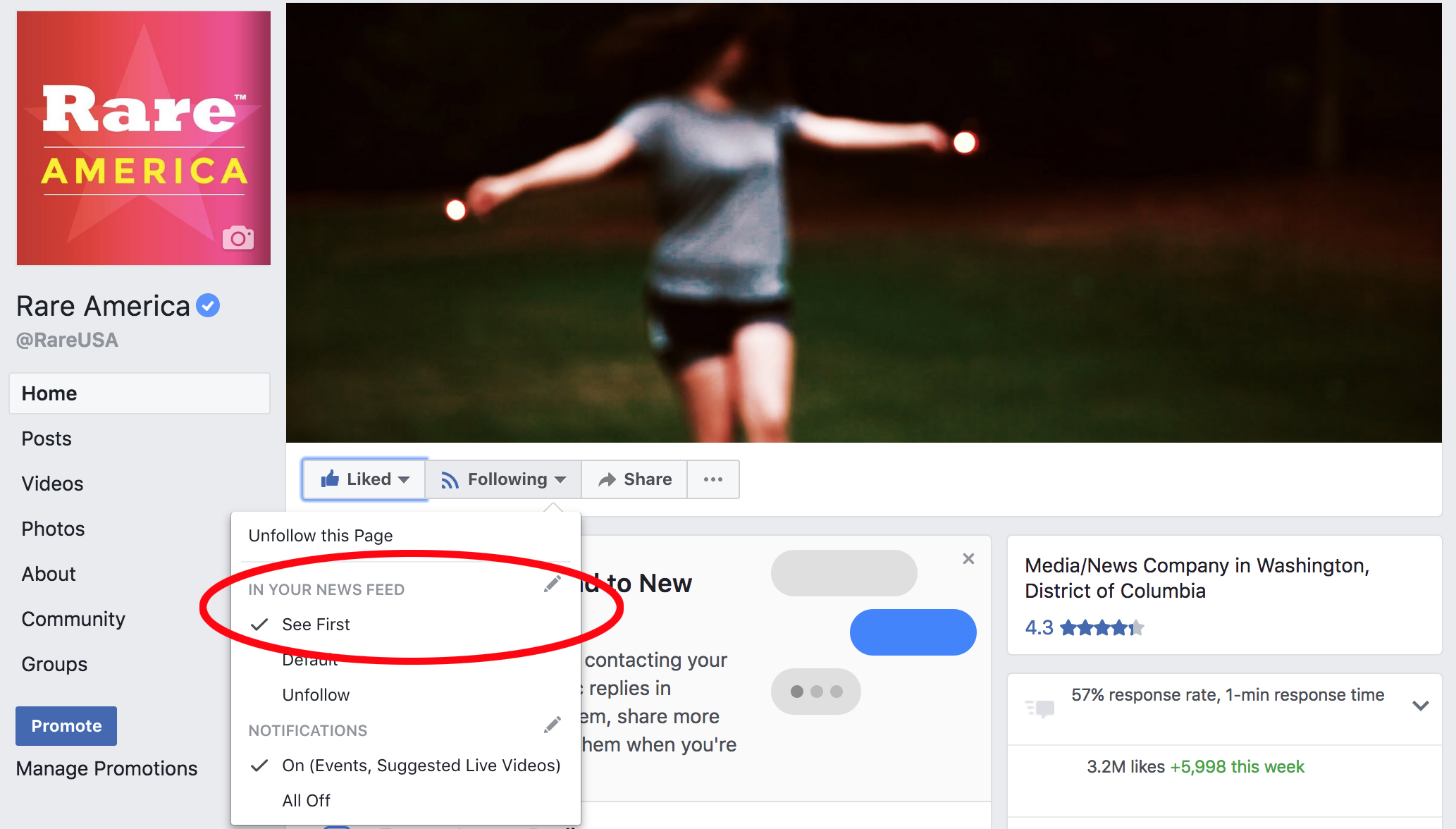 This most recent Facebook announcement probably seems familiar — we’ve seen this sort of thing happen several times over the past few years. But these steps can help you take back your Facebook News Feed to keep the platform fun, entertaining, relevant and informative. You can take these steps with Rare, other news sites you enjoy reading and even your close friends.

You can also adjust these settings in the left hand navigation bar in desktop. Look for the three little dots to the right of “News Feed” and go to “Edit Preferences.” 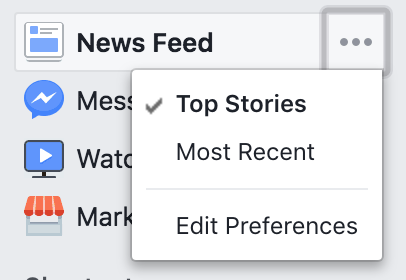 There, you can take back control of your News Feed by prioritizing a full list of who you’d like to see first: 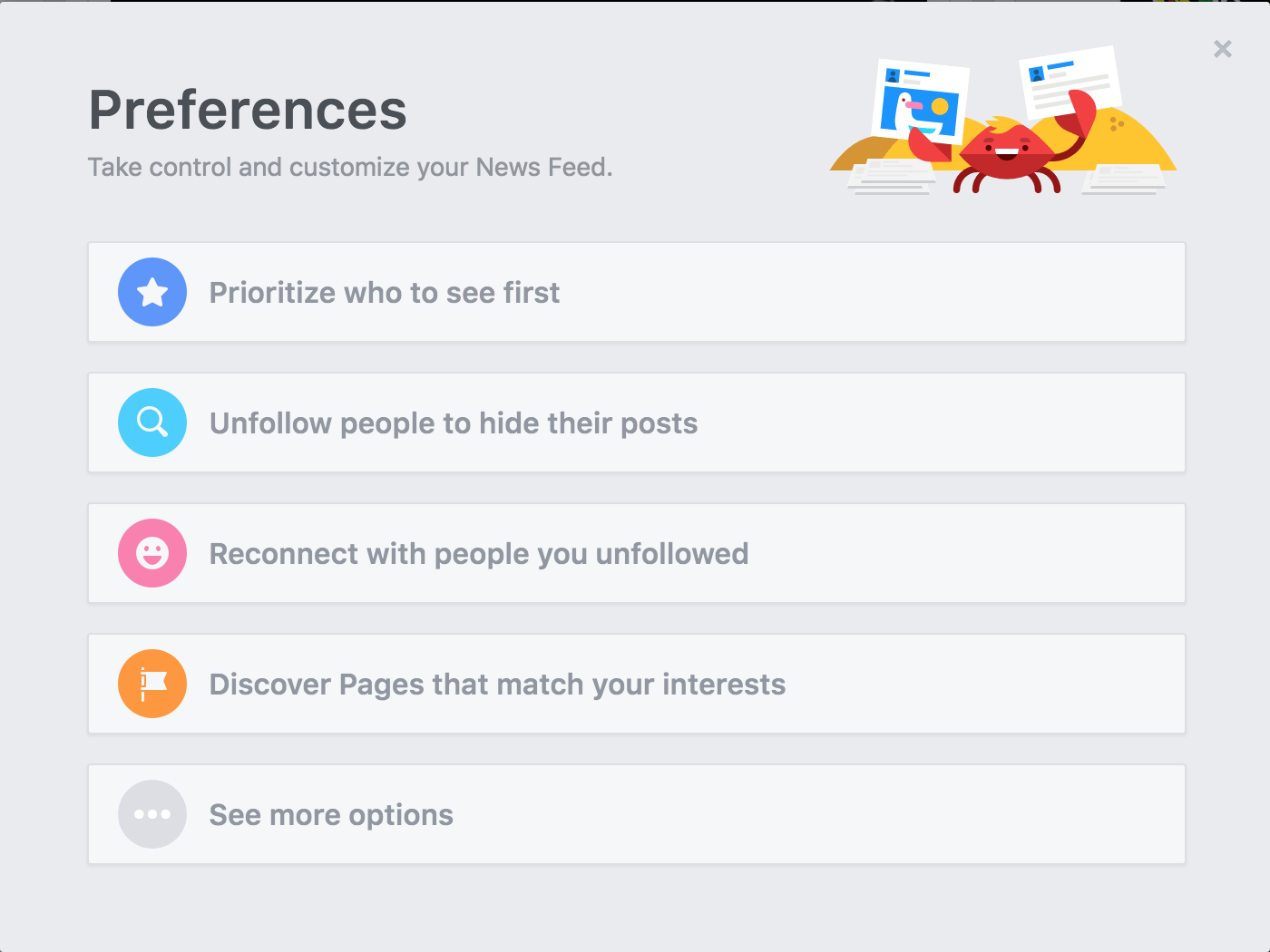 Every action you take on Facebook tells the platform what you like, so interacting with content you want to see more of will help keep your news feed the way you want it. Liking content and commenting tells the algorithm which types of posts and stories you’d like to see more of. In the top right corner of every post, you’ll see three small dots that give you some options to take control too. You can save the post, change your following settings for that poster or give feedback to Facebook, and you can report the post if you feel it has violated the community guidelines (that it contains nudity or contains speech, not that you don’t like it or don’t agree with it). 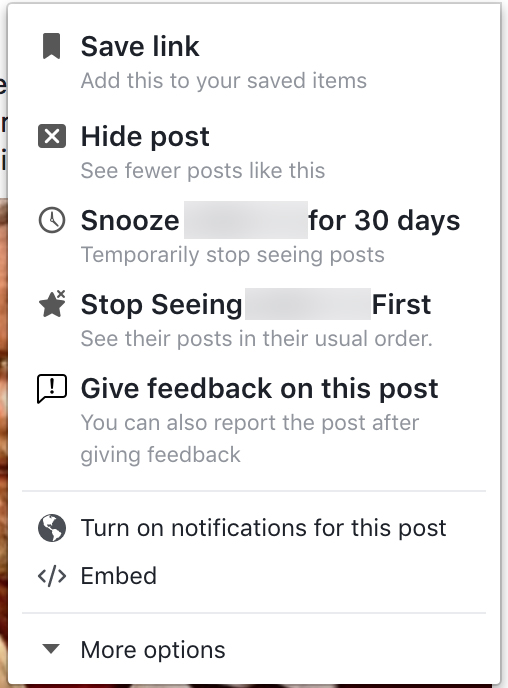 With Facebook’s new emphasis on posts from family and friends in your News Feed (yes, even those old high school friends you haven’t talked to in years), here’s something to be aware of: Criminals may attempt to trick you while masquerading as someone you know. They’ll even use your contacts’ actual Facebook pictures.

Per Clark, Elizabeth Holton penned a story for the Better Business Bureau in which she wrote, “I received a request from Linda (name changed), a relative I was already friends with on Facebook. Odd, I thought. Perhaps her account was shut down, and she had to start a new profile?”

But according to Elizabeth, her new Facebook “friend” began asking some questions that were out of the ordinary, and she began to get the feeling that something wasn’t quite right.

Then finally, this friend wrote this to Elizabeth: “I am so happy I got 200,000$ in cash from the National world help company … Did you not get it they have been helping the poor people and Retired, Unemployed, Worker’s, Disable, and people’s like us who are in need of money to make there possible living.”

At this point, Elizabeth knew it was a scam, so she reported it to Facebook and blocked the user.

Another pitfall to be aware of: When you’re on Facebook, be careful if you get a friend request from a big country music star thanking you for being a fan. It’s probably a scammer just trying to get into your wallet.

Fans of money expert Clark Howard have been sharing on Facebook that scammers masquerading as popular country superstars are on the uptick.

Lisa wrote in to say that she’d received a couple of these messages: “I have had several Facebook friend requests from ‘country music stars’ [saying] that I had liked their FB page. One was supposedly Tim McGraw and the other was supposedly Trace Adkins. They thank me for being a fan, develop a little conversation, then tell me the security company they have been using is closing and they need a dependable person to receive and hold their briefcase.”

“Said briefcase allegedly contains a HUGE sum of money, concert tickets, etc .… The briefcase will be delivered to me via a courier service and I must pay the fee to get the briefcase, which will be returned to me tenfold,” she wrote. “The fee? $800! Please let people know. I notified local law enforcement who didn’t care. The [scammers] actually got very ugly when I refused.”

While Lisa’s experience shows that the names of Tim McGraw and Trace Adkins are reportedly being used by scammers, it isn’t limited to those two country stars, nor is this kind of scam a new thing.

What you can do to stay safe

Clearly, the threat of running into a bogus celebrity Facebook profile isn’t limited to the world of country music. So here are some tips to keep you on the straight and narrow:

RELATED: Beware of Facebook games that could steal your info

We’ve all seen a lot of emotional posts and images on Facebook, and it’s almost second nature for many people to “like” just about anything, whether to acknowledge they saw the post or just because they’re so used to it by now.

Sadly, while some of these posts about children in need are real, most of them are fake; they’re scams called “like farming” that crooks use to trick unsuspecting Facebook users into handing over info or becoming a victim of some other type of dishonest scheme.

Scammers post images and stories that will grab users’ attention in order to entice them to like, comment and share. And as more people engage with the post, the more it continues to pop up in users’ News Feeds — which means more exposure for the scammers.

You may hesitate and wonder if the story is actually real, but since thousands of other people have commented or liked it, what harm could it really do if you simply just like the post or or page to see what it’s about?

How the scam works

The post or page may be about anything, but it will always be something that grabs your attention.

For example, you may be scrolling through your News Feed and and see a horrifying image that tells the story of a sick or injured child who needs help. The post has thousands of shares, likes and comments, and it asks users for some type of donation.

The posts may request help in a few different ways. Here are some examples:

The crooks will then collect information from any users who interacted with the post or fake page in order to carry out some type of scam.

Even if the post doesn’t ask for you to provide any information or donation — maybe just a like — it could still come back to haunt you. Very often, once a post like this gains enough traction — a certain number of likes, shares and/or comments — the scammers will go back into the post and edit it to include something malicious.

In some cases, the scammers will spam users directly, requesting more info — related to the fake story or donation plea — or sell the user’s personal and contact information to other criminals.

Scammers use fake Facebook pages to do the same. Maybe you liked some random page about animals that a lot of people were suddenly interested in, then all of a sudden (even months later), the scammers will use the page to send out spam and scam posts, which may include phishing scams, malicious downloads or fake notifications that you’ve won a prize. And since you liked the page, all of the scammers’ posts will appear in your News Feed.

Then all it takes is one post to trick you into entering your phone number or other personal data to claim your prize — or whatever the fake post is offering. Any of the various tactics used by the scammers may result in stolen credit card numbers, banking info and other sensitive data, according to the Better Business Bureau, Clark reports.

Variations of the scam

The goal is to grab your attention and get you to take some sort of action — whether it’s to like, share or comment on the post — by offering something in return. A few common ways scammers get you to engage include:

Basically, the scammers are preying on people’s emotional vulnerabilities to trick them into taking action before even thinking about it, whether by using a fake, horrifying picture of a sick child or by promising users something in return.

If a post claims you will get something free in return for liking, clicking, sharing etc., it’s most likely a scam, regardless of how big or small the freebie is.

There are a couple of common goals that criminals have when carrying out any type of scam on Facebook:

Other red flags that an offer or company on Facebook is fake:

What to do if you’ve responded to an alert or other notification that you think could be a scam: