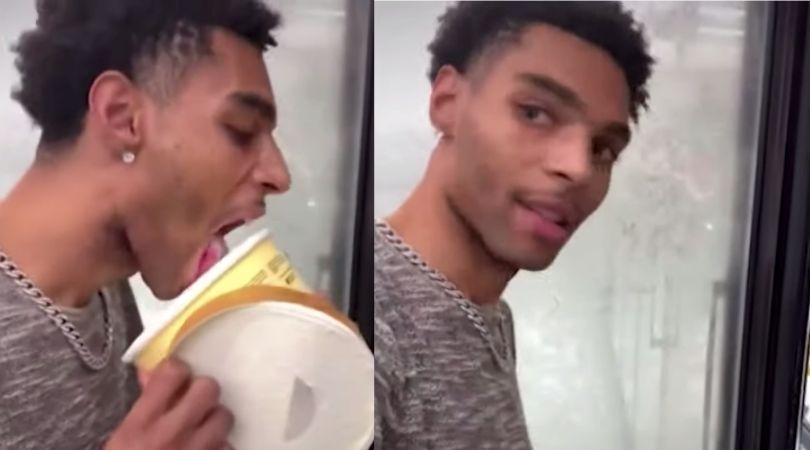 Oh, look, another ice cream licker who thought he could get away with it. Again, ladies and gentlemen? Didn’t we leave food tampering behind? Did we learn nothing from the previous incidents? Apparently not. So that’s why D’Adrien Anderson will spend 30 days in jail after licking a tub of ice cream at a Walmart in Port Arthur, Texas.

Anderson was seen in a viral video taken back in August 2019 opening a half-gallon container of Blue Bell ice cream and licking ice cream before putting it back in the freezer. But, there was a small plot twist to the incident. When asked by authorities if they had proof of the incident, Walmart says surveillance video showed Anderson takes the ice cream and purchasing it.

Which I mean, it’s appreciated, at least he purchased it. So his germs weren’t exposed the public. But still, gross. Authorities stated that he and his father also returned to the grocery store to show officers his receipt for the ice cream. Anderson’s father confessed his son was only trying to get Facebook likes and didn’t mean any harm from the prank.

But, Port Arthur police did not find it humorous one bit. Which is why the 24-year-old was charged with criminal mischief in the incident. Along with serving 30 days, the licker will be required to complete 100 hours of community service and pay a fine of $1,000. Yup, the most expensive ice cream he will buy in his life.

After the video of the Texas man went viral, authorities stated it cost Blue Bell Creameries a total of $1,565 to replace all of the ice creams in the display case. So, Anderson will also have to pay restitution in that amount to Blue Bell. Which, I mean, is understandable! There is justice at last.

But honestly, I was surprised he even got jail time, this man did end up buying the ice cream after all. I think 30 days in jail for liking ice cream is excessive. I blame his lawyer for this whole mess because well, he also got community service and a fine. He could have easily just gotten community service. Can you imagine trying to apply for a job and saying you were arrested for liking ice cream? Geesh. But hey, lesson learned. This is why you shouldn’t tamper with food, y’all.