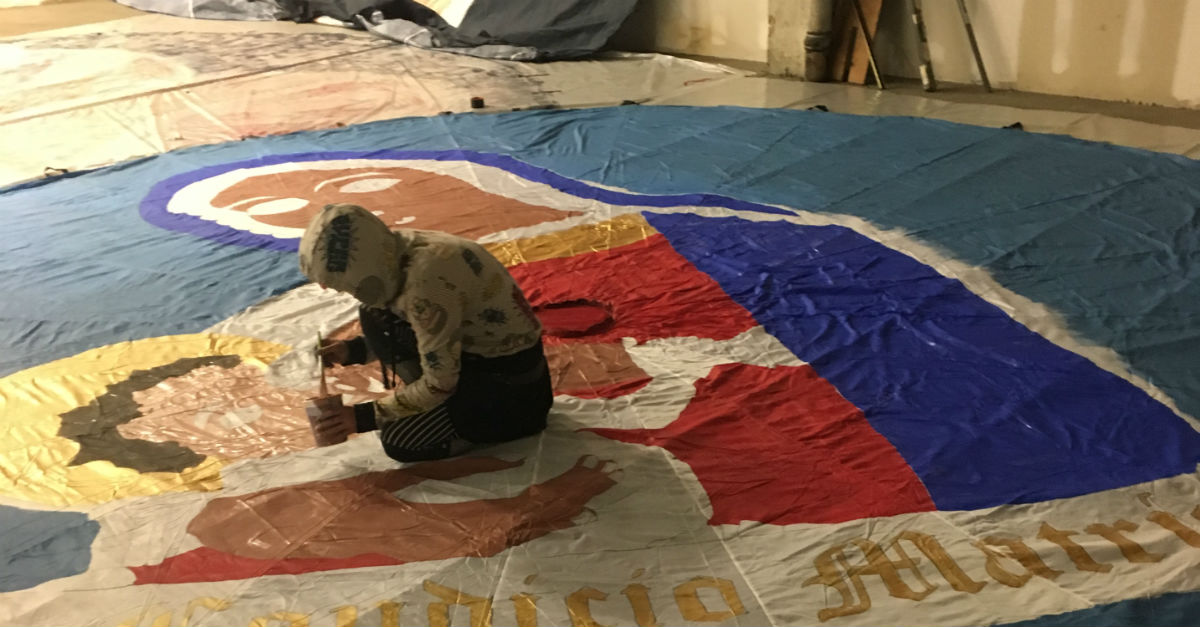 WASHINGTON, D.C. — The Maurice Electric Building is a massive warehouse that has been transformed into an art studio, yet there are no canvases to be found. The artists, a diverse group of twenty-somethings, create a scene straight out of Brooklyn —borderline hipsters in wide-brimmed fedoras and scuffed Vans sneakers.

Though the Women’s March on Washington is a politically-driven event, the words “Trump” and “Hillary” are noticeably absent. Instead, the organizers and artists chomp on Papa John’s pizza and talk about last week’s episode of “The Young Pope” or how “The Blair Witch Project” was “overrated.” A paint-splattered boombox in the corner blasts Wu-Tang Clan, and then a moment later, an iPhone is traded off and the opening bars of a TV on the Radio song echoes through the open space. If you didn’t know, you would have guessed their candidate won — there are no frowns, only smiles, and not a minute passes without a ripple of laughter. The artists are mostly locals, though there is one from Los Angeles and a few more from New York. These men and women are painting parachutes, a medium that is odd even for these more experimental types but is perfect for a march. And that’s exactly what this hodgepodge group of millennials is gearing up for.

“That’s the latest estimate from The Department of Homeland Security” he said, before adding, “twice as much as we expected.”

The march was born the day after Donald Trump was elected president, and there are “sister marches” in cities around the world in nations as far-flung as Japan and South Africa. The event will indubitably include hundreds of thousands of women from all over the world. On the event’s Facebook page, Bobbi de Córdova-Hanks writes, “At almost 81, this is my last hurrah for Women’s Rights that I’ve been working toward for decades. We deserve every right that we’ve been denied for so long from equal pay on. No one should ever be able to tell us what we can or cannot do with our bodies. I am so proud to be able to be a part of this! Love to all my sister marchers!”

Stephanie Holland, a 35-year-old Washington, D.C., native, said she got involved in the movement almost three weeks before Trump’s inauguration. She got the word out via a single e-mail to the D.C. female art community.

“The idea,” she said, “is that parachutes save lives. This was an awesome opportunity for creatives to come together and ‘artify’ the march.”

“Art will be the heart of the march as it will live on in memories for everyone,” Holland told Rare.

The Women’s March Organization, which has headquarters in New York and Washington, D.C., commissioned the public relations, paid for the building, the artists, the supplies and even the pizza.

Superwaxx is young artist from Richmond whose influences include cartoons and animation, and her parachute bears the image of powerful woman with a touch of street art. Emblazoned across the top the parachute is a single word — “powherful.”

She told Rare that she hopes her parachute “communicates to women of all ethnicities and backgrounds.” Superwaxx works in the city during the day, but she’s been busy inspiring women her whole life. She said her expectations “aren’t too high” for a Trump presidency and that she’s “putting her hopes and faith into the community of uniting against discrimination, prejudice, racism and inequality.”

Leda Maliga is a Los Angeles-based producer who said they did the did the exact same thing in her hometown last week.  “It’s a coordinated effort to lift up the voices of artists and women fighting for justice.”

She flew into Washington, D.C., from LAX at 9 p.m. and was at the warehouse by 10. A press release from the group says, “The monumental body of work will honor those women who lifted their voices to claim their future in these uncertain times — those who did not stay home, but instead took to their streets to make sure our freedoms are protected. This art will shape American discourse for future generations.”

As of Jan. 20, these women and the rest of the United States have a new president to lead their nation for the next four years, and they are determined to make their voices known. The marches, they say, will set a discourse for the next few years. But in the middle of the night during the last hours before Donald Trump was sworn in, they were happy dancing to James Brown.