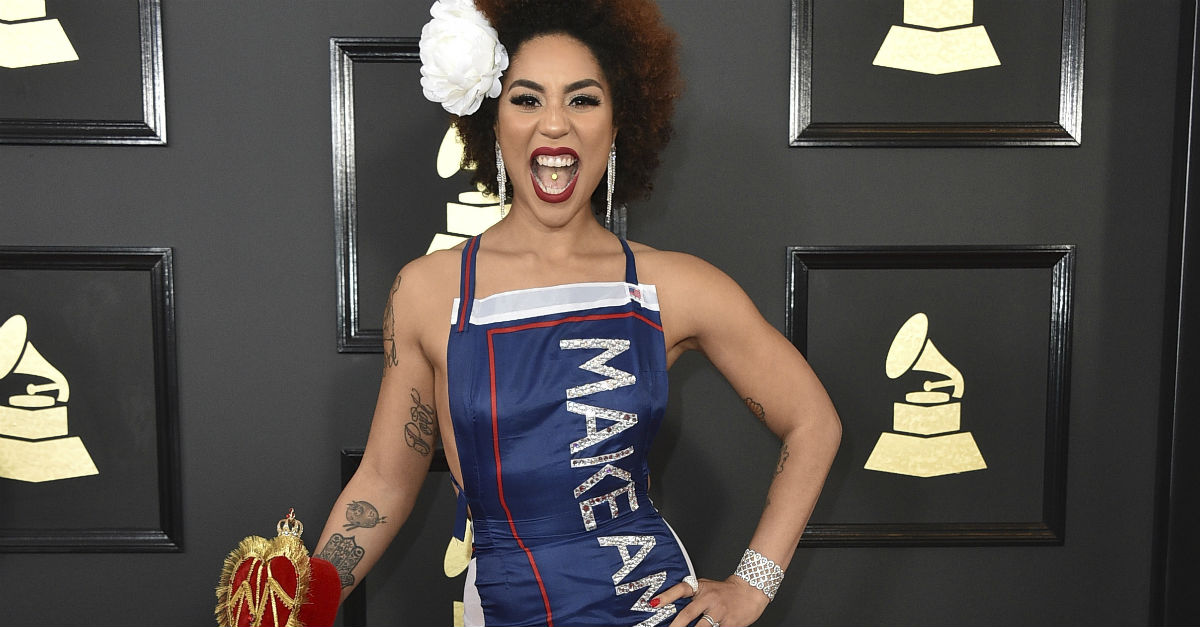 All eyes were on Joy Villa when showed up to the 59th Annual Grammy Awards wearing a dress that said “Make America Great Again” and “Trump” on it. Reactions to the artist’s fashion choices were predictably negative, though she did see sales of her album skyrocket the day after.

“I am 100 percent a Trump supporter. I believe in his message; I believe he will run this country like he runs his life, successfully,” Villa revealed in an interview with Fox News. “I stand as a proud American and I stand for a unified America that is tolerant of each other no matter who we voted for. I stand behind our President because that?s the American thing to do. I believe in love, above all.”

RELATED: The Grammy Awards haven?t even started, but there?s already been an artist making a political statement

According to The Hollywood Reporter, Villa’s dress was designed by Andre Soriano.

Soriano himself is a Filipino immigrant.

The designer revealed that he supported President Trump regardless of Trump’s recent, controversial immigration ban from seven Muslim-majority countries in the Middle East.

Soriano has worked with Villa before and is the source behind a revealing orange gown, or “fence dress,” she wore some years back.

Me and the amazing @kellyosbourne at Grammys 2015 😘💕😊 she loved my wild style, I adore her… https://t.co/Ccl1XlAwuS pic.twitter.com/wSkAX80YuE

Of their friendship, Soriano said, “I always channel Joy?s music as a designer ? we?re both artists, and I love her so dearly.”

He spoke not only highly of her, but also of Trump, saying “She is one of the people on this planet that really promotes love. We need to move this country forward, and we believe it?s time to promote love. We only live once, and we need to promote love. We have one president now who is going to do the best thing for planet America.”

When asked about his inspiration behind the dress on Sunday evening, Soriano said: “I heard that somebody wanted to bomb the White House. And then I saw the Women?s March. [?] Joy Villa is all about love with her music. I?m like, ‘Joy, We have to make a statement on what is right for our country, of what we believe in, for the Constitution.'”