Federal Bureau of Investigation director James Comey testified before Congress this week, and one shocking revelation to come from his testimony is that the bureau is investigating whether the Trump campaign coordinated with Russia.

The fact that the bureau is investigating whether or not there were ties between Russia and the Trump campaign is a fact many Americans would want to, or should, know. However, Fox News’ “FOX & friends” didn’t seem to seem to think it would be of much interest to the general public as evidenced by a tweet they sent out that read, “If you missed yesterday’s congressional hearing with FBI Dir. James Comey, you didn’t miss much…” The 25-second video featured in the tweet shows Director Comey either saying he won’t answer or saying “same answer” over and over again.

If you missed yesterday's congressional hearing with FBI Dir. James Comey, you didn't miss much… pic.twitter.com/AnJdtWcGxK

CNN’s Jake Tapper took issue with their assertion and fired off his own tweet, writing, “False. Quite consequential. FBI confirmed it is investigating whether Trump campaign coordinated with Russia.”

False. Quite consequential. FBI confirmed it is investigating whether Trump campaign coordinated with Russia. https://t.co/ROcDGl4weP

The previous day, on his CNN show “The Lead with Jake Tapper,” he pointed out that Fox News wasn’t covering Comey’s testimony Monday afternoon, and instead, chose to cover Neil Gorsuch’s confirmation hearing.

After a discussion with his panel, where his guest, Clarissa Ward, said that Russia Today didn’t cover Comey’s hearing – which most likely points to a “conscious uncoupling” between the Kremlin and Trump – Tapper made sure to mention that Fox News wasn’t covering it, either. 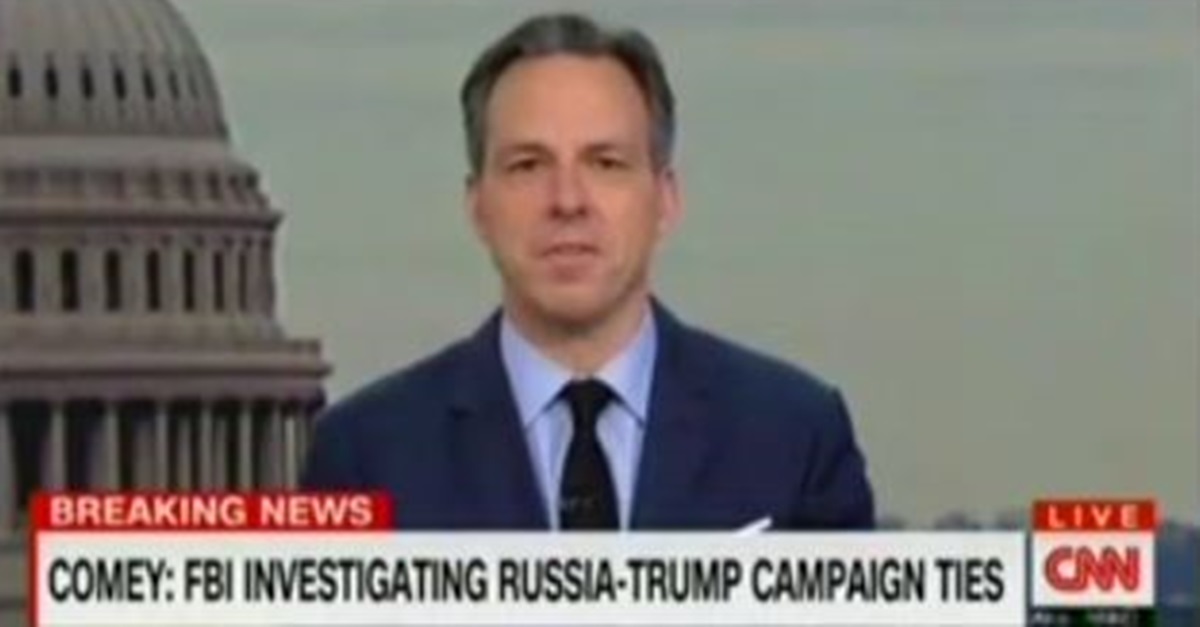