Have you ever said something and heavily regretted it later? It seems that that is precisely what must be happening with James Corden right now. In a bizarre twist of events, James Corden is being hung out to dry… because Pierce Brosnan was once rude to him at a U2 concert.

Okay, so why does the internet seem to hate Corden right now?

Our story begins with an episode of The Late Late Show with James Corden. It is January of 2017 — so, almost six years ago. He and Khloe Kardashian were playing a game of “Spill Your Guts or Fill Your Guts.” The two were seated at a rotating table. On that table were the following delectable items, arranged fancifully as hors d’oeuvres:

In this game, the two take turns reading hard-to-answer questions to each other after choosing which nasty glass of “food” the other has to ingest. If they can’t answer, they have to eat what has been placed in front of them.

After Corden challenged Kardashian with some cod sperm, she placed bird saliva in front of the host. She read a question from a prompt card, which was about naming a celebrity who had been rude to him at a party.

To his merit, Corden really didn’t want to name the person who came to his mind. He sincerely grappled with drinking the glass of bird saliva and even mentioned how they may want to invite this person as a guest in the future. But after Khloe egged him on a bit, he named the celebrity: Pierce Brosnan.

Pierce Brosnan Allegedly Shoved James Corden at a U2 Concert

Corden went on to describe a U2 show that he, his wife, and another couple were attending. He said Brosnan was there with other people, hanging nearby to Corden. About halfway through the show, Brosnan left with his people for a bit and then returned. While Brosnan was gone, which Corden said was a good amount of time, Corden and his group moved into the area where Brosnan had been standing.

Bono was like, right here on this sort of big runway in the middle of the show. It was at the Forum. So, me and my wife moved into this area. And literally, I’ve never felt anything like it. This arm went on here,” he pointed to his right shoulder, “and just pushed me out of the way. And I looked at him like that, and he didn’t even glance at me. He just moved back into his area, just like that.

James Corden Talking About How Pierce Brosnan Shoved Him

When Kardashian suggested that perhaps Pierce Brosnan “was drunk,” James Corden said, “Maybe he was just a bit f***ing rude.”

“I can already feel the booker of our show in that room going, ‘No!!!!!’” Corden added.

It was all fun and games, but little did Corden know that, in the era of the internet, six years means absolutely nothing when the public wants to rake you over the coals later.

As it turns out, Corden can be a bit of a prick as well. Maybe it’s the fame or maybe he’s just a bit f***ing rude, but apparently, he reamed out the waitstaff at a fancy restaurant and got 86’d. Not just that, but the owner of the restaurant took to social media to go on the warpath against Corden.

While dining at the French restaurant Balthazar in New York City, Corden flipped out when his wife’s order didn’t go right. The owner, Keith McNally, publicly denounced Corden and called him “a tiny Cretin of a man.”

“James Corden is a Hugely gifted comedian, but a tiny Cretin of a man. And the most abusive customer to my Balthazar servers since the restaurant opened 25 years ago,” McNally captioned a photo of Corden. He went on to describe not one, but two incidents at Balthazar in which Corden verbally abused his staff. The first was this past June and the second was October 9th.

Mr. Corden’s wife ordered an egg yolk omelette with gruyere cheese and salad. A few minutes after they received the food, James called their server, M. K. and told her there was a little bit of egg white mixed with the egg yolk. M. K. informed the floor manager, G. The kitchen remade the dish but unfortunately sent it with home fries instead of salad. That’s when James Corden began yelling like crazy to the server: ‘You can’t do your job! You can’t do your job! Maybe I should go into the kitchen and cook the omelette myself!’

McNally continued explaining that the staff gave Corden complimentary champagne. He said that the server was “very shaken” but finished her shift.

After McNally called out Corden publicly on October 17, Corden called him right away. That same day, McNally posted yet another photo of Corden to Instagram.

“James Corden just called me and apologized profusely,” McNally wrote. “Having f***ed up myself more than most people, I strongly believe in second chances. So if James Corden lets me host his Late Late Show for 9 months, I’ll immediately rescind his ban from Balthazar…. All is Forgiven. Xx”

One week later, Corden spoke to The New York Times about his bad behavior.

“I haven’t done anything wrong, on any level,” he said, adding, “I just think it’s beneath all of us. It’s beneath you. It’s certainly beneath your publication.”

And McNally responded by, you guessed it, posting another photo of James Corden to his Instagram account.

I’ve no wish to kick a man when he’s down,” McNally wrote. “Especially one who’s worth $100 Million, but when James Corden said in yesterday’s NY Times that he hadn’t done “anything wrong, on any level,” was he joking? Or was he denying being abusive to my servers? Whatever Corden meant, his implication was clear: he didn’t do it… If the supremely talented actor wants to retrieve the respect he had from all his fans (all 4 of them) before this incident, then he should at least admit he did wrong. If he goes one step further and apologizes to the 2 servers he insulted, I’ll let him eat for free at Balthazar for the next 10 years.

A Good Egg Is Hard to Find

Oof. Corden obviously was kicking himself when he realized he and his wife’s chances of finding fine pâté and steak tartare in New York City were rapidly being flushed down the toilet. He knew what he had to do and made a sincere apology on his late show last week.

This pleased Mr. McNally, who posted a fourth photo of Corden to his Instagram.

Last Night on his TV show, James Corden very graciously apologized for his outburst at Balthazar. It takes a real man to do this. In the past, I’ve behaved much worse than Corden, but wasn’t man enough to apologize. For this reason, I’m going to lift the ban on Corden and impose one on myself instead. I’m going to ban myself from Balthazar for 2 weeks. People who live in Glass Houses…

But the thing is, if you’re scrolling through social media, you’re probably not looking up the original dates of the viral content you’re seeing. People are not letting Corden down for calling another celebrity rude. The irony, of course, is that the whole Pierce Brosnan reveal occurred over a glass of bird saliva.

Maybe Corden should have drunk the bird excretions. Or maybe this is a lesson to everyone to be kinder to each other. 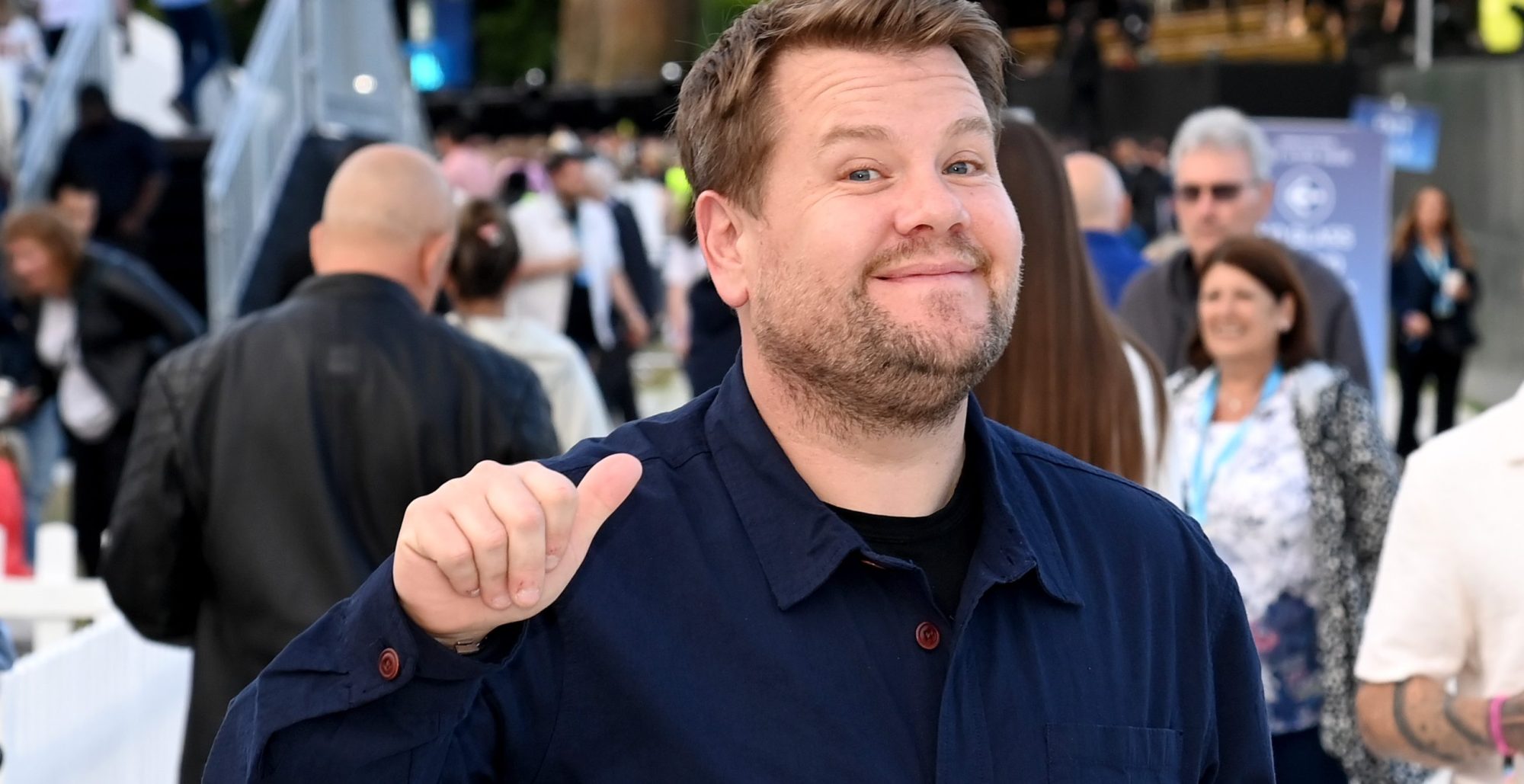