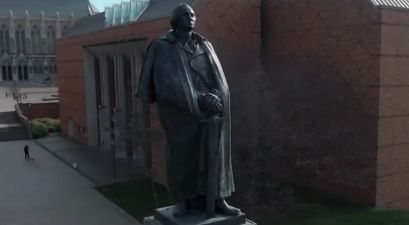 In Manhattan, New York, intensity over the 2020 election escalated into more division and conflict as Sunday’s rally organized in favor for President Trump’s reelection called “Jews for Trump” drove caravans through Times Square. As they drove their caravans with huge “Trump 2020” flags hanging high, they were met with anti-Trump protesters who were marching from Brooklyn. And the clash between the two resulted in 11 people getting arrested, people screaming at Trump’s personal lawyer Rudy Giuliani, and a New York City police officer suspended without pay for showing his support for President Trump while on the job.

The New York City’s former mayor, Rudy Giuliani, ran into counter-protesters who were going after Jews for Trump. Police officers said that when the pro-Trump supporters ran into the anti-Trump supporters, they got out of their cars to confront those protesting the president. As the two sides clashed, political slurs were being thrown everywhere, from “fascist” to “anarchist.” Videos show Trump supporter flags being pulled down and put back up as police broke the two groups apart.

Eggs were also being thrown, among other things, at cars holding Trump flags while other Trump campaign supporters held banners as they were shouting insults saying, “New York hates you.” Giuliani was driving down Fifth Avenue when he encountered Sunday’s car parade and said, “I would love to have had a campaign commercial of it and put it on in the middle of America and say, ‘Who would you prefer for the next four years? This group of foul-mouthed people who don’t seem to have a vocabulary beyond three words, or these very nice Jewish people who are driving in the car and not saying anything back and not doing anything other than exercising their right to say they’re for Donald Trump.”

And as top police officials have strongly expressed the importance of police officers remaining neutral while on the job in order to prioritize the safety of everyone around, an unnamed NYPD police officer lost control and responded to someone who had called him a “fascist.” He used a police loudspeaker and decided to shout out in the midst of the chaos, “Trump 2020. Put it on Youtube. Put it on Facebook. Trump 2020.” He is now suspended without pay for his actions.

Brawl fight breaks out between MAGA and Antifacists in Times Square, New York

According to the Jews for Trump website, Sunday’s rally was intended to show unity with “the beleaguered Red Zone community,” referring to COVID-19 hot spots that New York Gov. Andrew Cuomo had designated as areas where schools and nonessential businesses must close to prevent the spread of the coronavirus. It was a response organized by Boris Epshteyn, an adviser to the Trump campaign and co-chair of Jewish Voices for Trump, following weeks of tensions in Brooklyn’s Orthodox Jewish neighborhoods because of the coronavirus restrictionss. It was also supported by City Council candidate and leader of Brooklyn protests, Heshy Tischler, on Twitter.

Trump convoys drove from Coney Island to Trump Tower in Manhattan, with the end of the car parade landing in Brooklyn’s Marine Park. As passengers waved American flags, the physical fights resulted in 11 people getting arrested. Five men and two women are expected to be charged with disorderly conduct. Investigators are also looking for two other people seen throwing projectiles at a pro-Trump caravan that was traveling on the Brooklyn HIghway Overpass. Those who were arrested have all been released except one 36-year-old man who threw eggs in the faces of two police officers.

NYPD is looking for these two people throwing projectiles at cars with Trump 2020 flags:

This incident is currently being investigated by the @NYPD84Pct Detective Squad. @NYPDShea @NYPDnews @NYPDTips pic.twitter.com/p8Ok4T2rN9

Talk about a greatly iconic time for the United States. It takes mad skills for a country to become this divided after making a pandemic more political than it should be.