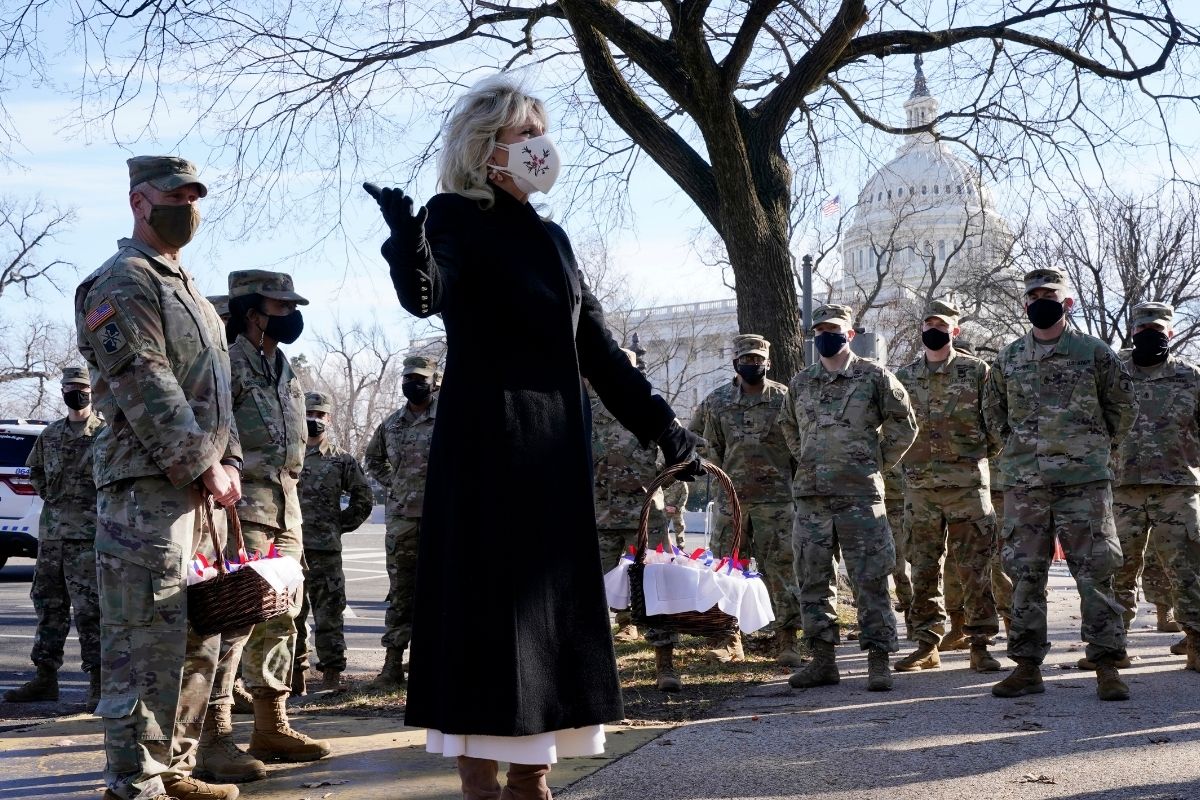 First Lady Dr. Jill Biden made a surprise visit to the National Guard troops that were stationed at the US Capitol so she could deliver them cookies made from the White House. The stop was not on Biden’s schedule, but it was made in an effort to show her gratuity towards the troops for protecting her family and Washington DC on Inauguration Day. Joe Biden was sworn in as the 46th President of the United States, while Kamala Harris was sworn in as Vice-President. Biden’s visit came specifically after several reports had surfaced of some national guard members being forced to sleep inside a parking garage. Addressing the troops stationed outside the US Capitol, Biden said, “I just wanted to come today to say thank you to all of you for keeping me and my family safe. I know that you left your homestates.?

Biden then went on to mention how her family was a National Guard Family due to their late son Beau, who served for the branch. She continued, ?Our son Beau was a Delaware Army National Guard. He served for a year in Iraq from 2008 to 2009. So I?m a National Guard mom and when I saw ? all that you?ve done and you left your home states and you?ve come here ? I just wanted to say thanks from President Biden and my entire family.?

"I just wanted to come today to say thank you to all of you for keeping me and my family safe … The White House baked you some chocolate chip cookies." pic.twitter.com/lv33IZeblq

While addressing the troops Biden was seen holding a basket of chocolate chip cookies, that were baked as a thank you to the members who worked to protect Washington DC in the recent weeks following the Capitol riot. Joking that she couldn’t have baked them all herself, she stated the White House baked them and wanted to give each and every member a cookie as a small thank you for their service and their military families? service. The hilarious and adorable visit came after thousands of National Guardsmen were told to vacate the US Capitol and be forced to rest in a nearby parking garage. Apparently, the group had no internet service, only had one working outlet and one bathroom with two stalls for 5,000 troops.

Backlash quickly erupted after the pictures circulated of the members in the parking garage, given that they were in Washington DC to protect and serve the national Capitol. There were reportedly 20,000 troops in Washington DC for Inauguration Day. President Joe Biden called the chief of the National Guard Bureau, General Dan R. Hokanson, and apologized for the situation, asking the General how he could fix what had occurred. As far as a reason exactly why the troops were moved and who ordered the removal still remains unknown. Unfortunately, this still continues to spark criticism on social media from several State Governors and members of Congress.