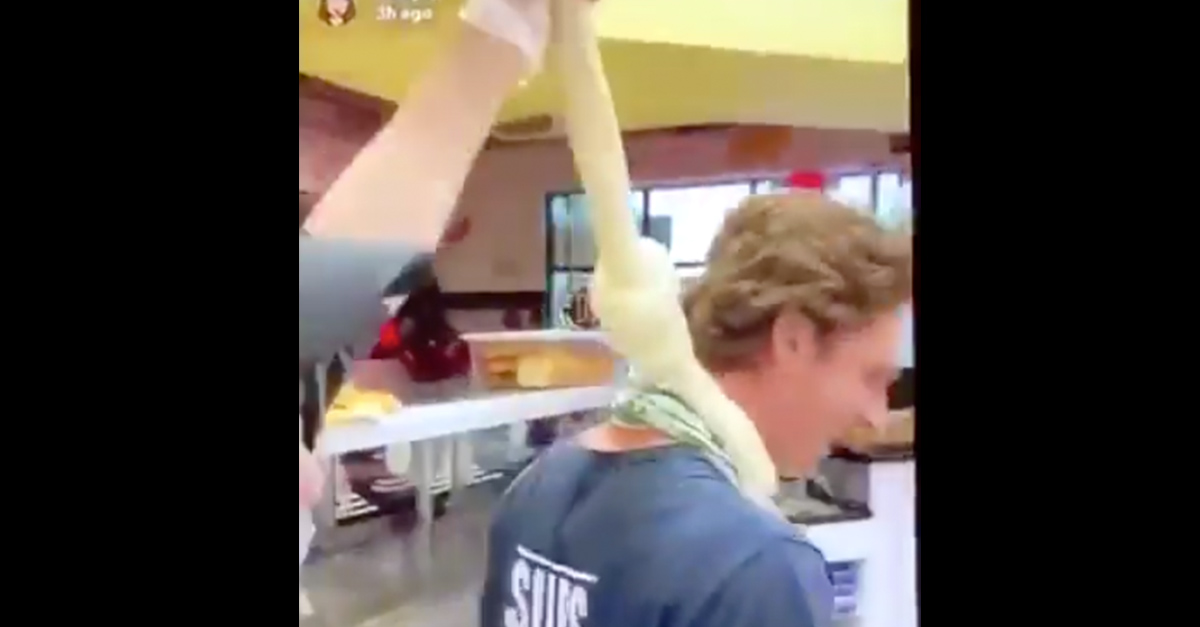 Jimmy John’s employees at a store in Woodstock, Georgia have been fired for inexplicably filming themselves even more inexplicably playfully hanging an employee with a noose they made out of raw bread dough. Or, maybe the filming and sharing of the bread noose execution was the more inexplicable part? It’s all so insane and painfully stupid that it’s hard to tell. But it also doesn’t really matter.

The Jimmy John’s employees, who apparently had no previous contact with the internet prior to filming themselves having some racist lawlz with a bread noose, posted their antics to Snapchat on July 4th adorned with the social media platform’s celebratory Fourth of July banner.

In Woodstock, GA at a Jimmy Johns, some white employees made a noose, look at the DETAILS in the damn noose dough that’s used for sandwiches. Crazy. They done this before…. pic.twitter.com/HylIMFvxxF

Jimmy John’s was quick to release a statement condemning the incident:

“We have zero tolerance for racism or discrimination in any form,” Jimmy John’s said in a tweet. “The franchisee has taken immediate action and the employees have been terminated. The actions seen in this video are completely unacceptable and do not represent the Jimmy John’s brand.”

1. If you’re a parent of one of these kids what do you even do for punishment? I’m sure a number of psychologists would weigh in saying that they’d be best served by being educated on what they did wrong in some way or another but even still, in between their sensitivity training sessions I think I’d be inclined to be like, “You’re clearly as dumb as rock so I found you a new job with a landscaping company. Your job responsibilities are as follows: carrying big ass rocks from the truck to whatever pond or retaining wall you’re building. I’ll be donating half your pay to a charity and the other half to myself, so I can drink until I forget you ever did anything this stupid.”

2. It’s typically the olds that aren’t tech-savvy in a technical way, but social tech incompetence truly knows no age.