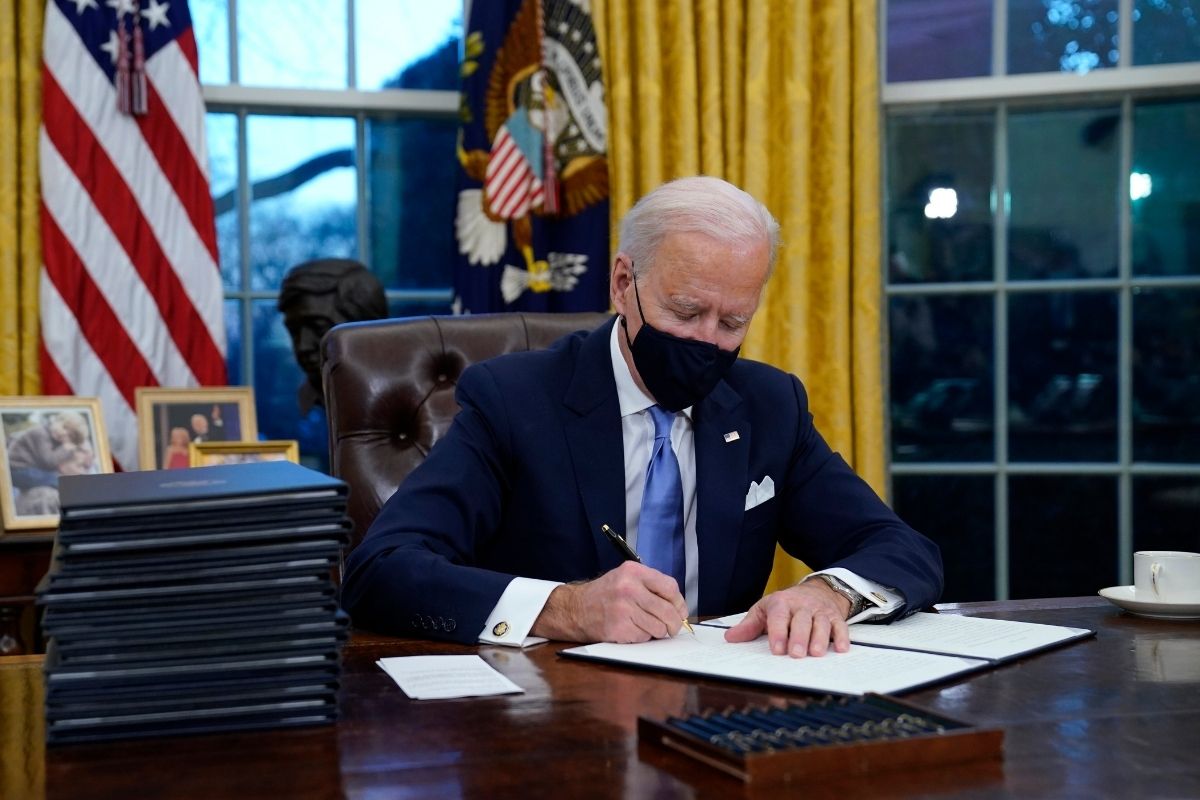 On his first day of office President Joe Biden has signed more than a dozen executive actions at his oval office, some of which reverse decisions that were made by his predecessor former President Donald Trump. Several of the executive actions will make changes in the United States’ response to COVID-19 and try to ease the financial strength of America that resulted from the Coronavirus pandemic. Other executive actions directly targeted and undo Trump’s actions on the environment, immigration, regulatory changes, and the U.S. Census.

After his inauguration at the Capitol alongside Vice President Kamala Harris, Biden signed three executive orders in the presence of reporters, which implemented a mask mandate on the federal property increasing support for the underserved communities and rejoicing the Paris Climate Accord. Biden stated, “ I thought there’s no time to wait. get to work immediately.” Biden said Trump had left a letter for him describing it as “very generous,” but stated he wouldn’t divulge the contents since it was Private

The Biden Administration outlined and described the executive actions on a press call, as Biden promised it would be more to come. According to incoming White House Press Secretary Jen Psaki, “In the coming days and weeks we will be announcing additional executive actions that confront these challenges and deliver on the President-elect’s promises to the American people, including revoking the ban on military service by transgender Americans and reversing the Mexico City policy. ”

Wearing masks isn't a partisan issue — it's a patriotic act that can save countless lives. That's why I signed an executive order today issuing a mask mandate on federal property. It's time to mask up, America.

The president started a 100-day masking challenge calling for a nationwide face mask and social distancing mandate in federal buildings, on federal lands and by contractors and federal employees. The Biden White House has decided to bring back an Obama-era position called the “Directorate for Global Health Security and Biodefense,” Which was organized with an additional staff of the National Security Council after the Ebola epidemic in 2014.

The President also decided to formally implement a response coordinator who will then report to the president on the vaccine, personal protective equipment production, testing, distribution, and Supply. Biden appointed Jeff Zients who is overseeing his COVID-19 team for the presidential transition. The President also rejoined the World Health Organization, in which the Trump Administration was in the process of leaving and is looking to re-establish the United States as an active leader at the WHO.

Biden called on the Centers for Disease Control and Prevention to re-implement and extend the already defunct moratorium until at least March 31st. He also called on the Department of Agriculture Housing and Urban Development and Veterans Affairs to extend the foreclosure moratoriums further federally backed mortgages. Biden also continued to pause on student loan payments and federal student loans until September 30th. His advisors continue to assert that he still supports his campaign pledge to cancel $10,000 off student loans, but this will, unfortunately, take time as it has to go through Congress.

Taking 30 days in effect, he then decided to rejoin the Paris climate change agreement and Keystone XL pipeline and revoke oil and gas development at National Wildlife monuments. I didn’t decide to redo more than 100 harmful presidential proclamations, memoranda, or permits signed by the Trump Administration, which the new Administration views as detrimental to the environment. Biden also reversed the decision by the Trump Administration to allow Land Development at the Bear’s Ears and Grand Staircase-Escalante National Monuments located in Utah and at the northeastern canyons and seamounts Marine National monument in New England. These were set aside for wildlife protection by President Barack Obama in 2016.

One of Biden’s focal points was an action to advance racial equity through the federal government. The president wants every Federal agency to review the equity in their actions and programs. The Office of Management and budget will then analyze if federal money is equitably distributed in communities of color and other places of me, according to the outline of executive action. Biden also signed an order to count non-citizens in the US Census one more time. This reverse is Trump’s order on July 2022 to not count any undocumented America which would affect Federal allocation of federal representation and money.

Biden will “will ensure that the Census Bureau has time to complete an accurate population count for each state” and that “he will then present to Congress an apportionment that is fair and accurate so federal resources are efficiently and fairly distributed for the next decade.” This will also strengthen workplace discrimination and protect those based on sexual orientation and gender identity. This broadens federal protections against sex discrimination to include LGBTQ Americans.

Biden also noted that he will defend the Dreamers program for undocumented young US citizens. He called on Congress to grant permanent status in a path of citizenship to Dreamers, for almost a million undocumented young people who are brought to the country as children and then shielded from deportation by President Barack Obama. The Trump administration tried challenging the law, but the Supreme Court upheld it. The President stated he is also fighting to end the Muslim travel ban, which in 2017 restricted any travel and immigration to the US from Iran, Iraq, Syria, Sudan, Libya, Yemen, and Somalia, befoe adding Nigeria, Kyrgyzstan, Myanmar, Eritrea, and Tanzania in 2020. The state department was also instructed to restart any Visa applications for these countries.

Another action of order Biden signed was to change Trump’s rise priorities from Immigration and Customs Enforcement. This executive order will repeal the changes that Trump made in the first few weeks of his presidency back in 2017 in order to make immigration enforcement much stricter. The Whitehouse team stated that the Department of Homeland Security, which is in partnership with other agencies, will “set civil immigration enforcement policies that best protect the American people and are in line with our values and priorities.” Biden decided to end a National Emergency declaration cited by the Trump Administration in order to divert money to building the Southern Wall. The President also decided to freeze last-minute Trump Administration regulatory actions and formulate executive branch ethics.