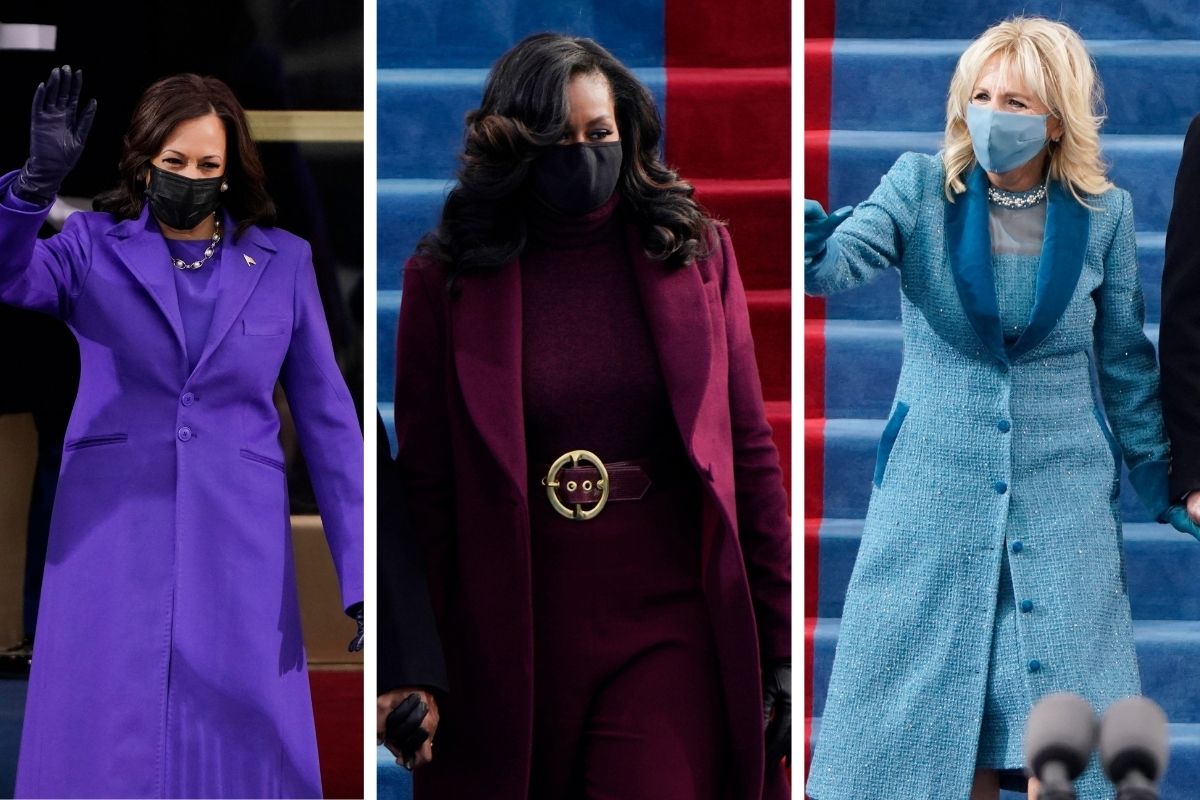 In addition to marking a political watershed, the highly anticipated inauguration of President-elect Joe Biden was also an opportunity for some fave public figures to flaunt fabulous looks. Even with the addition of face masks, these inaugural outfits really popped. So on this special inauguration day,  which comes after such a tough, tragic year,  let’s take a few moments to delight in the powerful style displayed today in Washington, D.C.

There’s not enough words to describe how beautiful Michelle Obama is. pic.twitter.com/dfKjzSN0xk

As the wife of former President Barack Obama, Michelle Obama’s poised and colorful style defined her memorable tenure as America’s First Lady. Obviously, it was no surprise that she looked beautiful today when her friend Joe Biden took the oath of office. American designer Sergio Hudson, based in South Carolina, carefully crafted Michelle‘s garnet turtleneck jumpsuit. Accentuated with a gold belt, Michelle stepped out today exuding pure wine red glamour. (Look at those lashes!) In the chilly forty-degree weather, Michelle’s monochromic set was a solid choice. No pun intended.

As the new First Lady, it goes without saying that Dr. Jill Biden was going to be a star at the presidential inauguration. At her husband’s swearing-in ceremony, she donned a matching teal coat and dress by Markarian with glitzing Swarovski accents. The result was pure aquamarine radiance. Taking over FLOTUS responsibilities from Melania Trump, there’s no doubt that Jill Biden will continue to flex a unique sense of style in the role. Melania’s sky blue ensemble wowed four years ago at the republican inauguration. Jill’s look today was markedly less severe, but her sweet seafoam layers ? not to mention the (adorable) matching gloves ? are just as powerful.

Earlier this week, Vice President-elect Kamala Harris formally stepped down from the senate. She is now officially the veep! Serving alongside the 46th president of the United States, this democratic White House team is already historic. Kamala is the first woman vice president, the first Black vice president, and the first South Asian vice president. It’s no wonder that she chose the rising star Christopher John Rogers (with heels by Sergio Hudson) to fashion her own exceptional inaugural look.

Rogers, a young black designer from Louisiana, masterminded the proud purple jewel tone in which Kamala appeared today. He told NPR: “I don’t think that the way that you dress should make you sacrifice your personality or your point of view.” As the first female vice president, Kamala’s opportunity for sartorial expression within the office is rare and unparalleled. Just as Americans have excitedly watched the evolving styles of First Ladies, we can now look forward to Kamala Harris’ increasingly stunning, professional aura.

Beautiful speech from @amyklobuchar. I am crying pic.twitter.com/8YCRXAIvqe

As chairman of the Senate Rules Committee, Sen. Amy Klobuchar played a large role at the inauguration ceremony. Having made her own play for the presidency last year, America has come to recognize the feisty politician from Minnesota. While she’s certainly not remembered for her fashion sense, even no-nonsense Amy looked quite nice in her sunny yellow coat, offset by a maroon blouse. (A possible shout-out to the University of Minnesota?) Amy’s hair was also particularly voluminous on this winter day. In all, her bright ensemble certainly stuck out from the crowd, as she delivered a powerful speech that critically invoked the national pain of the recent U.S. Capitol riot.

Lady Gaga grabbing a golden mic to sing the national anthem in front of Mike Pence… yeah I’m printing and framing this pic.twitter.com/HvpK4oJlAr

Obviously, Lady Gaga was going to absolutely rock her moment in the spotlight. Coming out to sing the national anthem, everything was larger-than-life on the eccentric pop star. Her skirt: enormous. Her dove brooch: nearly life-size. (“A dove carrying an olive branch. May we all make peace with each other,” Gaga explained on Twitter.) Of course, those more cartoonish elements were toned down by Gaga’s serious navy blazer, clean up-do, and classic red lips. In all, her get-up provided the exact kind of flare this unconventional inauguration ceremony needed. Of course, with an entrance like that, you need a voice to match. And indeed, Gaga’s singing carried mightily through the socially distant crowd. Watching the undeniable icon belt out “The Star-Spangled Banner” defined the hopeful spirit of this significant event.

Watch Jennifer Lopez’s stunning mash up of ‘This Land Is Your Land’ and ‘America the Beautiful’ — with a little ‘Let’s Get Loud’ thrown in for good measure 🎵 pic.twitter.com/YoUYxxf4SO

After her successful, sexy performance at last year’s Super Bowl, Jennifer Lopez‘ appearance at today’s inauguration ceremony was eagerly awaited. But of course, it was a much different performance for J.Lo, who today sang a mash-up of “This Land Is Your Land” and “America the Beautiful.” So much has happened since she and Shakira took the Super Bowl stage last February that this modest showing felt worlds away from the J.Lo we know. But Jennifer Lopez did look positively angelic in her stark white ensemble. Detailed with pearl embellishments, over-the-top frills, and accessorized with chunky pearl earrings, her inaugural outfit, like Lady Gaga’s, bordered on a costume and embraced the singer’s Hollywood roots. The fluffy design was a more conservative look for J.Lo, but the bright white emerged triumphantly.

Amanda Gorman’s poem on unity is one for the history books.

In the wake of the violent riot at the U.S. Capitol, inaugural poet Amanda Gorman’s lyrical address, “The Hill We Climb” felt not only meaningful but incredibly emotional. And as the youngest inaugural poet of all time, this 23-year-old did not shy away from introducing herself to a worldwide audience through unmistakably bold style. This is true of her strong alliterative, assonant verses ? and of her canary yellow outfit. Her double-breasted Prada coat, while practical, reveals a preppy white collar that calls attention to the poet’s youth. Amanda graduated from Harvard University last spring, in the Class of 2020.

Adorning Amanda’s impressive up-do, her thick red headband was at once trendy and totally classic. As if that’s not enough, her gold hoop earrings ? another perfectly understated touch ? were a gift from Oprah. Oprah had gifted parts of Maya Angelou’s wardrobe when she was the inaugural poet and wanted to continue the tradition. What an honorable legacy Amanda Gorman so stylishly joined today as the prodigious inaugural poet.

But We All Know Who the Real Winner Was Today: Bernie Sander’s Giant Mittens.

In all the inauguration fashion news, let us not overlook Senator Bernie Sanders’ mittens pic.twitter.com/BlZivZ8cMP

WATCH: Joe Biden Sworn in as 46th President of The United States