What the Hell Is Going on in This Photo of the Bidens and the Carters? 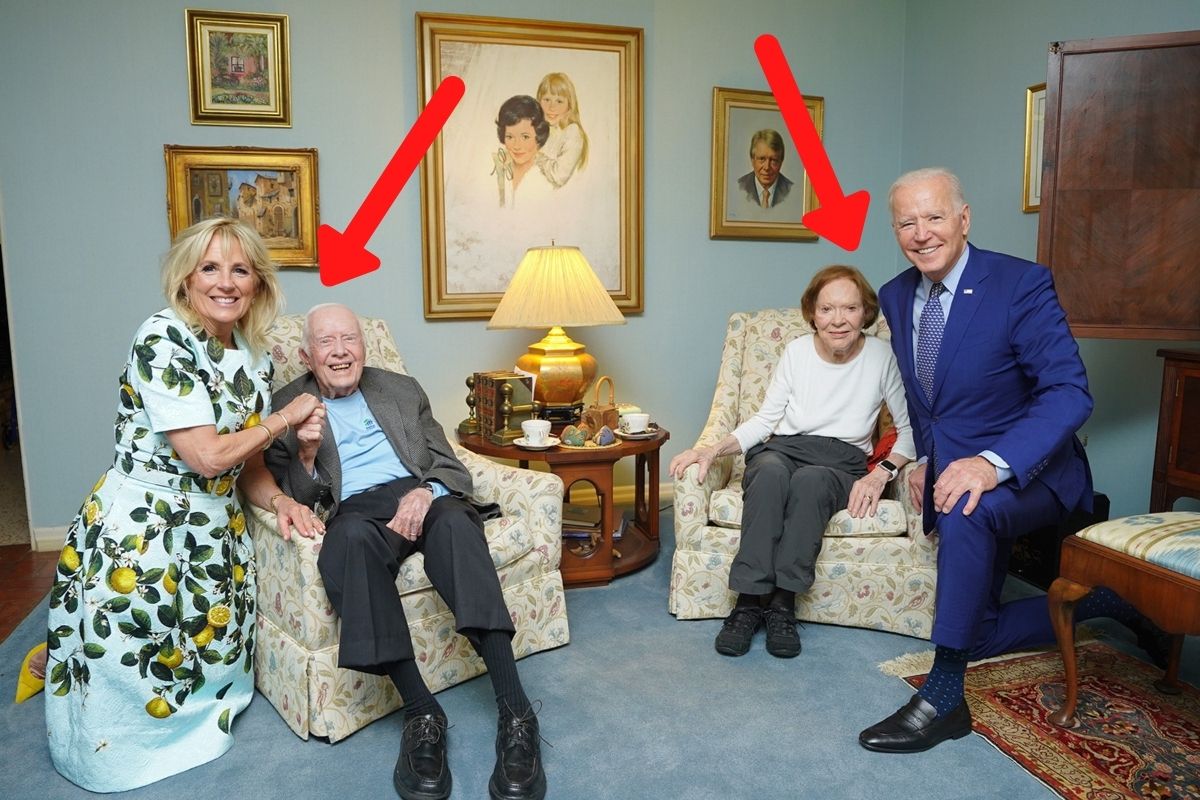 Okay, so we know that people tend to shrink in old age. But there’s still no worldly explanation for this photo, posted on Twitter yesterday by the Carter Center. In it, President Joe Biden and First Lady Jill Biden are towering — literally towering — over former president Jimmy Carter and his wife Rosalynn. Seriously, it looks like the Bidens are inside of a dollhouse crouching over two (semi) realistic toys. Time to investigate the uncanny valley that is this bizarre American photo-op.

We’re pleased to share this wonderful photo from the @POTUS and @FLOTUS visit to see the Carters in Plains, Ga.!

“We’re pleased to share this wonderful photo from the @POTUS and @FLOTUS visit to see the Carters in Plains, Ga.! Thank you President and Mrs. Biden!”

According to Jonathan Alter’s recent biography on Carter, His Very Best: Jimmy Carter, a Life, Biden was the first U.S. senator to extend support for Carter’s presidential campaign back in 1976. Naturally, a friendship developed. And apparently, Joe and Dr. Jill Biden went to those old pals in Carter’s hometown of Plains, Georgia last week.

The visit lasted an hour according to CNN and marked the first time the couples had gotten together since Biden moved into the White House; the Carters did not attend his inauguration due to the Coronavirus pandemic. After all, they’re at high risk for the virus. Jimmy Carter is now 96 years old; Rosalynn is 93.

For that alone, it seems cruel to mock their appearance in any photo. But, this unnaturally disproportionate snapshot portrays the Bidens as hulking giants. First, they are taller than armchairs when kneeling on the floor. And if the chairs were that short then… are the Carters minuscule? Jimmy’s legs, at least, stretch out indicating that he’s slumping (understandably) in the seat. But Rosalynn’s feet just barely extend to the ground — and she’s supposedly just an inch shorter than Jill.

The Washington Post summed up the confusion pretty well with the headline: “Are the Bidens giants? Are the Carters tiny? Or are our eyes failing us?”

Arguably, the wonky appearance is the result of a wide-angle lens. Had the room been small, the photographer would have tried to fit everyone into one shot. But maybe it’s bad photoshop… Did this visit really take place? I’m not convinced.

The politicians’ heights, as listed online, are as follows:

There. I fixed it. pic.twitter.com/dmjLiX3oXk

Obviously, the internet had a field day with this abnormally proportioned imagery. The photo of the visit between the Bidens and Carters was instantly trending on social media, with everyone commenting their own one-liners on the meme-able interaction.

But one Twitter user offered a more technical explanation, writing:

My guess is the room was very small, so they had to use a wide angle lens to get everyone in. The choice of lens was correct, but someone should’ve fixed the distortion in photoshop before releasing it. Something like this, maybe?

My guess is the room was very small, so they had to use a wide angle lens to get everyone in. The choice of lens was correct, but someone should've fixed the distortion in photoshop before releasing it. Something like this, maybe? pic.twitter.com/OQyugQ8H98

But even the edit by @DemSwag_com still leaves the Bidens’ shoulders resting above the top of the armchairs — while their knees are planted firmly on the ground.

As questions surrounding the surreal photo continue to swirl, at least there’s one thing Democrats and Republicans can agree on (for now): this picture makes no damn sense.

WATCH: Bill and Melinda Gates Are Getting Divorced