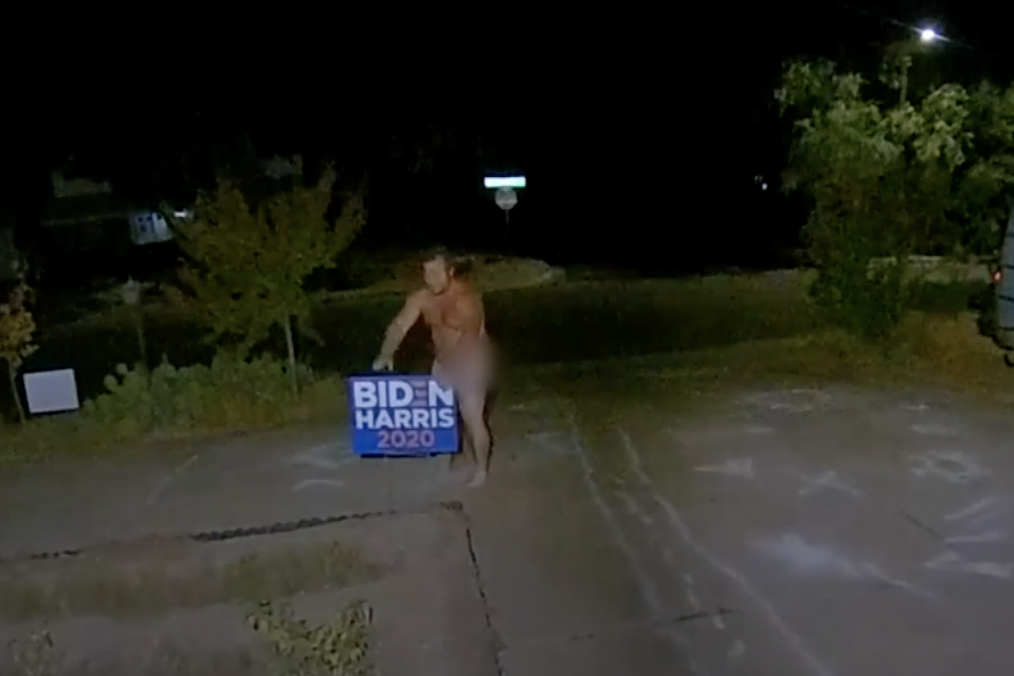 A man with some eyebrow-raising hobbies and habits was spotted on a security camera removing a Joe Biden campaign sign wearing nothing but his disdain for the Democratic nominee.

The video, out of Albuquerque, New Mexico, shows the homeowner’s Biden-Harris sign sitting in the front yard of a home in the middle of the night when, out of the darkness, a supporter of Republican President Donald Trump (at least presumably), saunters up to it completely naked and starts to yank… at the sign. The sort of yanking that only ends up being a misdemeanor, fortunately.

After a couple of tries the man is able to pull the sign out of the ground. He then wanders back off into the darkness to do God knows what with the sign.

Is There More to This Biden Yard Sign’s Story?

It’s actually presumptuous to assume this political sign was stolen by a Trump supporter. What if this is a Democrat and Biden supporter who wanted to promote who he wants to win the 2020 presidential election while high on PCP? A Trump campaign supporter who was tweaking out would want to show off with a Trump sign, wouldn’t they? Rep their presidential candidate. All I can say for sure is that whether this guy is a member of the Democratic party or the Republican party, in New Mexico, tweakers walk between the aisles.

Or maybe this guy just has a super weird appreciation for Kamala Harris. It’s tough to get inside the mind of a man on his 68th hour of a cleaning supply and cold medicine induced blackout.

Is this suppression of free speech? Or is this perhaps nothing more than an extremely New Mexico version of Freedom of Speech? Regardless, the naked vandalism cost Former Vice President Joe Biden one extra sign in New Mexico, and as the completely airtight and flawless theory goes, if you can’t see Joe Biden signs everywhere, is anyone actually voting for Joe Biden?