MSNBC’s “Morning Joe” host Joe Scarborough started off his new year by getting in another Twitter beef.

Scarborough, who himself has a very rocky relationship with Trump, responded to Deb’s claim:

Partied? You're very good at pushing fake news. You should write for CNN. Apparently making up facts is fine if you're writing about us. https://t.co/mCe0EYghRB

RELATED: Joe Scarborough and Kellyanne Conway had a Twitter fight, and this is how it ended

The Twitter beef hit its second day on Monday:

Oh, you're back. What's your lie of the day? https://t.co/HAh9BBVwpP

Despite the correction, Deb tweeted a picture of Trump and Scarborough talking, without context, saying that the party looked like a good location for an interview between the two:

You get caught lying then double down and triple down. You know the truth and yet you just can't stop sending out snide tweets. Wow. https://t.co/HAh9BBDVyh

“You get caught lying then double down and triple down. You know the truth and yet you just can’t stop sending out snide tweets. Wow,” he retorted. Both Deb and Scarborough were quite defensive throughout the exchange.

While this was happening, Scarborough was also responding to New York Times presidential campaign correspondent Maggie Haberman, who insisted that the picture confirmed the story’s details. All the while, Scarborough continued to tell Haberman that the New York Times should have called to confirm the details of the picture, especially as he was not invited to the party, did not attend and was not dressed for the occasion. In fact, Scarborough and Brzezinski arrived to the resort in casual clothes in an attempt to set up an interview with Trump:

More: Maggie Haberman did not try to contact me before putting me in a story saying I was a "reveler" at Trump's NYE party. I was not. https://t.co/8AxPlkjZpH

Yes Michael. As stated yesterday, security took us to Trump, he introduced us to a 10 yr old boy, and we walked upstairs a minute later. https://t.co/gAF5l20XkT

It really stinks to watch others continue help ruin the reputation of your industry. But fighting each other about only hurts the democracy

“It really stinks to watch others continue help ruin the reputation of your industry. But fighting each other about only hurts the democracy,” he warned.

Yes. I find that people misrepresenting others and lying is indeed corrosive. I know you agree with me that facts matter. https://t.co/qnvDt6xwg6

“Yes. I find that people misrepresenting others and lying is indeed corrosive. I know you agree with me that facts matter,” Scarborough replied.

RELATED: A website is threatening to sue the Washington Post over being labeled “fake news” by the paper

For those trying to keep up with the fiasco, the situation appears to be that Scarborough and Brzezinski met Trump before the party in casual clothes to try to set up an interview. The pair left before the festivities began and Deb incorrectly classified their presence without calling either to confirm their presence. Rather than update the article, Deb and other stuck with the original story because of a picture without context.

"Deb reported something that wasn’t true because it fit his own preconceived notions. That is 'fake news'" https://t.co/Iaa6O7pU2k 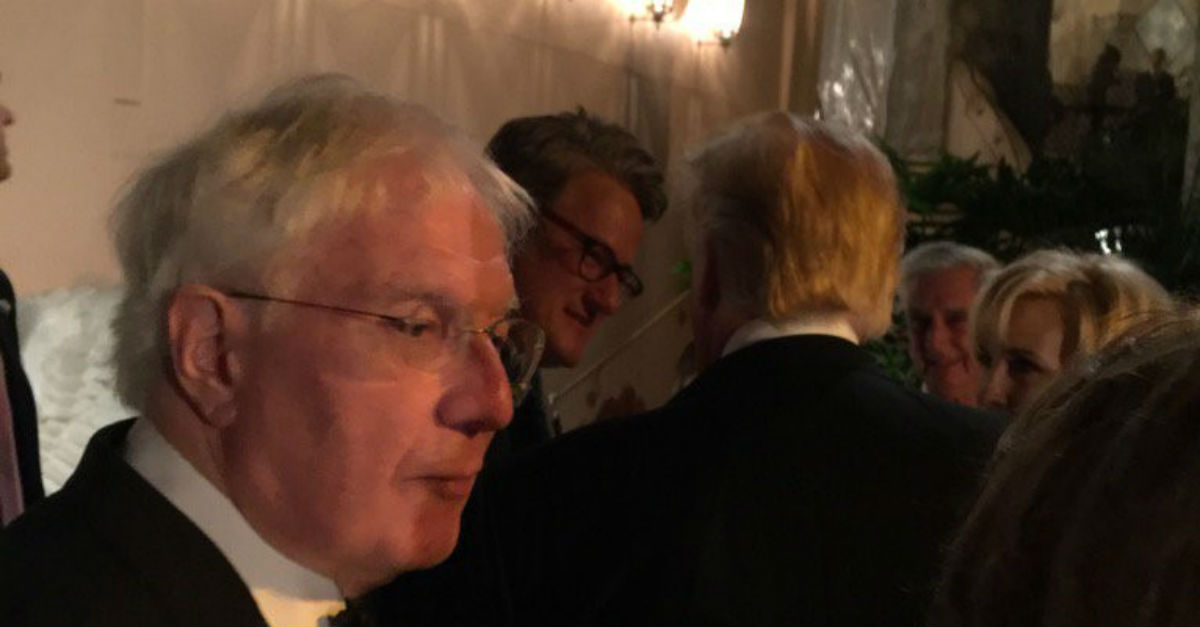