Joey Chestnut scarfed down 63 hot dogs in a matter of minutes to claim the Nathan’s Fourth of July Hot Dog Eating Contest, his 15th title in all, but may be remembered for something else.

During his, uh, superhuman eating display, a protestor rushed the stage, while donning a Darth Vader mask and carrying a sign. Chestnut decided to handle this wiener as well — clutching the protestor in a choke hold and then throwing him to the ground.

Security handled it from there, and Chestnut did what he does better than anyone else. He just went right back to stuffing his face.

According to TMZ, the New York Police Department placed three people in custody as a result of the incident. We can assume the Darth Vader was one.

As for Chestnut, well, it was just business as usual. He emerged with a belly full of buns, and the hot dogs inside of them, and is now going through the recovery process.

Despite winning the title, again, Chestnut’s 63 hot dogs were 13 less than he managed to woof down last time. But hey, when you have to break to take down Luke Skywalker’s supposed dad, 13 less isn’t so bad. 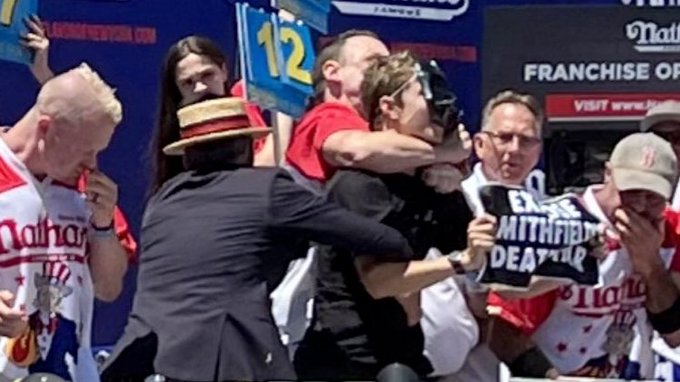