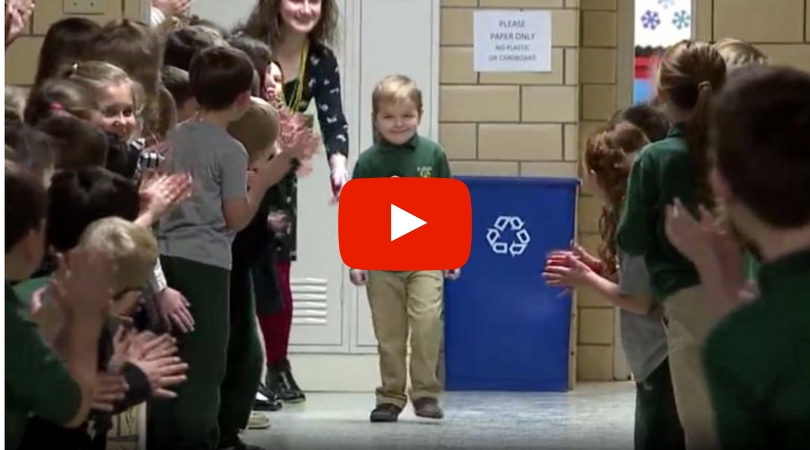 Oh, be still my fragile little heart. A 6-year-old boy who has been battling cancer got the surprises of his lifetime, receiving a standing ovation from his classmates when he returned to school after finishing his last round of chemotherapy. Yes, just look at his face, it says it all. I’m not crying, you are!

According to John Oliver Zippay’s father, John Zippay, the boy has been in and out of school for three years since he was diagnosed back in 2016 with acute lymphoblastic leukemia at the age of 3. On December 27, John Oliver received his last round of chemotherapy. So, to celebrate his return to school in Newbury, Ohio, his classmates welcomed him back with smiles, high fives, applause, and cheers.

After a 3-year fight against leukemia, 6yr old John Oliver Zippay finally received his last chemotherapy after Christmas.
After John’s classmates, teachers, and family had a long and difficult journey, celebrated and greeted him with a standing ovation at his school. #BeatCancer pic.twitter.com/qHUw3Rru3M

Back in Halloween of 2016, John Oliver’s parents, John and Megan, rushed the boy to the hospital in the middle of the night after he hit his head on the headboard of his bed. His face was discolored and he was lethargic. After several blood tests, he was quickly taken to the emergency room where doctors believed he had leukemia. The couple, along with their older daughter, spent a total of 18 days in the hospital with John Oliver while he had blood transfusions, bone marrow biopsies, and several tests done.

After doctors gave their diagnosis, the next three years consisted of different types of procedures and chemo. Unfortunately, the side effects were too strong for the boy, which made it difficult for him to do normal things children that age do, and wasn’t able to attend school on a consistent basis.

Luckily, St. Helen Catholic School Principal Patrick Gannon made sure the six-year-old did not get behind academically. The family made it a point to document the good and bad days through a Facebook group for the boy’s support system to follow along. They hope their journey can help others who are suffering from a similar situation.

On John Oliver’s last day of chemotherapy, several nurses, hospital staff, family, and friends gathered around so he could ring the bell patients ring when they finished their last treatment. The father stated, “And that’s when I told him, ‘okay buddy, you gotta ring the bell. Ring it for all the kids who didn’t have the chance to ring it’ and it’s like everything went into slow motion for me. He rang it so hard, he was so proud.”

Wishing you a life full of love, health, and adventures, John Oliver!