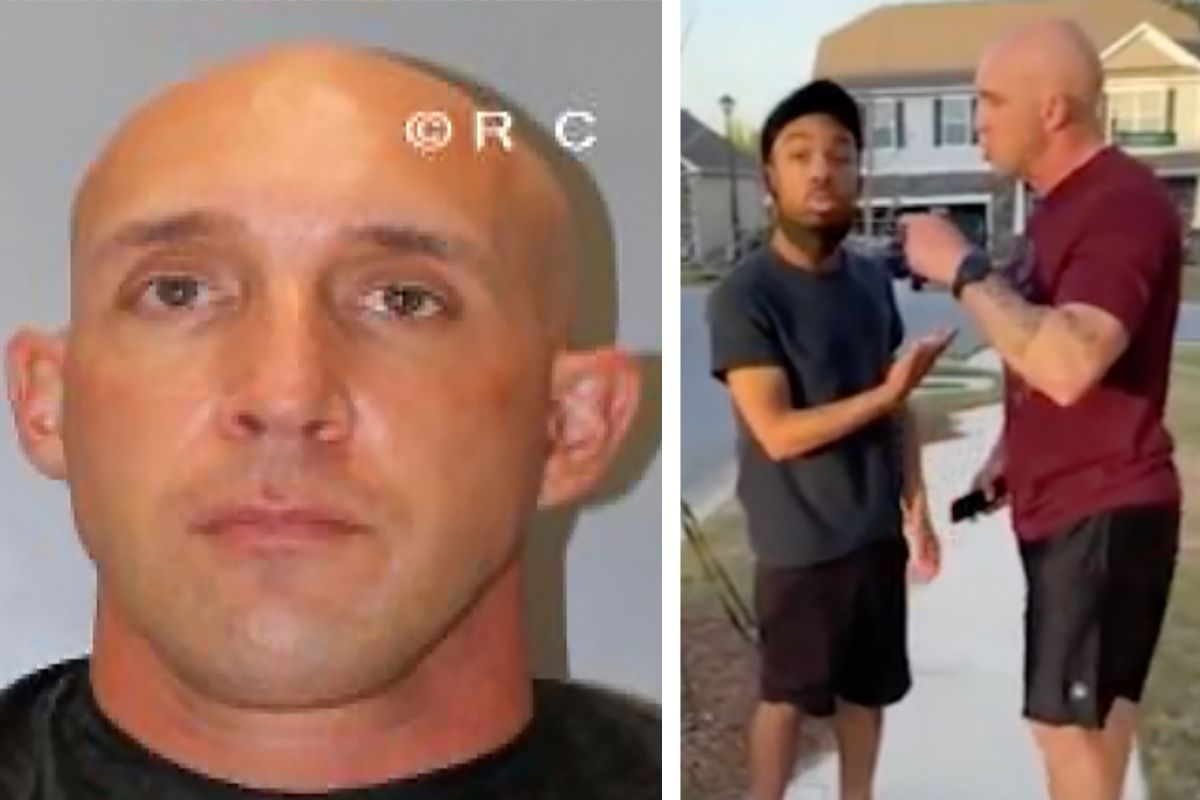 COLUMBIA, S.C. (AP) — A white Army non-commissioned officer depicted in a viral video accosting and shoving a Black man in a South Carolina neighborhood has been charged with third-degree assault.

Jonathan Pentland, 42, was charged Wednesday and listed as detained in the Richland County jail and issued a personal recognizance bond, according to online jail records, which did not show him as having an attorney.

The video, posted Monday by a woman on Facebook and shared thousands of times, shows a man, identified as Pentland, demanding that a Black man leave the neighborhood before threatening him with physical violence.

“You’re in the wrong neighborhood,” Pentland, standing on the sidewalk, can be heard saying to the other man before using an expletive. “I ain’t playing with you. … I’m about to show you what I can do.”

According to Shirell Johnson, who posted the video, the incident happened in a subdivision of The Summit, which has a Columbia address but is technically outside the city’s limits. The video does not show what started the conflict. Johnson did not immediately respond to a message from The Associated Press seeking further details.

The recording begins with Pentland, a U.S. Army sergeant first class, asking the Black man what he’s doing in the area. The Black man says he was simply walking and not bothering anyone.

Throughout the three-minute video, Pentland continuously demands that the other man leave the neighborhood, getting in his face and, at one point, pushing the man, who almost falls to the ground.

“Let’s go, walk away,” he said. “I’m about to do something to you. You better start walking right now.”

At the end of the video, a woman who Pentland identifies as his wife can be heard telling the other man that he had picked a fight with “some random young lady” in the neighborhood, a claim the Black man then denies.

Johnson said authorities arrived at the scene and only gave Pentland a citation for malicious injury to property for slapping the man’s phone out of his hand and cracking it.

Officials at Fort Jackson, the U.S. Army’s largest basic training facility, said Wednesday they were looking into the incident. On one of its Twitter accounts, base officials also said that U.S. Department of Justice authorities were investigating as well.

According to social media accounts connected to Pentland, he has been stationed at Fort Jackson since 2019 and has worked as a drill sergeant at the garrison, a 53,000-acre complex that trains 50% of all soldiers and 60% of women who enter the Army each year.

Asked on Twitter for his response to the video, Fort Jackson Commanding Brig. Gen. Milford H. Beagle Jr. said the behavior displayed in the video “is by no means condoned by any service member.”

“We will get to the bottom of this ASAP,” he said.

On his official Facebook page, Beagle said Army officials “have begun our own investigation and are working with the local authorities.”

Fort Jackson officials are aware of the video taken in the Summit and it has our full attention. This type of behavior…

Earlier this year, the Department of Defense announced that Beagle would take over as commanding general at Fort Drum, New York, to be succeeded at Fort Jackson by Brig. Gen. Patrick R. Michaelis. An official transfer date has not been announced.

Commenters on the video said they had reached out to the Richland County Sheriff’s Department asking for additional charges to be filed. In a release issued early Wednesday, a department spokeswoman said deputies had been dispatched to the neighborhood for “an assault” call involving one of the men several days before the date of the video, and that all of the matters were under investigation.

During an afternoon news conference, Sheriff Leon Lott said the other man in the video was not a juvenile but declined to release his name. Lott said that man had been involved in other incidents in the neighborhood in the days leading up to the video but said that “none of them justified the assault that occurred.”

“The first time I saw the video, it was terrible. It was unnecessary,” Lott said, noting he had met with community leaders and elected officials before speaking with reporters. Lott said his investigators had turned their case over to prosecutors, who determined what charge to levy against Pentland.

“The leaders at Fort Jackson in no way condone the behavior depicted in the video posted recently,” said Fort Jackson…

Pentland did not immediately respond to an email message seeking comment. If convicted, he faces up to 30 days in jail and a $500 fine.

State Sen. Mia McLeod, who represents the area, said Wednesday on the Senate floor that she had spent much of the previous day in discussions about the incident and planned to meet with the sheriff later in the day.

“My sons have a freaking right to live,” said McLeod, who is Black. “Another unarmed Black man could be dead today because he was walking in a neighborhood that, I am told, is adjacent to his, doing absolutely nothing.”

Watch: Sob-Worthy Video of Soldier Surprising Dad at Work Will Make You Grab the Tissues