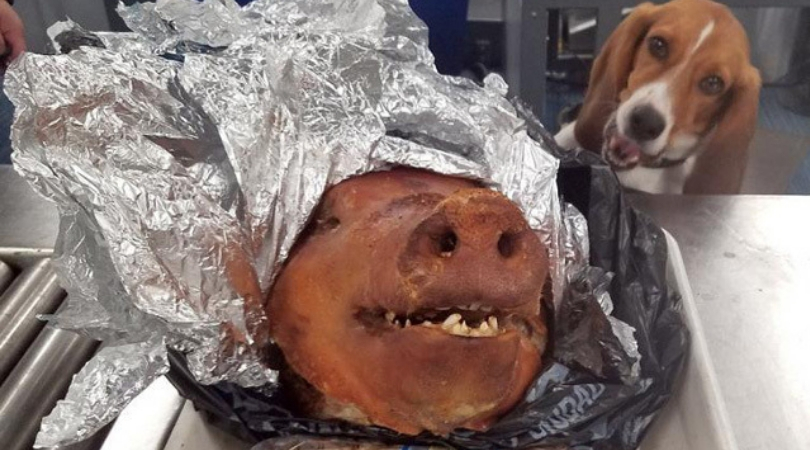 A very good boy deserves a handful of treats after he discovered more than illegal substances at the Hartsfield-Jackson Atlanta International Airport. According to authorities, a beagle from the U.S. Customs and Border Protections’ K-9 Unit known as Hardy, alerted them to something suspicious inside the luggage of a passenger traveling from Ecuador to Atlanta.  Officers confiscated the luggage and opened the bag, finding a full roasted pig head inside. Safe to say it was one of the most unusual finds at any airport.

As if there needs to be any explanation as to why this wasn’t allowed in the airport, CBP stated the United States does not allow pork products from other continents to enter the country to protect from “potential introduction of foreign animal diseases such as Foot and Mouth Disease, Classical Swine Fever, and Swine Vesicular Disease.” Agents immediately seized the nearly 2-pound pig and destroyed it.

The seizure in Atlanta illustrated the tremendous expertise of their four-legged K-9 partners in protecting the U.S.. Hardy is a rescue beagle who joined the CBP after training at the U.S. Department of Agriculture’s National Detectors Dog Training Center in Georgia. Since 2015, the 6-year-old has worked at Atlanta’s airport, which customs agents say is the world’s busiest.

All travelers are supposed to declare vegetables, fruits, and food products to Customs and present them for inspection, regardless of what airport they are at. Surprisingly enough, this ain’t the first time a K9 beagle detects a whole pig. In 2016, another pupper named Joey found a whole roasted pig in the baggage of a traveler from Peru.

Customs at Hartsfield-Jackson International Airport encountered the pig during the Thanksgiving travel period, and immediately seized and destroyed the pig as well. Officers also found fruit trees, cured sausages, horse meat, and carrots. Honestly, I am pretty shocked that people think it’s actually okay (and safe) to travel with a whole roasted animal in their luggage. I’d be scared to eat that thing, let alone travel with it by my side. Gross.

Watch: Why Hank the Mini Pig Is Our New Best Friend