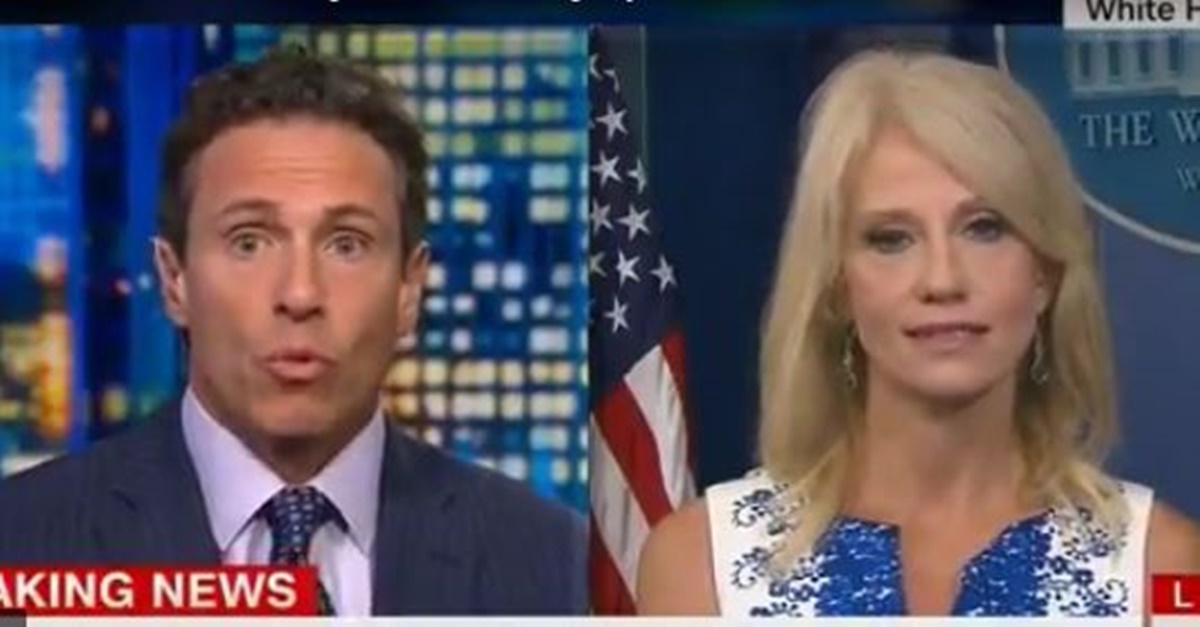 CNN host Chris Cuomo and counselor to the president Kellyanne Conway got into an intense argument over the investigation into the Trump campaign’s ties to Russia during a live television broadcast Thursday night.

During the interview, Cuomo brought special counsel Robert Mueller’s investigation into the Trump family’s ties to Russia, including a meeting that took place in June 2016 between a Kremlin-linked lawyer, President Trump’s son, Donald Trump Jr., and the president’s son-in-law, Jared Kushner.

Conway pushed back against his questions by saying that only six percent of Americans care about the Russia allegations, but that it has consumed “75 percent of the coverage.”

Cuomo said that CNN tried to “cover everything that matters,” and that this was a matter of “national security.”

Conway replied in a dubious tone, “How is that, though?” referring to his national security statement.

The two went on to spar back and forth about the Russia investigation.

When the meeting between Trump Jr. and the Russian lawyer came up, Conway automatically became defensive, asking why Cuomo was applying “nefarious motives to her colleagues.” She then pivoted to attacking Hillary Clinton, saying that she was a “walking treasure box of negative information” and attacking the way the former Democratic presidential candidate ran her campaign.

Cuomo replied that how Hillary Clinton handled her campaign was “irrelevant.”

“But regardless of who won the election, and how Hillary Clinton handled herself and handled her campaign, it’s all irrelevant to the questions of Russian interference,” he said.

“Of course they are,” Cuomo replied.

Conway also accused Cuomo of wanting to “re-litigate something from last week,” as she put it.

The CNN host pushed back against her statement, saying, “Not true. Not true, it’s not an either or.”

Watch the full interview above.