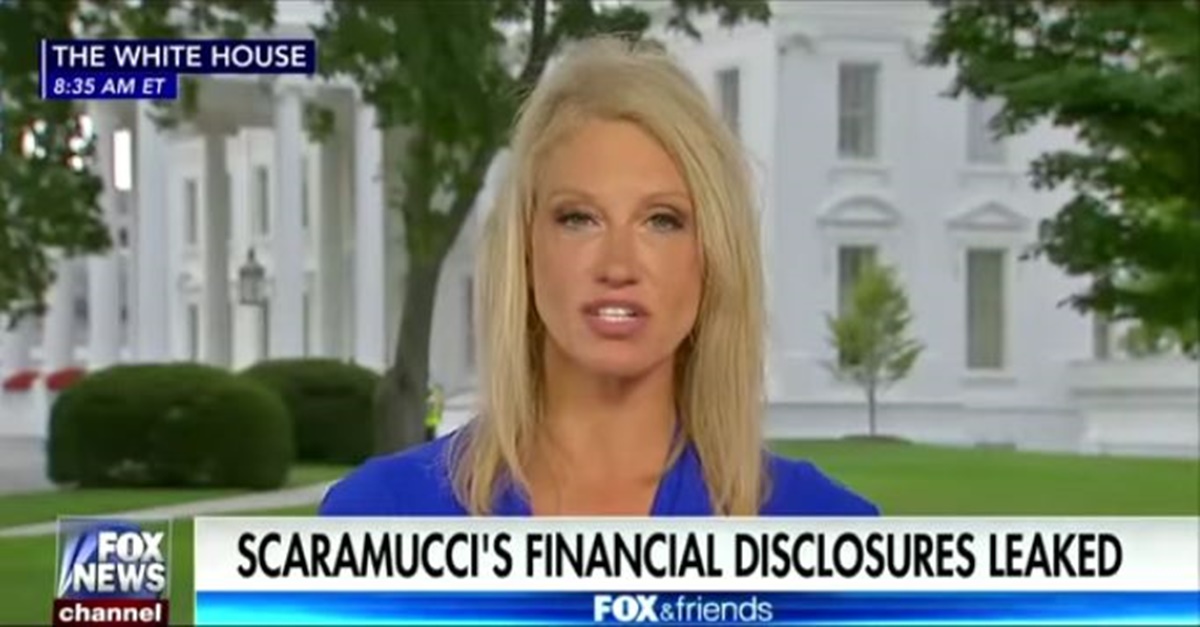 During an appearance on Fox News’ “Fox & Friends” Thursday, Conway commented on government transparency requirements while she attempted to defend communications director Anthony Scaramucci after he claimed that his financial disclosure had been leaked” to Politico.

“There are so many qualified men and women who wanted to serve this president, this administration and their country who have been completely demoralized and completely, I think, disinclined to do so, based on the paperwork that we have to put forward, divesting assets, the different hoops you have to run through,” Conway said.

She added: “This White House is transparent and accountable, and we’ve all complied with those rules, but it has disincentivized good men and women. I hope it doesn’t disincentivize Anthony.”

She also accused reporters of covering the “style and not the substance here.”

Conway’s defense comes after Scaramucci lashed out via Twitter in response to a recent Politico story about his finances, saying that his financial disclosure had been leaked in a now deleted tweet in which he also tagged the Federal Bureau of Investigation and the Department of Justice.

Politico reporters, however, noted in the article that the disclosure was publicly available by request from the Office of Government Ethics.

Conway addressed the public nature of the disclosure in her interview but kept focusing on leaks from the White House and made it clear that they still thought his financial disclosure was released for malicious reasons.

“He’s making clear that even though the documents are eventually procurable publicly, that somebody doesn’t want him here, and somebody is trying to get in his way and scare him off from working here, which is a huge mistake.”