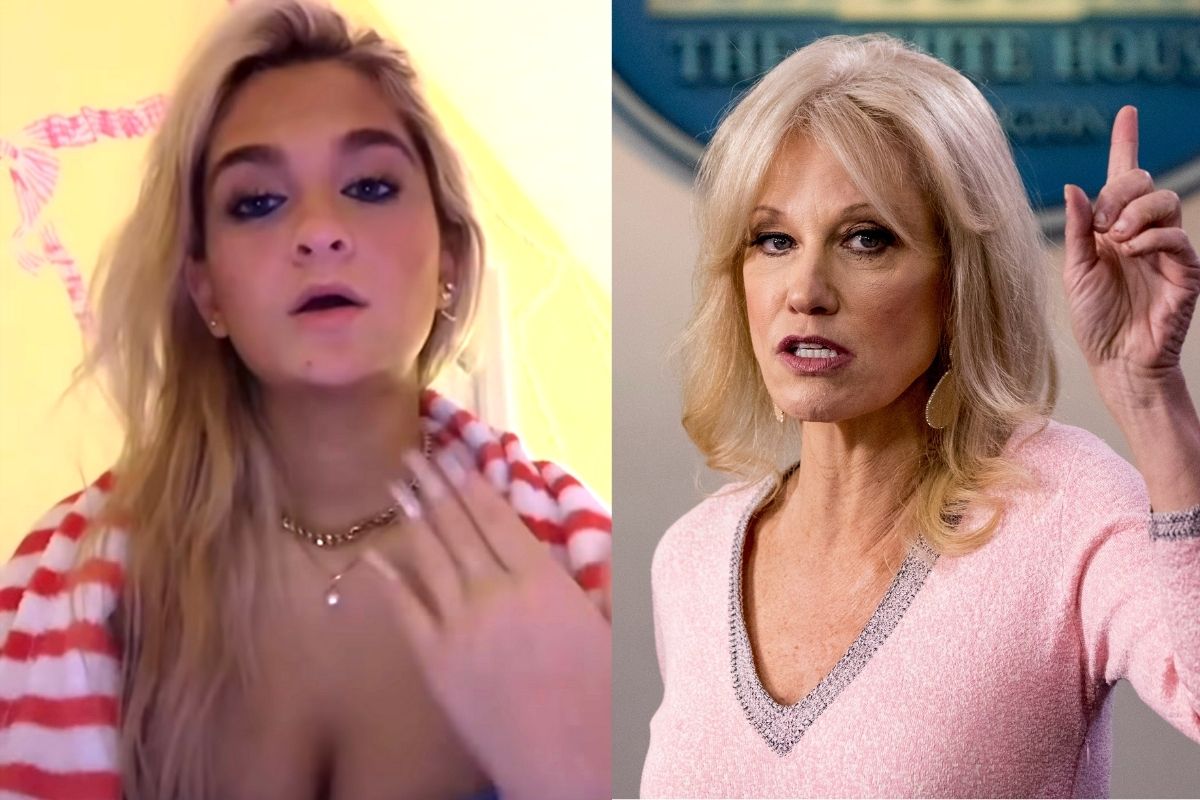 Kellyanne Conway’s 16-year-old daughter Claudia Conway has made news since last year when her TikTok videos mocking her political parentage went totally viral. Throughout the Coronavirus pandemic, Claudia Conway has used the developing social media platform to make a name for herself — and call attention to her mother’s spin doctor role in the floundering Trump administration.

The mother-daughter feud is an ongoing salacious story, but a recent topless photo of the teenager circulating online draws new critical attention to the matter. Who is the culprit behind the harmful post? Many signs are pointing to Kellyanne Conway herself.

Kellyanne Conway is married to George T. Conway III, a prominent Republican lawyer who wrote the brief for the Clinton impeachment in 1998. They share four children, sixteen-year-old twins Claudia and George IV, and daughters Charlotte and Vanessa. Although George Conway is a noted Republican, over the last four years, he’s gained national attention for his sharp criticism of Donald Trump. In 2019, he co-founded the Lincoln Project, a conservative coalition that campaigned against Trump’s re-election. As his wife became the most famed mouthpiece of the Trump administration, espousing her self-ascribed “alternative facts,” their tense marriage remains something of a national fascination.

The matters between George and Kellyanne Conway were complicated in 2020 when their then-15-year-old daughter Claudia became a TikTok influencer, most known for posting anti-Trump videos. Claudia’s TikToks are rebellious, colorful, and hyper-critical. In personal clips, she harshly lambasts pro-Trumpers — especially her mom — with a natural combination of eye-rolling teen insults and leftist ideological language. Regardless of political orientation, it’s obvious that Claudia inherited her mother’s talkative tendency for the spotlight.

In August 2020, Claudia Conway announced that she was seeking emancipation from her parents. The same month, Kellyanne Conway left her post at the White House citing family concerns. This week, Claudia claimed that her mother had been physically and verbally abusive toward her and posted a TikTok in which Kellyanne was screaming — and possibly hitting — her daughter. The video has since been deleted but screenshots and a detailed description are available here.

The New Allegations Against Kellyanne Conway

Late on Monday night, January 25, 2021, Kellyanne Conway’s Twitter account, @KellyannePolls, reportedly shared a Fleet (a type of post now available on Twitter mobile which disappears after 24 hours, similar to an Instagram or Snapchat story) that showed her daughter Claudia Conway at least partially nude. The pic was quickly deleted but many screenshots by Twitter users were already taken. By Tuesday morning, the sickening story was completely viral. How could any mother publicly post a topless photo of her 16-year-old daughter?

Posting topless photos of anyone without their consent is illegal, but to share a nude photo of an underage girl would violate serious federal child pornography laws. Investigators are now looking into the matter, but Kellyanne Conway appears as the prime suspect, since the topless selfie appeared directly from her own account. The former White House counselor has not yet responded to these allegations. With Kellyanne Conway accused, this Twitter debacle becomes the latest in a long string of ethics violations. In 2019, she was called out by the Office of Special Counsel as a “repeat offender” of the Hatch Act.

In response to all the drama, Claudia Conway, in typical Claudia fashion, took part in a messy TikTok Live with fellow social media influencer Tana Mongeau. During the long video, Claudia is heard arguing with her parents over the photo. Claudia certainly keeps her followers in the loop. She also commented on her own videos in Morse code, desperately spreading awareness of this apparently abusive household. Police are currently investigating the matter.