Toddler Missing for 3 Days Found Alive in the Woods, on 50 Foot Cliffside 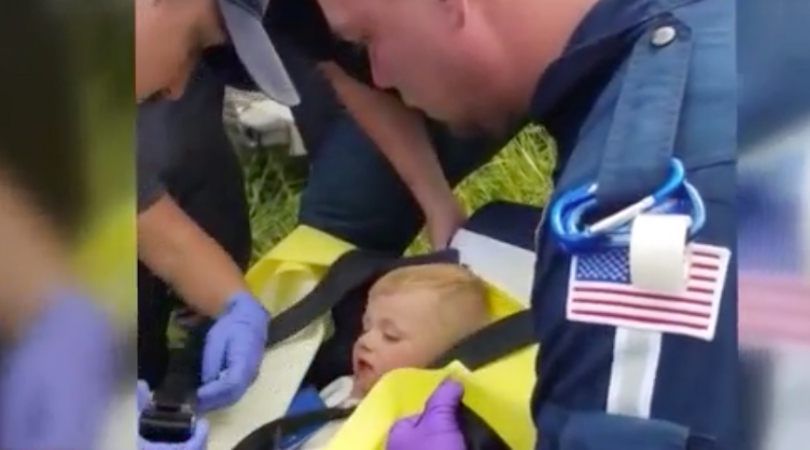 Via Today
Via Today

You know how sometimes they say that miracles exist? Well, this is living proof of that. A massive search for a missing 1-year-old thankfully ended with tears of joy from the community of Kentucky, when he was remarkably found safe after missing for three days.

Rescuers said they found 22-month-old Kenneth Howard was sitting on a 50-foot rock ledge almost 2,000 feet away from his home. The boy apparently kept repeating to his rescuer, “Here all night.” Howard spent more than 60 hours alone, after wandering off from his family’s home on Mother’s Day. Kentucky State Police are investigating the circumstances surrounding the boy’s disappearance, but family members believe he might have simply walked out the back door of the house in search of his father, Elden Howard, who was in the front yard.

RT **UPDATE **
Missing Child – FOUND!
Just before 2PM today the child was found alive in the area of a strip mine in Floyd County which is on the boarder of Magoffin Co. The child has been transported by EMS to a medical facility, for examination and treatment if needed. pic.twitter.com/hnEy4qxsRd

Over 300 volunteers scoured the area by foot and horseback near an old strip mine one mile from the family’s home. State police also use K-9 dogs, ATV?s, helicopters and drones with thermal cameras to search the rugged terrain. The toddler was found by a rescuer who heard a faint cry, running to toddler.

Miraculously, the boy was in good condition and only suffered from dehydration. He was quickly airlifted to Cabell Huntington Hospital in Huntington, West Virginia to be further evaluated.

Great work by the Prestonsburg Fire Department! Chief Michael Brown tells us the story of how his team miraculously rescued a 22-month-old child lost in the woods for days. https://t.co/7mmVF3dSnN pic.twitter.com/dgAq69oYRq

The boy?s father, who had initially offered a $5,000 reward for the toddlers safe return, had feared Kenneth had been abducted. Both parents were very emotional when they heard the news that their son had been found.

When asked how he felt, the father stated, “Disbelief, for a while. Til they told me they were sure it was him and stuff, and I’d seen a picture. I said, `That’s my boy.’ Tickled me to death. Best thing that ever happened to me in my life.”