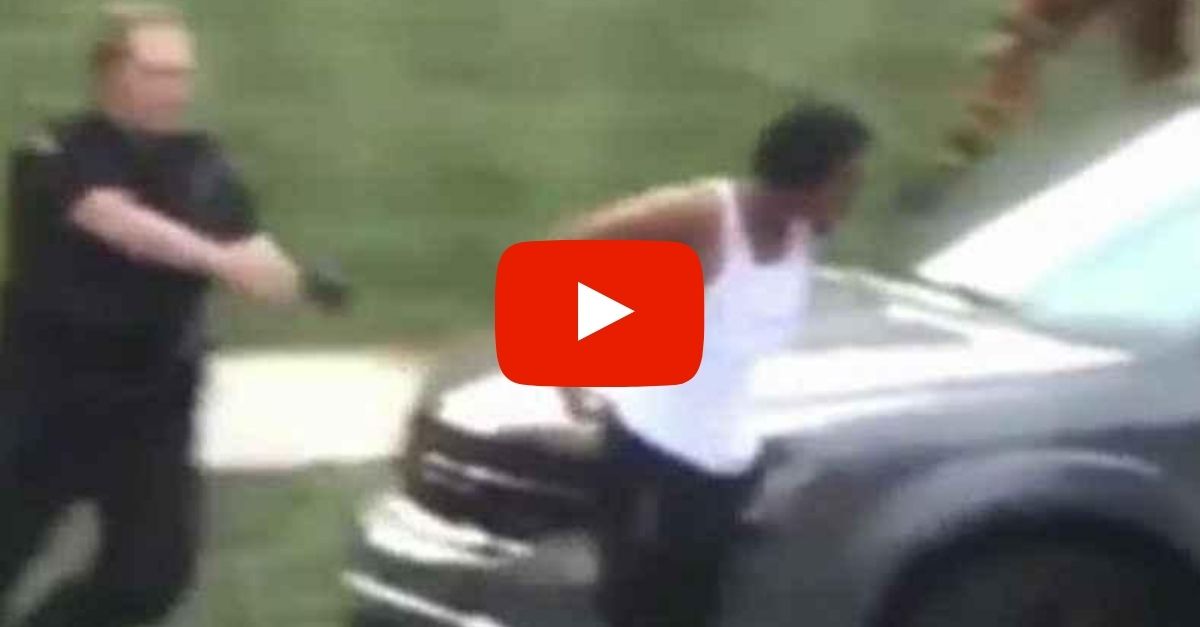 Via KSTP
Via KSTP

The father of Jacob lake has announced that his son was left paralyzed from the waist down after he was shot by Kenosha police officers on Sunday. Blake’s father told Chicago Sun-Times, that his son was shot eight times during the Sunday evening confrontation with police. The incident was all captured on video and led to two nights of protest along Lake Michigan between Milwaukee and Chicago.

The father, who is also named Jacob Blake, said his son was driving from Charlotte North Carolina to Kenosha to be with his son. He noted that his son has “eight holes” in his body and that doctors don’t know if the paralysis will be permanent or not. Several protests in honor of Blake occurred across the country Monday night, including in San Diego, New York, Denver, Portland, and Minneapolis.

Jacob Blake, a 29-year-old Black man, who was shot multiple times
in the back by police in Wisconsin, US left paralyzed from the waist down and has “eight holes” in his body, Blake’s father says pic.twitter.com/I6PpEUpc1d

Police quickly declared a riot in Portland after several fires were set outside of the offices of the Police Association. In San Diego, authorities say that there have been at least three protesters arrested. After the protest, police were forced to fire tear gas at hundreds of protesters who did not follow the emergency curfew, threw bottles, and shot fireworks at law enforcement guarding the courthouse. Wisconsin Democratic Governor Tony Evers activated 125 members of a National Guard to assist police officers. Police fired tear gas 30 minutes after the 8 p.m. curfew, but many protesters remained outside.

Blake was shot by police officers who responded to the area near 40th and 28th for a reported “domestic incident.” Officers have not stated what led up to the shooting, but a video shot by a neighbor shows Blake walking to an SUV attempting to enter, moments before an officer grabbed him by the shirt and shot him. The Wisconsin Department of Justice Division of Criminal Investigation is now investigating the incident.

If you would like to help Blake and his family, you can donate to his GoFund Me here, the family has raised more than $1,023,940 in less than 24 hours.

LeBron James on the police shooting of Jacob Blake: "You have no idea how that cop that day left the house… maybe he just left the house saying that, 'Today is going to be the end for one of these Black people.' That's what it feels like." https://t.co/sGypf5JefK pic.twitter.com/jXvUeJmHN1

A Kenosha police shooting that left a man injured on Sunday afternoon was captured on video, which led to several widespread protests overnight. The video shows a man, who is African-American, being shot multiple times as he tries to get inside a vehicle. The man was later identified as Jacob Blake by the Wisconsin Governor Tony Evers. Blake is in serious condition according to Attorney Benjamin Crump, who is now representing Blake’s family.

The shooting occurred in broad daylight on the 2800 block of 40th Street when several police officers responded to a domestic incident, according to the Kenosha Police Department. The video was posted on social media which appears to show the shooting from across the street, showing three officers pointing and shouting at Blake as he walks around the front of a parked SUV. As the man opened the driver’s side door and leaned inside the vehicle, the officer forcibly grabbed onto his shirt from behind and fired into the vehicle.

A total of 7 shots were heard on the video, but it is unclear if more than one officer fired. Blake’s fiance, Laquisha Book stated Blake was unarmed at the time of the incident, stating, “That doesn’t make any sense to treat somebody like that, who is not armed, with the kids in the back screaming.” Blake’s family Civil Rights Attorney stated his three sons, 3, 5, and 8, were inside the vehicle at the time of the incident. Several neighbors confronted law enforcement officers at the scene as the crowd started marching in the streets. They headed towards the Kenosha County Public Safety Building, which was already mostly blocked off.

Several protesters faced off with officers in surrounding streets who were wearing protective gear which included a plastic face mask. Officers had plastic shields and batons that were used to push people back. While several people protested peacefully, others reportedly chose to go violent. People began using pepper spray in the confrontation as several garbage trucks were set on fire. Protesters also spray-painted on the wall of the Charles County Courthouse. A fire started on the ground floor of the courthouse, but it was quickly under control.

By Friday night, several social media posts showed people setting dump trucks on fire, had broken windows, smashed several cars, threw bleach bombs as crowds faced off with law enforcement, and caused damage police vehicles. Officers in riot gear stood in lines as SWAT vehicles remained on the streets to move people away from City buildings, despite there being a declaration of an overnight curfew. Tear gas was also used on groups of people, according to several reporters at the scene.

It is still unclear if they have made any arrests as of right now, and there have been no reported injuries to any officer. The Wisconsin Department of Justice is currently investigating the shooting, and the officers involved have been placed on administrative leave. Governor Evers spoke about the shooting through a statement saying, “while we do not have all of the details yet, what we know for certain is that he is not the first Black man or person to have been shot or injured or mercilessly killed at the hands of individuals in law enforcement in our state or our country.”

Crump, also released a statement, saying, “ In the coming days, we will demand just that of elected officials in our state who have failed to recognize the racism in our state and our country for far too long. We all watched the horrific video of Jacob Blake being shot in the back several times by Kenosha police. Even worse, his three sons witnessed their father collapse after being riddled with bullets. Their irresponsible, reckless, and inhumane actions nearly cost the life of a man who was simply trying to do the right thing by intervening in a domestic incident. It’s a miracle he’s still alive.”

The Wisconsin Department of Justice of criminal investigation is leading the investigation assisted by the Wisconsin State Patrol and Kennesaw County Sheriff’s Office. There are no additional details currently available. The shooting came as demonstrators continue to protest for the killing of Breonna Taylor and George Floyd. The night before Blakes’ shotting, several protests erupted in Lafayette, Louisiana after police killed a Black man, Trayford Pellerin, outside a convenience store.