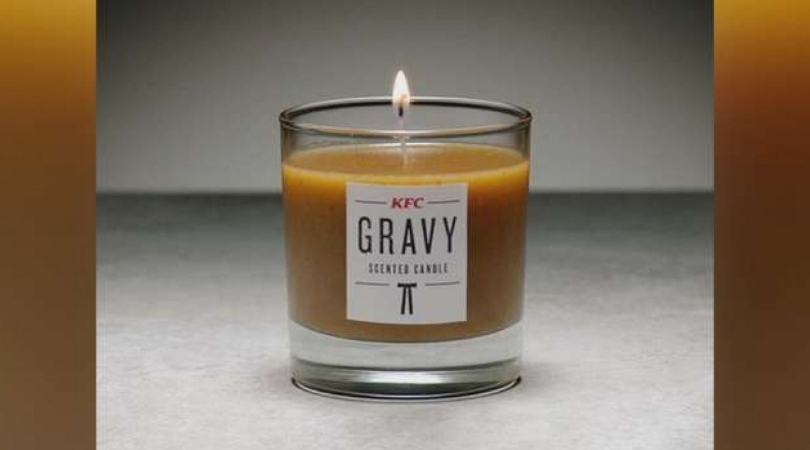 You know how sometimes you wander around the internet and see things you don’t need, but definitely want because of curiosity? It?s like your brain automatically connects with it, despite it being odd, so you go ahead and buy it because you can. Well, here?s is your next ?why the heck did I buy this in the first place?? product. Introducing the incredible but very random KFC Gravy Scented Candle!

Yes, why anyone would like a gravy scented candle is beyond me. First of all, gross. Second of all, who comes up with this crap? Just because gravy is one of life’s greatest condiments mean that people want to smell it 24/7! Did the KFC franchise just wake up one day and decide that we humans needed our surroundings to smell like a unique KFC saucy fragrance?

I mean, I get it, the gravy is pretty fantastic, but ONLY when you?re eating it, not using it as a house scent! It?s weird and terrifying at the same time thinking about someone wanting their home to smell like pure gravy. Can you imagine walking into someone’s house and automatically getting a whiff of that? Here is what I picture Colonel Sanders saying to his guests when they come over:

“Are you cooking something?”

The fried chicken chain, luckily, is only selling 230 limited edition candles and will be available on a first come first served basis. How do you get these new gravy candles? Visit kfc.co.uk/gravycandle for a chance to win. May the odds be ever in your favor.

But wait, there?s more! Need a new podcast to listen to? To accompany the ?mouthwatering scent?, KFC has also launched their full-on KFchill Experience, which allows users to listen to the sound of their KFC Gravy Mega Box, choosing between the sounds of falling fries, frying chicken, or simmering gravy. Think of it as an audiobook for chicken lovers. Just don’t? be surprised if you end up ordering or going to your local KFC after listening to them.

Surprisingly, this isn’t the first time KFC release an ?exclusive? scented candle. Back in 2016, the company released a fried chicken scented candle in New Zealand, making a total of 25 candles. Then, in 2017, KFC Japan released a fried chicken scented spices bath bomb for people to bathe in the scent or it’s 11 herbs as spices. Which honestly, sounds truly disgusting and should be illegal. How is that even possible to rinse yourself with? Wouldn?t you end up smelling like chicken the whole day? How are people not tempted to drink that? So. Many. Questions.

I?m gonna go with a no on this one KFC, thank you though. I?ll just stick to eating your tasty fast food.