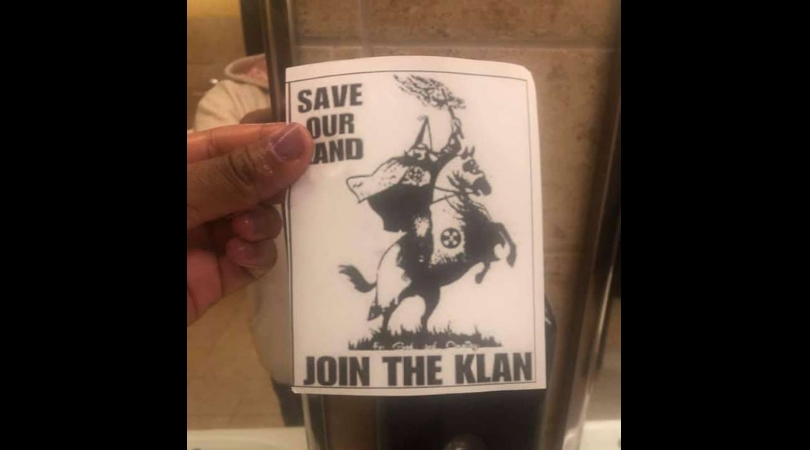 The East Central Independent School District, along with the FBI, have launched an investigation after a student found flyers asking people to join the Ku Klux Klan. The districts spokesman, Brandon Oliver, stated a student found the flyers in the bathroom, promoting the hate group on campus. The flyers read, “Save Our Land,” featuring a Klansman riding a horse holding a fiery torch. Underneath the image, the text reads, “JOIN THE KLAN.”

The ECISD Police Department is working with state, federal, and local agencies that specialize in intelligence to apprehend those responsible for distributing the flyers and currently have an open investigation. School officials stated the incident is “very concerning” to the district and will make sure to punish the individuals accordingly when they are caught.

This is bad, to the max. Parents, get involved. Administration and staff are limited by resources they can employ, but students are the heart of the school. It’s not snitching on a fellow, it protecting other students and school. These things need to be stop, nipped in the butt.

A junior at the school was said to have found the flyer and immediately sent a photo to his mother who then posted it to her Facebook page to raise awareness. Authorities learned about the incident after the other posts circulated on social media. The principal eventually reached out to the mother and alerted the San Antonio police. The mothers post read,

“These type of acts shouldn?t be taken lightly so I?m Hoping to get some media support to raise awareness with hopes to put pressure on any students that may be conspiring to do harm!!” the concerned mother posted on Facebook. “Somebody come Stop me from going flip my sons school upside down!!!”

Data from The Texas Education Agency showed the majority of students in East Central High School last year were 72 percent Hispanic, 17 percent white and about 9 percent black. In San Antonio Texas, according to the Southern Poverty Law Center who tracks where hate groups are active, there is a chapter of a neo-confederate group and a chapter of one white nationalist. There are also four black active nationalist groups that have chapters in San Antonio.