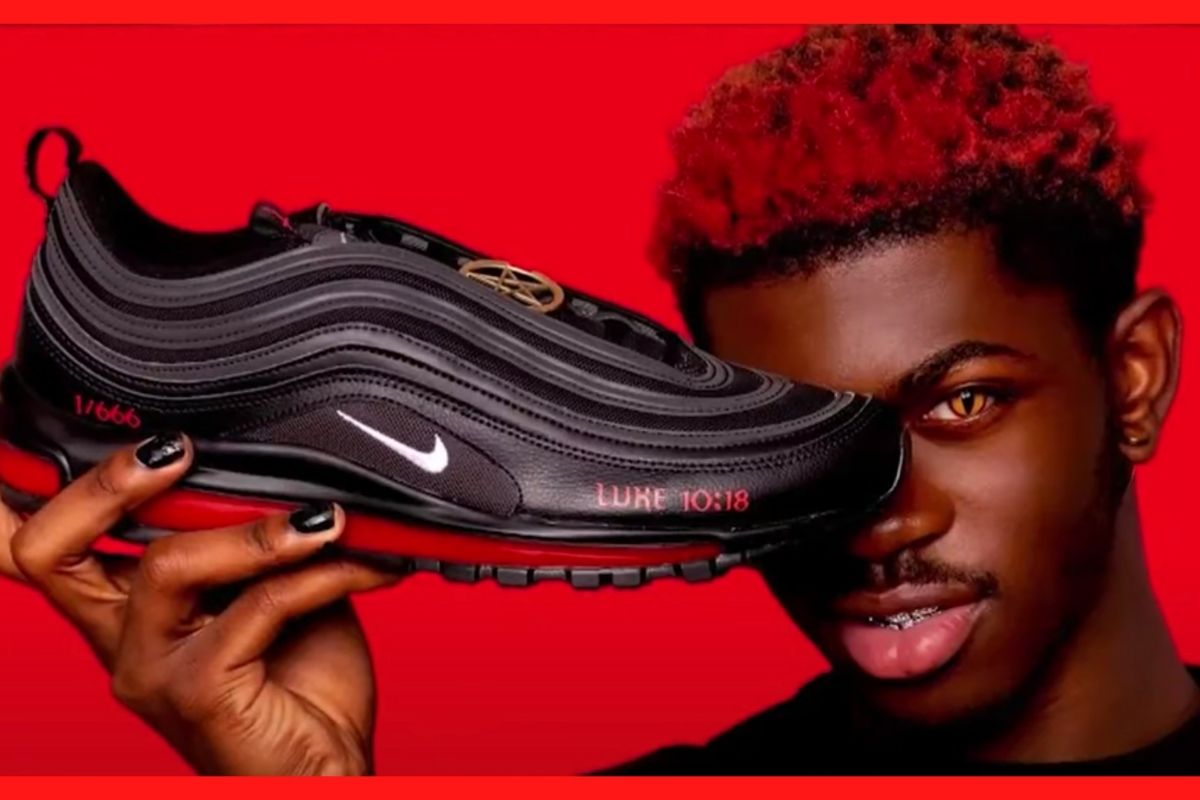 Satanic panic in the middle of a plague?

The rapper Lil Nas X found international stardom in 2018 when his hit crossover single “Old Town Road” spent nineteen weeks atop the US charts. During that period, Nas X came out as gay making him the only artist ever to do so while having a number-one record. And this week, he made news again… for some rather devilish reasons. First, Nas X dropped a line of so-called “satan shoes,” followed up by the release of his wild new music video.

In collaboration with the New York streetwear company MSCHF, this week Lil Nas X released a line of modified Nike Air Max 97s: 666 pairs of vintage-style sneakers that each feature a single drop of human blood within the red and black design. The classic Nike mid-sole air bubble is filled with roughly 2 fluid ounces of red ink, which is said to be a dilution of the blood.

“Luke 10:18” is also stitched along the side of the shoes in red thread, referring to the bible verse which reads: “I saw Satan fall like lightning from heaven.” The shoes also feature two pentagrams: one charm on the laces, plus a black pentagram on the shoes inner red sole.

The Brooklyn-based art collective MSCHF had previously released “Jesus Shoes? containing real holy water. But this project with Lil Nas X was not created with the permission of Nike. Though the shoes are made from Nike Air Max 97s, though the mainstream sports brand has vocally distanced itself from the edgy design, going so far as to file a trademark infringement lawsuit against the rapper.

Regardless of Nikes corporate stance, being limited edition custom Nikes (albeit unauthorized), Lil Nas X’ Satan shoes sold out in less than a minute.

“Montero (Call Me By Your Name)”

The music video for “Montero,” which dropped on March 25, continues in Lil Nas X’s aesthetic exploration of classic biblical concepts. In the stylishly theatrical — borderline Rococo — video, Nas X appears in the Garden of Eden, the Kingdom of Heaven, and, pole-dancing into Hell… where he gives the devil a full-on lap dance. The lyrics address, frankly, male-on-male desire.

It’s obviously no surprise that Christians and conservatives are voicing their outrage over Lil Nas X’s appropriation of the bible. And in response, the musician tweeted: “I spent my entire teenage years hating myself because of the s**t y’all preached would happen to me because i was gay. So i hope u are mad, stay mad, feel the same anger you teach us to have towards ourselves.”

Lil Nas X’s clapbacks to the haters, naturally, turned into instant (and fairly wholesome) memes. One of his best responses?

there was no system involved. i made the decision to create the music video. i am an adult. i am not gonna spend my entire career trying to cater to your children. that is your job. https://t.co/SzjjYe2tf4

Y’all worried about Lil Nas X giving the devil a lap dance? When I was 12, I witnessed the devil in a gay relationship w/ Saddam Hussein. Your children will be fine 😂 pic.twitter.com/VB6A2ZyJFx

WATCH: Teen Shot and Killed Parents Because He Thought They Were Satanists