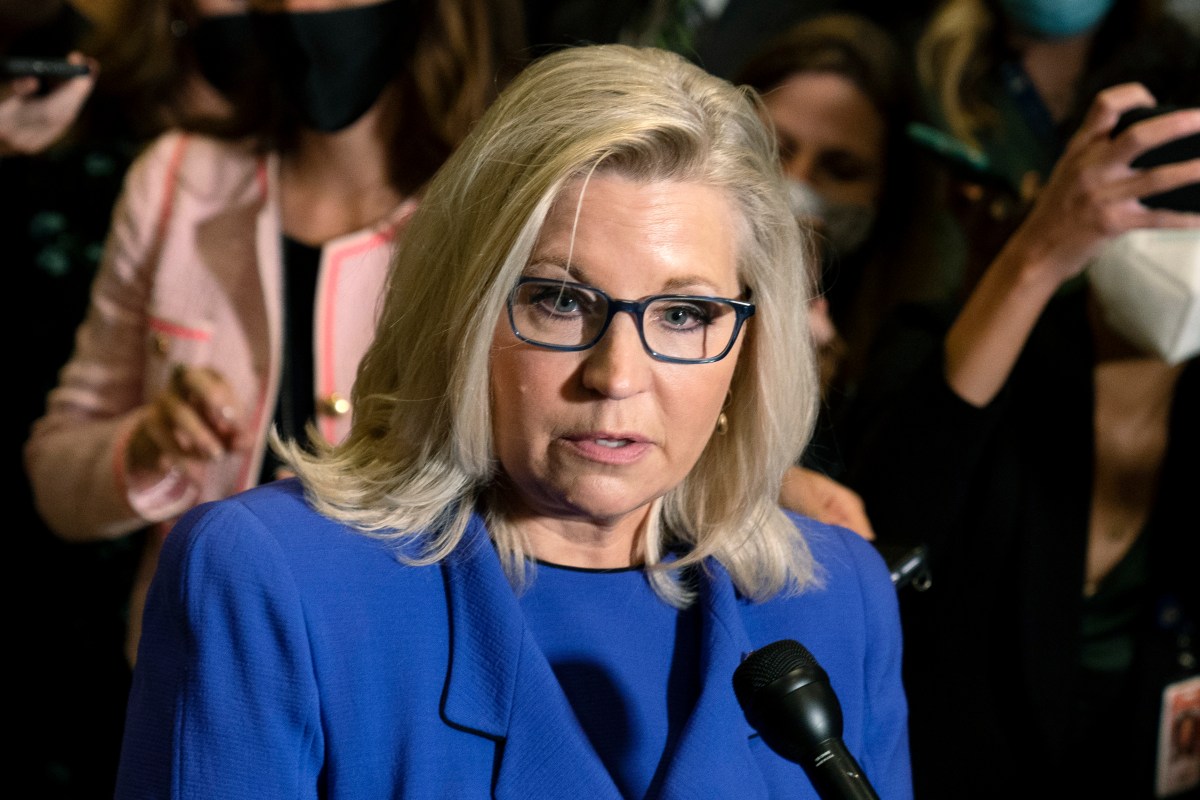 Representative Liz Cheney of Wyoming was ousted today from her House Republican leadership position today. As the House Republican Conference chair, Cheney was the third-ranking Republican representative from 2019 to 2021. But since taking on a vocal stance against former President Donald Trump’s refusal to cede the 2020 election, she’s been serving with a target on her back.

Following the deadly U.S. Capitol riot on January 6, Rep. Liz Cheney, the daughter of former vice president Dick Cheney and a U.S. representative for the state of Wyoming’s at-large district, was one of ten Republicans who supported the impeachment of then-president Donald Trump for inciting an insurrection. Since then, Cheney has doubled down on her rebuke of Trump and as the Republican party struggles to secure its post-Trump identity, that attitude has cast her as something of an outcast within the House GOP.

On February 5, Republicans in the House of Representatives voted overwhelmingly to keep Cheney in her high-ranking GOP leadership: House Republican Conference chair. But as we progress further into the Biden Administration and Donald Trump continues to sound off about so-called election fraud, Cheney has not let up in criticizing the former president. And now, it seems, her colleagues have changed their mind. For the past few months, House Minority Leader Kevin McCarthy of California and House Minority Whip Steve Scalise of Louisiana have rallied against Cheney, urging Republicans to strip her of her position as the GOP conference chair. They allege that her talking points undermine the “unity” of the party.

As a result, a closed-door voice vote was held this morning. It ended in the ouster of the outspoken House Republican leader.

Leading Up to the Vote

On May 5, Liz Cheney published an op-ed in The Washington Post entitled “The GOP is at a turning point. History is watching us.” In it, she responded to Donald Trump’s repeated claims that he is still the rightful president. In addition to threatening American democracy, Cheney believes Trump’s unrelenting rhetoric can, and likely will, incite violence again.

On Monday, she tweeted: “The 2020 presidential election was not stolen. Anyone who claims it was is spreading THE BIG LIE, turning their back on the rule of law, and poisoning our democratic system.”

And on the eve of her ouster, Cheney made a defiant speech before fellow lawmakers on the House floor before Congress.

‘The Electoral College has voted. More than 60 state and federal courts, including multiple judges the former president appointed, have rejected his claims. The Trump Department of Justice investigated the former president’s claims of widespread fraud and found no evidence to support them. The election is over. That is the rule of law. That is our constitutional process. Those who refuse to accept the rulings of our courts are at war with the Constitution. Our duty is clear. Every one of us who has sworn the oath must act to prevent the unraveling of our democracy.”

Following the vote to remove Cheney from her leadership, Cheney made an additional speech. Recordings are not available, but insiders say it drew boos and jeers from her Congress colleagues. Speaking after the vote, the Wyoming Republican told reporters that even without her party leadership role, she will do “everything I can to ensure that the former president never again gets near the Oval Office. We must go forward based on truth. We cannot both embrace the big lie and embrace the Constitution.?

Expelling Liz Cheney from leadership won’t gain the GOP one additional voter, but it will cost us quite a few.

What It All Means

Considering Liz Cheney’s obvious connection to the Bush administration, particularly to his powerful vice president Dick Cheney, demoting the congresswoman represents an unflinching confirmation of the Republican party’s extreme agenda. With Joe Biden in the White House, the party of Trump, it seems, will remain just that. Rep. Elise Stefanik of New York, a centrist politician-turned-full-on Trumper is now bidding to fill the vacated leadership position.