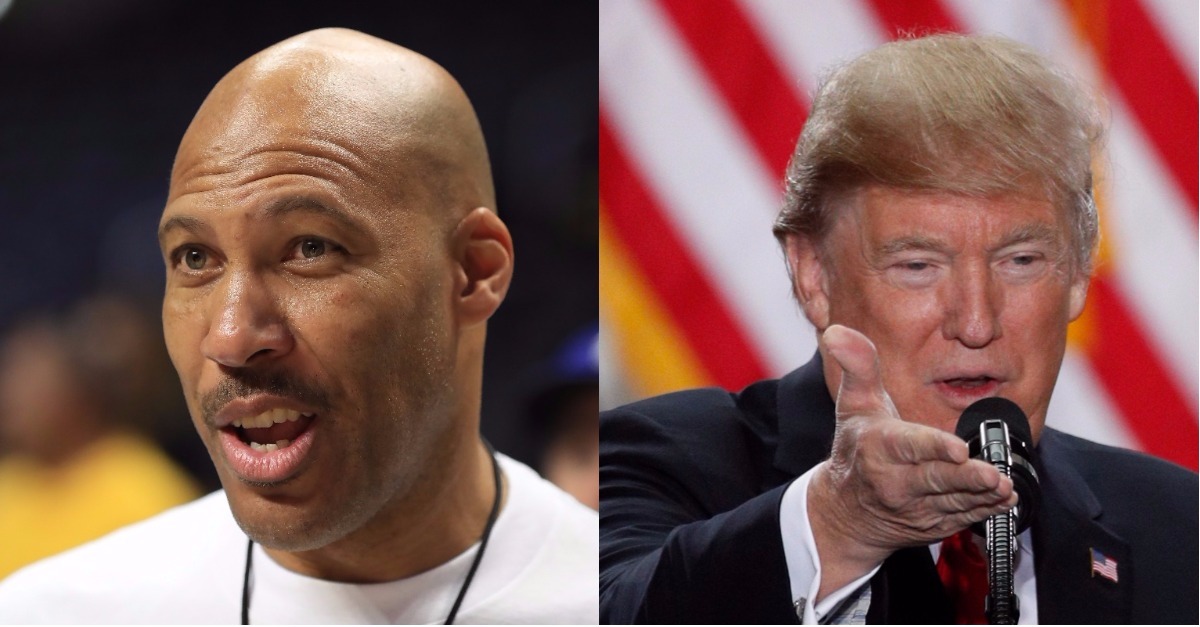 Basketball dad LaVar Ball has been trading barbs with the president for weeks, and his latest jab was more fuel on the fire.

Ball tweeted a cartoon video featuring an animated version of himself leaping over Donald Trump to slam a dunk into the hoop behind the commander-in-chief. Cartoon Trump falls to the ground as the basketball bounces off his head.

After Trump falls to the ground, he whips out a cellphone which features a tiny Twitter feed that loops the GIF back to the beginning.

The literal slam was the latest in the ongoing feud between Trump and Ball, after the father of three rejected the president’s claims that he was responsible for getting Ball’s son LiAngelo out of a Chinese prison after a shoplifting arrest.

RELATED: UCLA basketball player whose father wouldn?t thank Trump had no idea what he did was ?stupid?

After the three UCLA players involved thanked the president for his role during a press conference, Ball questioned Trump’s role.

?Who? What was [Trump] over there for? Don?t tell me nothing. Everybody wants to make it seem like he helped me out,? Ball said, according to ESPN.

Trump fanned the proverbial flames when he called Ball “ungrateful,” and tweeted that he should’ve “left [the UCLA players] in jail.”

He also called Ball ?a poor man?s version of Don King, but without the hair.?

Ball, of course, didn’t let the slight go. He appeared on CNN with Chris Cuomo to say that he wouldn’t be thanking Trump because “doesn’t go around saying thank you.” The father downplayed the severity of his son’s charges, although he — and fellow UCLA player’s Cody Riley and Jalen Hill — were looking at a potential decade in jail. He added that the crime was ?victimless? and ?not going without punishment.?

RELATED: Snoop Dogg chimed into the battle between LaVar Ball and Trump ? and he pulled no punches

In late November, Ball taunted the president once more, joking that he would be sending a pair of his eldest son Lonzo Ball’s signature “Zo2″ shoes.

?I gotta ship some to Trump so he can calm down a little bit. … Those shoes is coming to you, Trump, whenever you put them on, you gonna ease up a little bit,” he said to a TMZ cameraman.

The entrepreneur dad — who recently yanked both his younger sons out of school to personally train them for overseas basketball — has been making definite use of his time in the limelight.

According to a marketing firm, the CEO of “Big Baller Brand” had earned his company more than $9 million (and counting) in free coverage since the beginning of his spat with Trump.