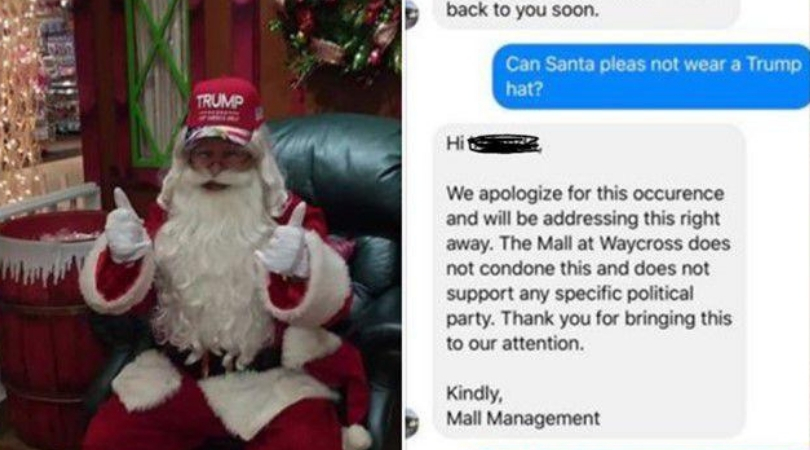 Well, it looks like Santa is a Trump supporter and customers are not happy about it one bit. A Georgia Santa Claus who sparked controversy after posting a photo on social media of himself wearing a MAGA hat supporting President Donald Trump at a mall is now receiving hate comments from users.

Frank Skinner has played Santa Claus every Christmas for nearly 50 years, including the past 14 years at the Waycross Shopping Center in Georgia. As the mall was closing, and there were no children around, he decided to nonchalantly switch his hats and pose with the red hat for fun.

A Georgia mall Santa Claus says he didn't mean to offend anyone when he posted a photo of himself posing with hat in support of President Trump. https://t.co/ZMnaVnt8RI

Skinner said he did so very innocently, not thinking twice about the situation. He believes someone saw the photo on his Facebook page and sent it to the Georgia mall management, and was quickly told not to come back to work. Feeling like his constitutional rights were taken away, he stated he didn’t necessarily intend to “create a firestorm by doing that but simply intended to post the photo on my page for a little humor, as I have many friends and family who, like me, support our president.”

The fake Santa stated the photo made its way to mall management with a request to remove the hat, which he believes was made out of context since he wears the hat all the time. Since that day, he is unsure what actions the mall will take next after he was replaced while management investigates.

Frank Skinner lost his job as a mall Santa in Waycross, GA for wearing a Trump hat & taking a picture – at a time when he says there were no kids around. You'll hear from him exclusively at 11pm on @FCN2go 🎅 pic.twitter.com/AXw9XBBeE6

Despite what the outcome might be, Skinner said he had no intention of offending anyone and has learned “a serious lesson.” He wrote, “I in no way meant to cause anyone discomfort,” Skinner said. “At the time I thought it was harmless fun. Now I realize in this day and age that I should not have posted it. Obviously, it did offend some folks. I can assure everyone that was not my intent. I have learned a lot from this. Going forward I will keep this in mind.”

I have said it once, and I’ll keep saying it until these types of stories go away. Regardless if you are a President Donald Trump supporter, or not, just get rid of those damn, obnoxious Make America Great Again Trump hats. They are only causing unnecessary problems. As if we needed more to worry about.