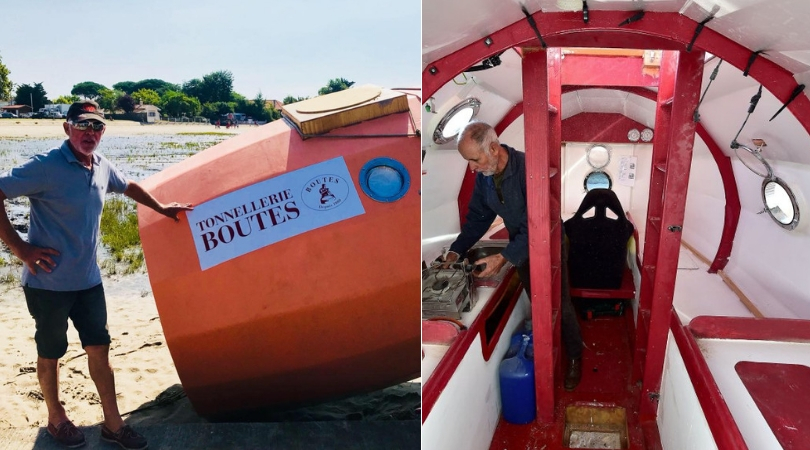 Anything is possible if you just believe, right? Well, that’s according to his 71-year-old Frenchman who has decided to set sail the Atlantic Ocean in a barrel! Yes, an actual barrel. Jean-Jacques Savin barreled out of El Hierro in Spain’s Canary Island on Wednesday and decided to head toward the Caribbean, 3,000 nautical miles away. What is his method of transportation? A bright orange barrel-shaped capsule (about 10 feet long and 6 feet 8 inches wide) that will use the ocean current to propel him along the way.

Savin said he hopes to reach his destination in just three months. His resin-coated, plywood vessel is said to be strong enough to survive attacks from orca whales and was built to withstand the constant battering from waves. It contains a sleeping bunk, storage areas, a kitchen and a pothole in the floor that he can use to watch fish. He described his venture as a “crossing during which man isn’t the captain of his ship, but a passenger of the ocean.” Luckily, he is no stranger to the ocean since he has already crossed the Atlantic four times using a sailboat.

The barrel also has a solar panel that generates energy for communications and GPS positioning. To help him track his path, Savin will be dropping markers along his trip to help oceanographers study currents. The former military paratrooper, pilot and park ranger has had access to social media and most recently updated that the barrel was “ behaving well” and the trip was off to a very smooth start.

His budget for the journey was $68,000, which was raised through crowdfunding. He hopes to reach Barbados, but would prefer a French Island such as Martinique to make paperwork easier to bring the barrel back. The best thing about the whole trip? The spontaneous adventurer has stored a bottle of Sauternes white wine and a block of foie gras for New Years’ Eve and a bottle of Saint-Emilion red for his birthday on January 14th.

What a brave soul! You go, Savin, we are all rooting for you!