Man Stabbed to Death in Fight Over Popeyes Chicken Sandwich 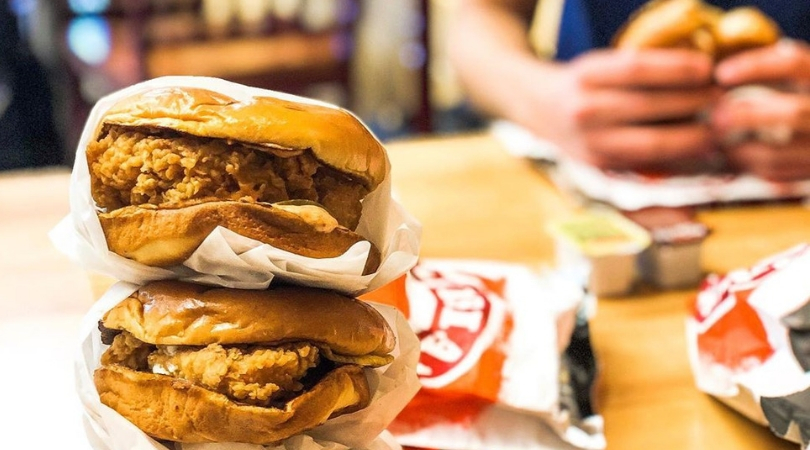 If you are out and about trying to get ahold of the new chicken sandwich from Popeyes, you might want to sit this one out…unless you want to get stabbed. Yes, authorities in Maryland are searching for a man who fatally stabbed another man in an altercation while they were waiting in line for Popeyes’ new menu item. This is why we can’t have nice things, people.

In case you have been living under a rock, the new sandwiches made their initial debut back in August, which drew long lines all around the country. The popularity of the chicken sandwich caused quite a debate on social media about whether Popeyes or Chick-fil-A had the best version of the sandwich. However, Popeyes later announced it couldn’t keep up with the popular demand and went on hiatus.

📍Washington, DC – …and here we have the leaning tower of….POPEYES CHICKEN SANDWICH (it has returned!!!) 🥪🍗 Extending National Sandwich Day another day by finally getting my hands on the Popeyes Chicken Sandwich that ran out before I got to try it back when it first released in August!! 😍 I too agree the chicken is very juicy, tender, and crispy on the outside and the buns were just my type 😙 Do you think the Popeyes Chicken Sandwich is worth all the hype? Let me know! 😋 Lucky there was no line at the location we were at 😅 📷 [35mm lens] Popeyes Chicken Sandwich | 👋: @dq_blizz and thanks for buying 5 of them and letting me take pics of 4 of them 😍 . . . #sandwiches #nationalsandwichday #sandwich #friedchicken #dmvfoodiecrew #zipkick #popeyes #chicken #chickensandwich #eggtart #fujixa #fujixa5 #meat #americancuisine #buns #popeyeschicken #bread #restonva #fastfood #foodphotography #pickles #popeyeschickensandwich #vafoodie #restonfood #foodie #食べ物 #crispychicken #yelpdc #yelpeats #popeyeslouisianakitchen @popeyeslouisianakitchen

It wasn?t until its return on November 3rd, which happened to be National Sandwich Day. Which is why those who didn’t try it before decided to try it out for themselves and cause the commotion all over again. That commotion included this stabbing. According to authorities, an argument between two men began inside the restaurant, when one man cut in front of another man in line, specifically designated for ordering the popular chicken sandwiches.

The argument then continued outside, where one man stabbed the other. Responding officers found the victim in the parking lot suffering from multiple stab wounds. The 28-year-old man was immediately taken to a local hospital where he was pronounced dead an hour later.

Through a statement, the fast-food chain responded to the incident, noting, “We are very sad to hear about the tragedy in Maryland. They added: “We do not yet know whether this was the result of a dispute over one of our products or something unrelated, but there is no reason for someone to lose their life on a Monday night in a parking lot. Our thoughts are with the victim’s family and friends and we are fully cooperating with local authorities.”

Prince George’s County Police Department reportedly spent hours at the crime scene and tried to identify the suspect but have yet to find the man. If you have with information about the stabbing, which took place on the 6200 Block of Livingston Road, you are asked to call Prince George’s County Crime Solvers at 1-866-411-TIPS.

Putting my two cents in here, this to me seems so ridiculous. These grown men are fighting over a freaking POPEYES CHICKEN SANDWICH. How pathetic is that? A life was taken because of something you can easily make at home? Come on, guys. This is stuff children are expected to do, not men.

Good luck with your life in prison over a $4 dollar sandwich, my dude.