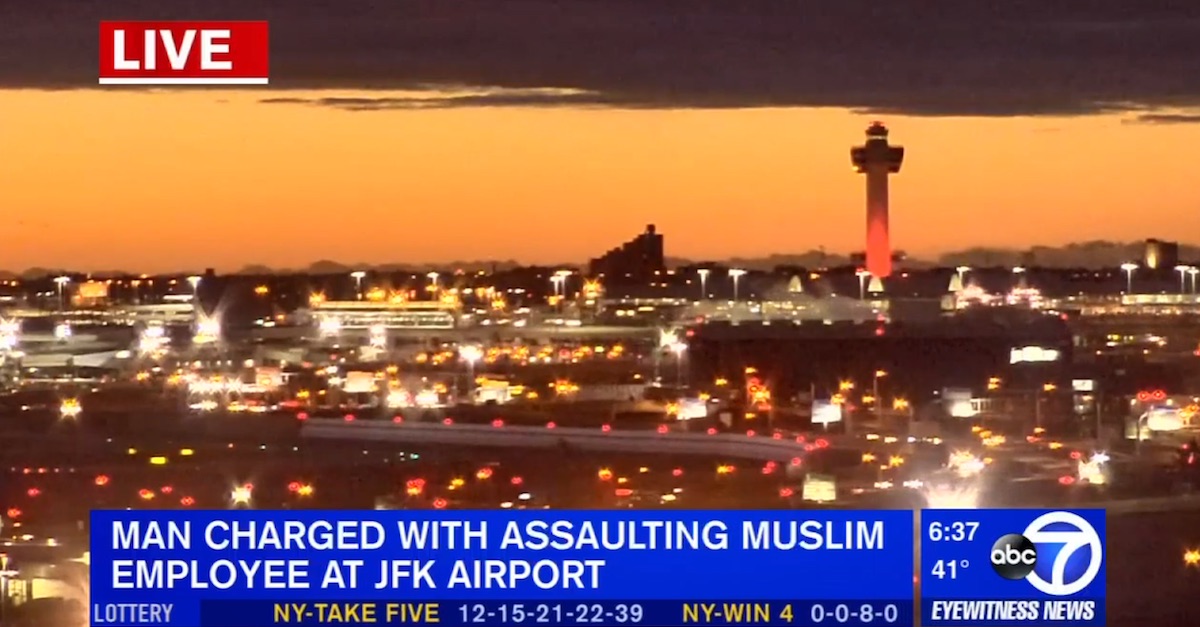 A Massachusetts man who returned from a trip to Aruba and was waiting for a connecting flight from John F. Kennedy International Airport in New York Wednesday night has been charged with a hate crime for what he reportedly did at the Delta Sky Lounge.

RELATED: Man charged with a hate crime after he stabs victim leaving a mosque with his family

According to MassLive, 57-year-old Robin Rhodes mocked, hurled abuse at, and even kicked a Muslim Delta Air Lines employee who was wearing a hijab.

Rabeeya Khan was sitting in her office at the Delta Sky Lounge at the time of the alleged assault.

“F*ck Islam, f*ck ISIS,” Rhodes reportedly yelled before mocking Islamic prayer by getting on his knees and bowing.

Rhodes also said President Trump was going to “get rid of all of you.”

“Trump is here now. He will get rid of all of you. You can ask Germany, Belgium and France about these kind of people. You will see what happens,” he said. “Are you f—ing sleeping? Are you praying? What are you doing?”

At one point, according to Queens DA Richard Brown, Khan asked Rhodes what she did to him to deserve such treatment.

RELATED: President Obama says that attacks against this group “tears at the very fabric of our nation”

“You did nothing, but I am going to kick your f—ing ass,” Brown said, relaying Rhodes’ words.

“Rhodes then allegedly kicked Khan in the right leg, then blocked the door as she tried to leave,” Brown said.

When he was arrested, Rhodes didn’t seem too concerned about what had taken place.

“I guess I am going to jail for disorderly conduct,” he said. “I couldn’t tell if it was a man or woman because their back was to me and they had something covering their head.”

Rhodes’ inexplicable outburst could cost him up to four years behind bars.