Mariah Woods was sexually abused by her mom’s boyfriend, and her mom knew it, court records allege 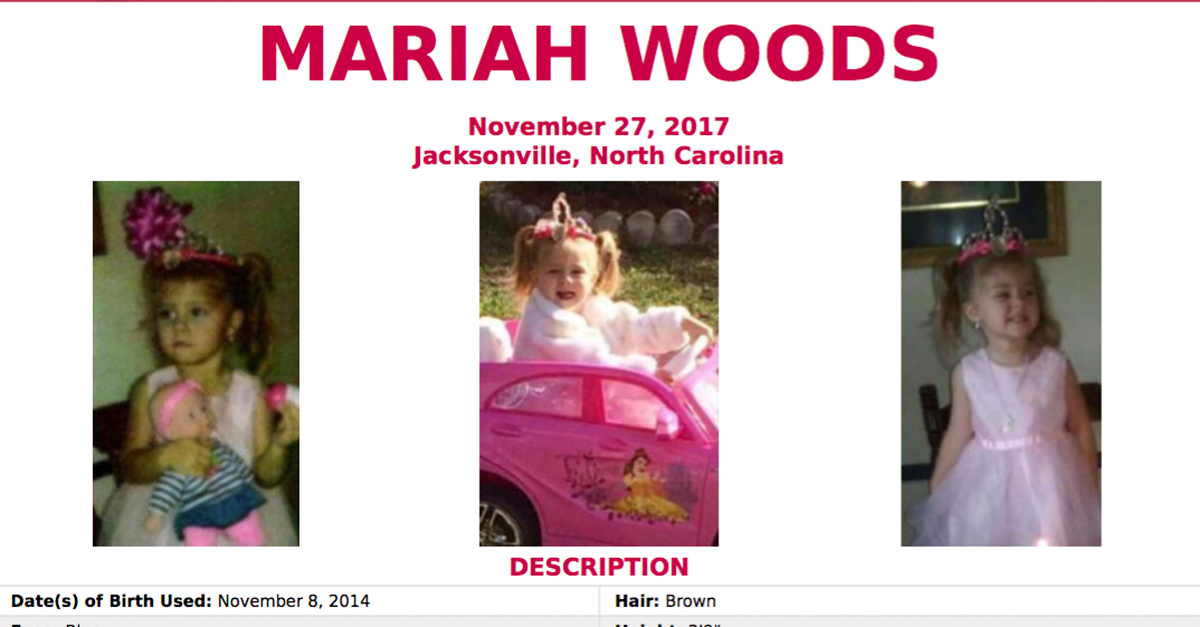 FBI via AP, File
This image released by the FBI shows the seeking information poster for Mariah Woods. The FBI says more than 700 people came to join in the search for Woods, a missing North Carolina child. A statement from the FBI said Friday, Dec. 1, 2017 initial search finished more quickly than anticipated because of the number of people who turned out. Authorities have been searching for 3-year-old Woods, who was reported missing from her home on Monday. (FBI via AP, File)

Stunning accusations have emerged in the death of 3-year-old Mariah Woods. The little girl’s mother’s boyfriend allegedly sexually abused her before her death — and her mother knew it has happening, according to Child Protection Services documents.

Earl Kimrey, 32, the man accused of dumping the girl in a North Carolina creek, was seen putting “his penis in the mouth” of the girl by a witness who lived in the family’s trailer with them, according to to the documents.

The girl’s mother, Kristi Woods, 29, who made a tearful plea for the return of her daughter following her overnight disappearance, “knew Mr. Kimrey was sexually abusing the juvenile Mariah,” the documents state.

Kimrey also allegedly abused the girl’s two brothers, ages 5 and 10. An alleged meth and heroin addict, Kimrey reportedly hit them with a belt and once punched the older brother in the face, according to the documents, which were obtained by JD News in Jacksonville, N.C.

Authorities have not said what they believe was the girl’s cause of death, but they have accused Kimrey of moving her body from where she died, saying Kimrey knew her death was not natural.

RELATED: Dr. Phil tore this dad a new one after playing a video of a spanking, but some are saying it was no big deal

Little Mariah was reported missing the morning of Nov. 27. Her mother claimed she had put her daughter to bed the night before only to wake up and find her gone. She said the last person to see Mariah was her live-in boyfriend, Kimrey, who apparently told her to go back to bed around midnight.

RELATED: Man allegedly made pornographic videos of his baby stepdaughter and shared them online

The two claimed Mariah had been taken in the middle of the night, but the girl’s father, Alex Woods, immediately suspected Kimrey of foul play.

Divers recovered her body late Saturday from the bottom of a creek, located about 25 miles from Mariah’s home in Jacksonville.

Kimrey appeared in court on Monday for his first hearing. He was wearing body armor and was surrounded by guards. He has not yet made a plea.

Mariah’s father is demanding custody of his two sons he has with Kristy.

Alex Woods said the last time he saw his daughter was in June 2016, and that since then it’s been a custody battle in the courts, where he hasn’t had success.

“The system failed,” he told JDNews.