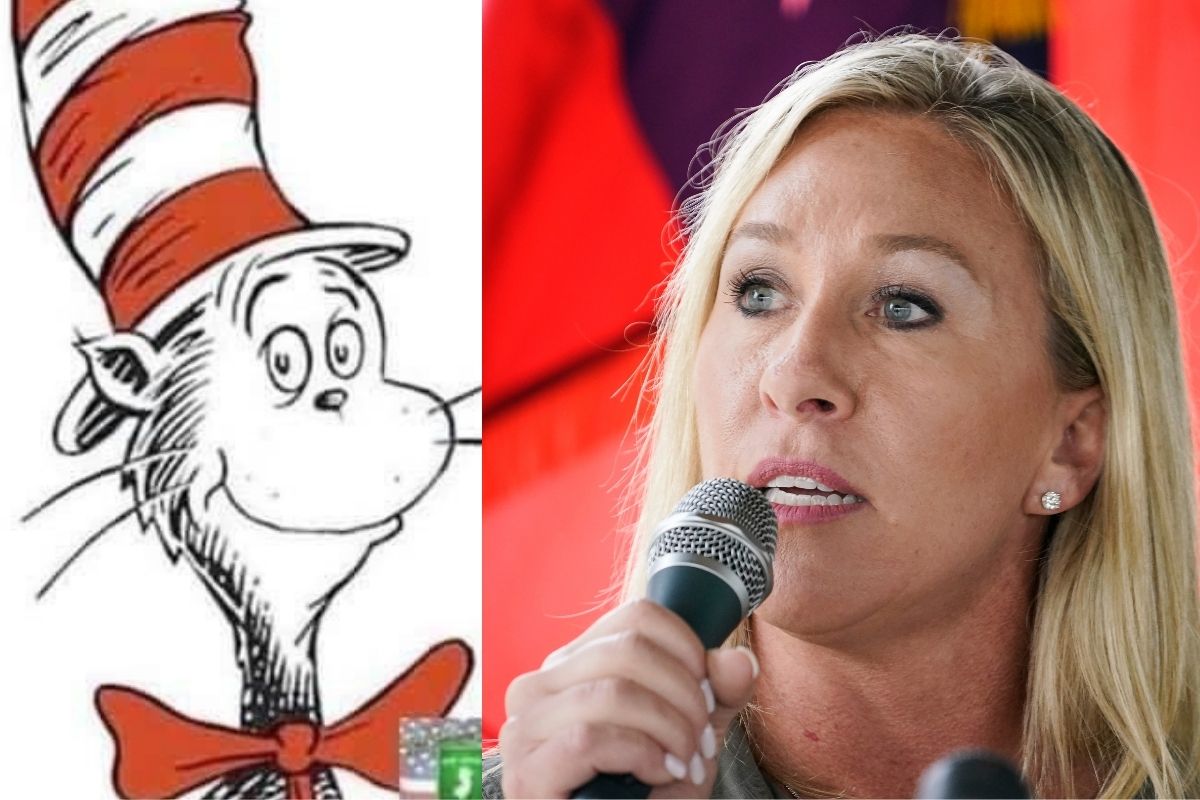 What a week. In the wake of Dr. Seuss Enterprises pulling six titles from further publication, the world has come to reckon with some racially-charged aspects in the beloved children’s author’s work. Now the controversial Georgia representative Marjorie Taylor Greene has gotten involved, unsurprisingly, to further politicize the moment on social media. On Twitter, the politician shared a Seuss-style nursery rhyme condemning President Joe Biden — in quippy lines that are pointedly offensive.

Rep. Marjorie Taylor Greene and Dr. Seuss are Not the Same

It’s no surprise that Marjorie Taylor Greene has chosen to align herself with the, now, somewhat-maligned Dr. Seuss. The Republican rep has openly supported baseless, far-right conspiracy theories including Pizzagate, QAnon, so-called “Jewish space lasers,” and false flag school shootings. After a video of Greene verbally harassing a Parkland shooting survivor surfaced last month, the House of Representatives voted to remove the freshman congresswoman from all committee roles. Greene has explicitly referred to herself as a so-called “victim of cancel culture.”

Repurposing the Cat in the Hat imagery, alongside the buoyant speech patterns of Theodor Geisel, a.k.a. Dr. Seuss, implicates Democrats (incorrectly) in the decision to rethink the circulation of certain Dr. Seuss books. As if they are martyrs for the same cause. Of course, Geisel was an outspoken political advocate too… for anti-fascism. Or, as Greene and her GOP colleagues like to call it, “antifa.” For years, Geisel penned political cartoons for leftist PM magazine that attacked the isolationist policies of Charles Lindbergh and encouraged the United States to enter World War II. “America First,” a term near and dear to Greene’s idol, former President Donald Trump, was the exact stance that Geisel sought to undermine and satirize through his art.

And that’s not all: Geisel was then hired by FDR to create anti-fascist war propaganda, eventually becoming Captain Geisel in the Motion Picture Unit of the U.S. Army. (Learn more about his fascinating career here.)

The picture is accompanied, simply, by a hashtag: #impeachbiden.

On March 3, Marjorie Taylor Greene posted another tweet in which she purportedly takes up the cause of defending Dr. Seuss. (See below.) But Considering Theodor Geisel’s historic contributions to the liberal cause, Marjorie Taylor Greene’s twisted messaging is objectively a greater insult to his legacy than, say, deemphasizing Read Across America Day or ceasing the publication of If I Ran the Zoo.

In this earlier tweet by Marjorie Taylor Greene, the presence of The Cat in the Hat alone drives home the intent of the verse. Because, as a student of poetry, I must point out that the cadence here is way off.

The Dr. Seuss post is just the latest Marjorie Taylor Greene long string of masterminded drama. Last week, she mocked fellow lawmaker Rep. Marie Newman’s Transgender Pride Flag by hanging a flag of her own which read: “There are two genders: male & female. Trust the science.” So far, Greene has managed to captivate the news cycle through co-opting logos that are distinctly separate from her own beliefs, i.e. Dr. Seuss, the Transgender Pride Flag. I don’t doubt that next week will bring a new, similar story. Despite Greene’s removal from all House committees, she uses this form of personalized propaganda to make her voice heard on Capitol Hill. The success of this pattern emphasizes the purely symbolic nature of her continued place in Congress.

Though I must say, there’s one thing that the master propagandist Dr. Seuss and Marjorie Taylor Greene do have in common: they’re well aware of their audience. Theodor Geisel’s audience changed throughout his lifetime, from politically engaged New Yorkers to beleaguered Army troops to, finally, children getting the hang of phonics. And as Marjorie Taylor Greene remains in the spotlight, her handle on her own audience will be telling for the future of both parties.