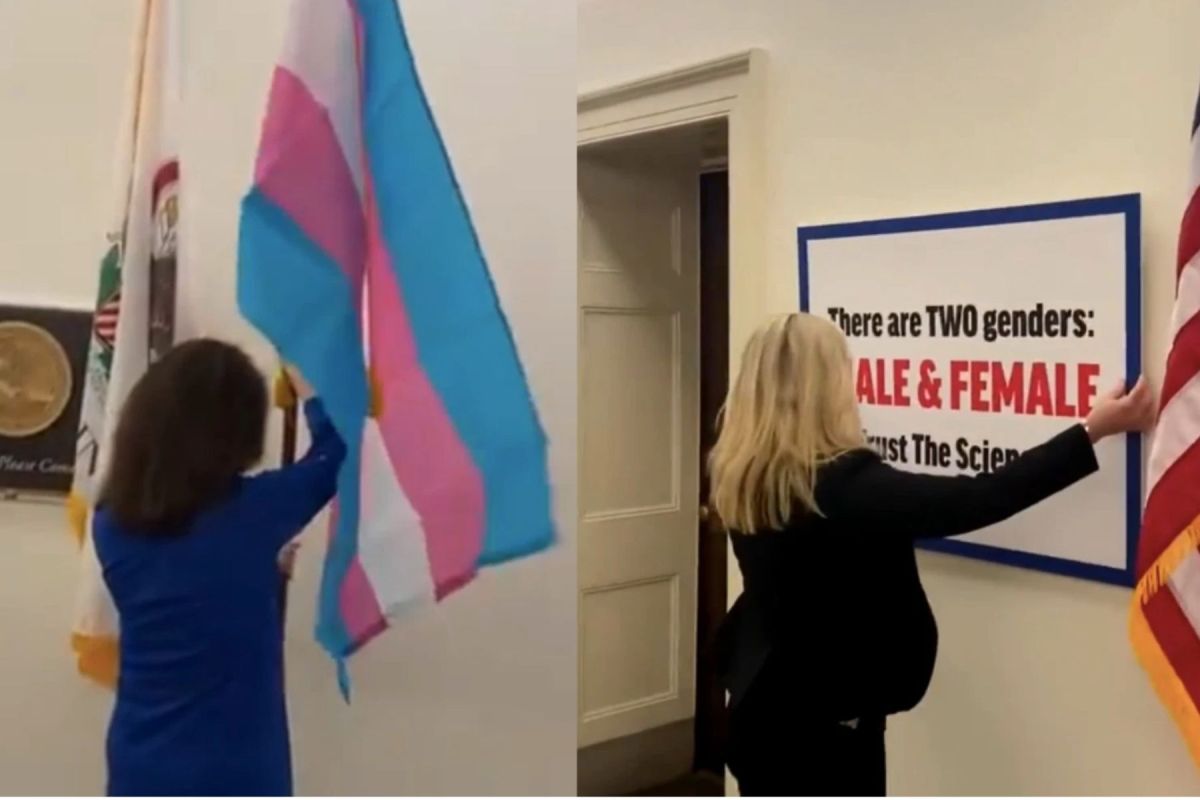 Via WGN
Via WGN

And now, she’s back in the news. This time for antagonizing her colleague, Rep. Marie Newman of Illinois, by hanging a sign that reads: “There are two genders: male & female. Trust the science.”

Our neighbor, @RepMTG, tried to block the Equality Act because she believes prohibiting discrimination against trans Americans is “disgusting, immoral, and evil.”

Thought we’d put up our Transgender flag so she can look at it every time she opens her door 😉🏳️‍⚧️ pic.twitter.com/dV8FatQFnx

The Equality Act, a bill that proposes prohibiting discrimination based on gender identity or sexual orientation, is currently on the House floor. Illinois U.S. Rep. Marie Newman is a vocal supporter of the legislation, and herself has a transgender daughter. While passionately advocating for the bill on Capitol Hill, Rep. Newman shared with Congress:

“The right time to pass this act was decades ago. The second best time is right now. I’m voting yes on the Equality Act for Evie Newman, my daughter and the strongest, bravest person I know.”

Since Rep. Marjorie Taylor Greene has called The Equality Act “disgusting,” “immoral,” “evil,” Rep. Marie Newman decided to hang a transgender pride flag in front of her own office — her which is right across the hall from Rep. Greene’s. Newman’s pointed display of the flag — which features blue, pink, and white stripes — honors the LGBTQ community was shared on social media. And boy, did it get Greene going.

Thought we’d put up ours so she can look at it every time she opens her door 😉🇺🇸 https://t.co/7joKpTh6Dc pic.twitter.com/aBGRSiIF6X

On February 24, GOP Rep. Marjorie Taylor Greene tweeted a video of herself hanging up a printed sign that reads “There are two genders: male & female. Trust the science.” The caption of the tweet says: “Our neighbor, @RepMarieNewman, wants to pass the so-called ‘Equality’ Act to destroy women’s rights and religious freedoms. Thought we’d put up ours so she can look at it every time she opens her door,” followed by emojis of a winking smile and the American flag — a direct mockery of Rep. Marie Newman’s own tweet roughly five hours prior.

The Democratic-led House is expected to vote on the bill today. And thanks to the feud between these lawmakers from Illinois and Georgia, the impending results have gained national attention. Although President Joe Biden has said that passing the Equality Act is a top priority, according to CNN, it still will face serious challenges should it move on to the Senate.