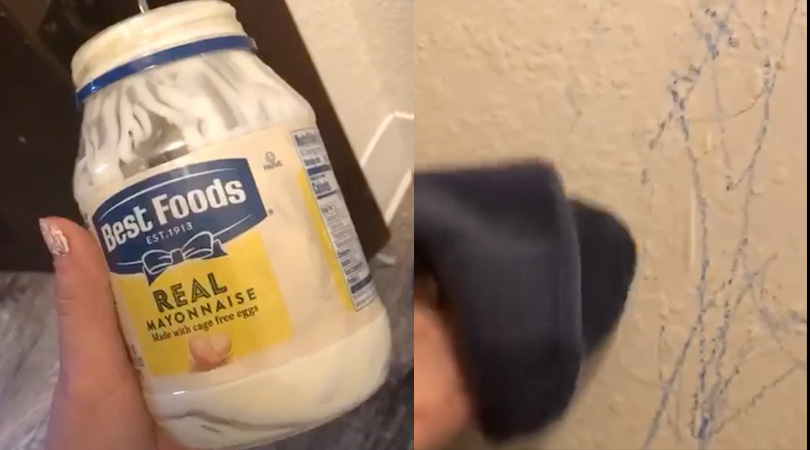 An Oregon mom found a Jackson Pollack tribute her kids made with crayon on one of the walls in her home and, after some Googling, found the ultimate mom hack to erase their handiwork.

Jessica Hard of Medford, Oregon took to Facebook to share her glorious discovery and, as you can hear in the video, she is absolutely stunned that this seemingly random idea not only worked but worked better than pretty much anything else you could imagine using. Soap? Water? Nope. Just grab some mayo.

And by the way, this isn’t just Hard’s weird idea. It’s all over YouTube.

Hard’s Facebook post was shared thousands of times by impressed parents who presumably then looked to the sky and thanked God for this pro-tip getting dropped into their laps. However, there were a few parents who still had some misgivings about the idea. More specifically, they were worried about what happens once the greasy mayo sets into their drywall.

One mom even said she has tried this before and, because she did not clean the mayo off after the crayon was erased, her walls were left with even more stubborn stains than the ones her kids left. So remember parents: mayo gets crayon off the walls, but you’ve got to get the mayo off after.

1. This is hilariously random. Presumably there is some sort of scientific, chemistry based reason for this but to a layman like myself this might as well be witchcraft. Like, just go ahead and mix pigeon feet in a jar with rose petals and rat’s milk and put it on a door knob to stop it from shocking people with static electricity.

2. If I had kids and tried this there is no way my wife wouldn’t yell at me. I’m not even sure I’d be allowed to do it even after showing her the evidence.

This story was originally published February 12, 2020.

Watch: Are You Brave Enough to Try Mayonnaise Ice Cream?