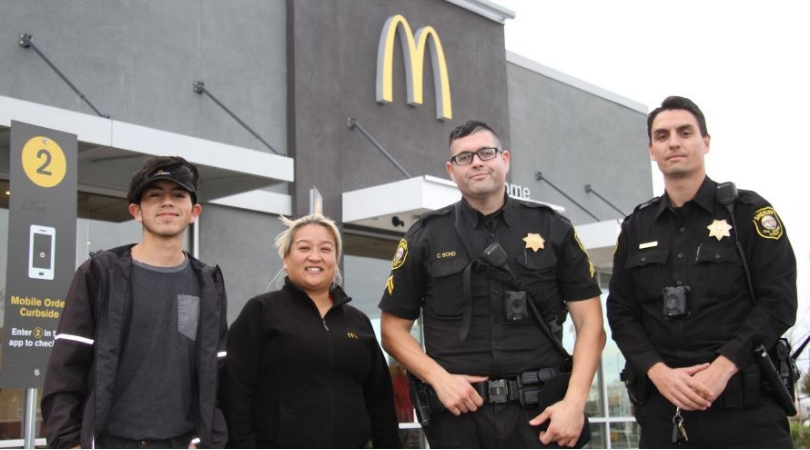 These McDonald’s employees certainly deserve a raise, the key to the city, and a free big mac with large fries. Why? Well, they saved a life. A woman was able to escape from a frightening situation on Christmas Eve after McDonald’s employees quickly helped her and called the police. The San Joaquin County Sheriff’s Office shared a recollection of the dramatic incident on Facebook, detailing how the woman alerted staff at a McDonald’s in Lodi California that was in need of immediate help after the man she was with allegedly threatened her life.

Shortly after 2 pm, the woman entered the Golden State McDonald’s restaurant and told a restaurant worker at the counter to call 911. She also provided the license plate number of the car she was traveling in and asked them to “hide her.” The Facebook post read, ?After the woman used the restroom, she attempted to place an order at the counter, but the suspect, Eduardo Valenzuela, was nearby and demanded she use the drive-thru.”

When the woman entered the drive-through, she mouthed ?help me? to an employee. A McDonald’s worker then told the manager, who ordered the employees to hold up the drive-thru line to give police time to arrive at the fast-food restaurant.

Luckily for the woman, the employees knew how to act quickly since that particular McDonald’s location is part of the “Safe Place Initiative.” The prevention program provides training to employees in designated locations to assist vulnerable people in need of immediate safety and help.

The Safe Place program also creates a network of locations including fire stations, schools, libraries and businesses that display yellow and black safe place signs. Young people can go to these locations in times of crisis to find a secure place to stay and be connected with a youth service agency or shelter. There are more than 20,000 safe places sides across the United States.

When law enforcement officers arrived, they instructed the victim, who was driving to pull over while Valenzuela was in the passenger seat. The woman told police the man had been violent with her in the past and had ordered her to drive him to visit his family on Christmas Eve. She said that he threatened her life and that he would use a firearm. Authorities were able to locate a stolen firearm in the trunk of a vehicle.

Valenzuela is facing felony charges of making a criminal threat, possessing stolen property and being a felon in possession of a firearm. His bail is set to $360,000.

Watch: The 10 Best Items on the McDonald’s Secret Menu