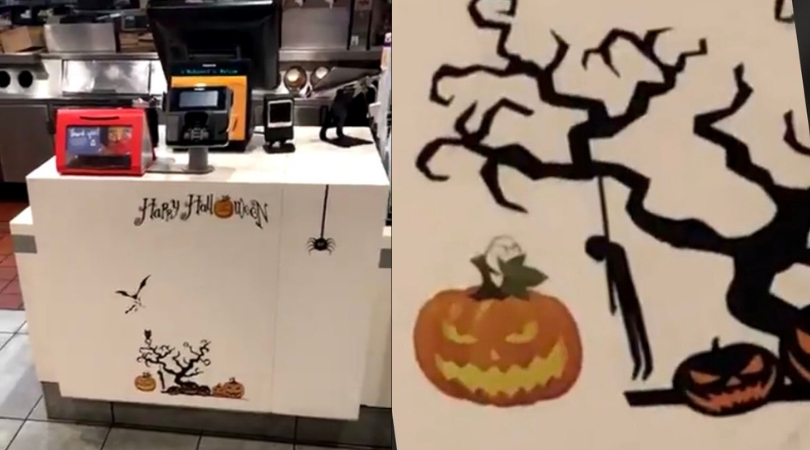 Yikes, some of these Halloween decorations have definitely gotten out of hand over the past few years. A McDonald’s restaurant in North Andover, Massachusetts had apologized for putting up decorations depicting a figure hanging from a haunted tree by a noose. According to customers, the decorations displayed insensitive and racist messages.

The small image was plastered to the front counter near the cash register, next to some more typical Halloween decorations such as spooky trees, bats, and a Jack O’Lanterns. Several people on social media saw the black and orange decorations as just a typical symbol of Halloween, gore, and death which can relate to the spooky holiday. Others thought the decorations display should be considered inappropriate content. Despite the controversy and disagreement, McDonald’s franchise did issue an apology.

.@McDonalds is apologizing after these Halloween decorations were put up in their North Andover restaurant. Customers we spoke with tonight are split about whether the image is offensive #WCVB pic.twitter.com/wnRfhmV8zP

The owner of the McDonald’s, Chuck Lietz, quickly released a statement after the complaints, saying the inappropriate decorations should have never been put up in the first place. The statement read, “creating an environment that is welcoming and inclusive to all our guests and employees is critically important to us, and we apologize for any unintended offense that may have had on our community.

This isn’t the first decoration that has caused some trouble this year. A similar situation occurred in Brooklyn when the co-founder of a non-profit Brooklyn art studio owner put a wooden display that featured brown paper dolls hanging by their necks from strings. The co-owner quickly took down the decorations, saying they were meant to be based on the horror film Annabelle.

As a supporter of the arts, I am saddened and outraged at the display of what has been referred to as Halloween decorations in Clinton Hill earlier this week that crossed the boundaries of art and expression, and dredged up an ugly history of racism, hatred, and terror in Black communities. We cannot stay silent. Join us tomorrow in partnership with the National Action Network and other community members as we address the urgent need for culturally competent education for community members around Halloween and beyond. The rally will be held tomorrow Thursday, October 24th at 5pm on Waverly Avenue near the corner of Greene Avenue.

After backlash and several angry customers, the co-owner posted a lengthy apology on her Facebook. It read, “I made a tremendous mistake. I now realize the harm and hurt caused by the unacceptable imagery I used in my Halloween decorations at home and understand how it connects to the centuries of historical trauma in this country.? So much for a “Happy Halloween,” huh?

Editor’s note: This article was originally published on October 29, 2019.