Medal of Honor Winner Lost to Coronavirus; Killed 135 Viet Cong in One Battle While Suffering 18 Wounds 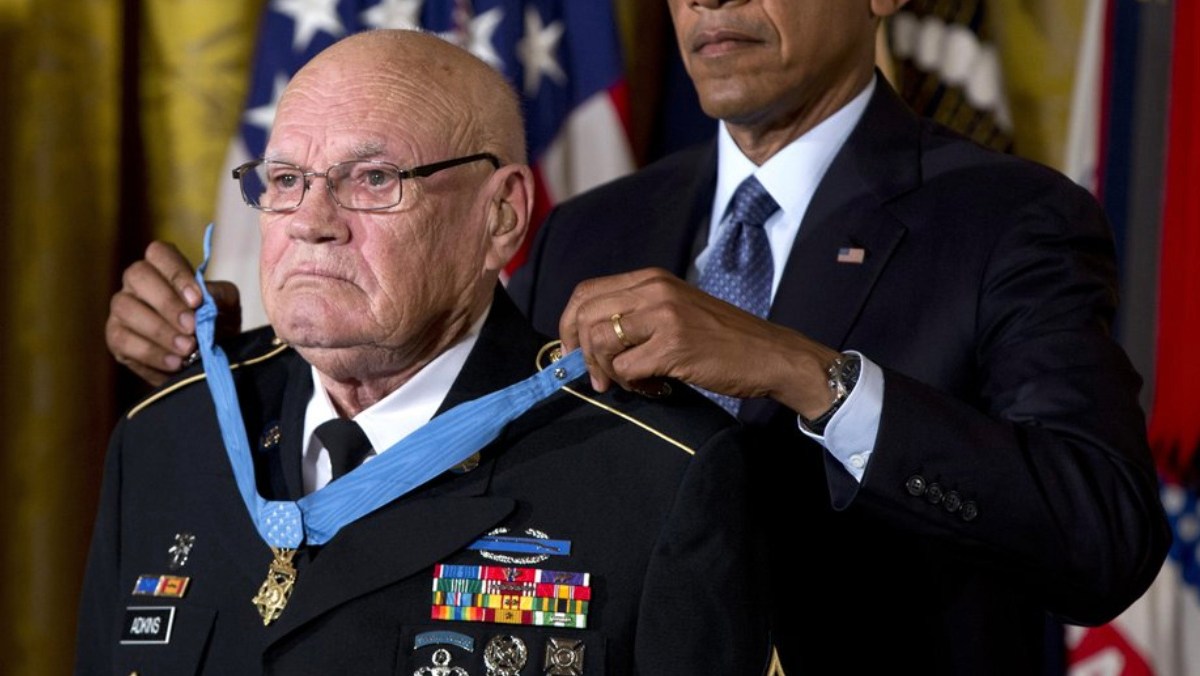 Decades after the Vietnam War, retired Army Command Sgt. Maj. Bennie Adkins had a simple way of explaining how he survived mortar attacks and rifle bullets that killed so many people all around him.

Then the coronavirus found Adkins and felled its first Medal of Honor recipient on April 17.

Adkins, 86, was an Alabama war hero who returned home to become an accountant, teach night courses to adults trying to better themselves and launch a nonprofit foundation awarding scholarships to veterans.

The resident of the small city of Opelika received the nation’s highest military honor from then-President Barack Obama during a 2014 White House ceremony.

While deeply honored and humbled, Adkins deflected attention from his courageous actions fighting off waves of enemy attackers at a strategic point in South Vietnam.

Adkins died three weeks after being admitted to the same hospital where one of his five children, Dr. Keith Adkins, works as a surgeon.

The son said his father was married for 60 years and gave back whatever he could around Opelika, an old railroad town of about 31,000 people near Auburn University, helping others not only in wartime but also at home.

“We want his legacy to be not just what he did in the military,” said Keith Adkins, who wasn’t involved in his father’s care. “We want to show that character that he had and what it led him to do when he was out of the military.”

Born on a farm in Oklahoma during the Dust Bowl drought that reduced much of the topsoil in the central U.S. to powder, Adkins was in the middle of seven children.

More interested in women than academics after entering college, Adkins dropped out and was soon drafted. He liked the idea of the military as a career but wanted more than an administrative position or regular infantry job. So he applied for the Special Forces, made it through a lengthy training regimen and landed in Vietnam in 1963 for the first of three tours.

About three years later, at age 32, Adkins fought the battle that brought him a lifetime of accolades.

A sergeant first class at the time, Adkins was in charge of a mortar crew at a U.S. military camp in the A Shau Valley of South Vietnam, near the border with Laos, when the Viet Cong opened fire on March 9, 1966.

He ran through exploding mortar rounds to drag several troops to safety, according to his medal citation, and then exposed himself to sniper fire to carry wounded comrades to medical care.

The main attack came a day later. Though wounded and with most of his crew dead or wounded, Adkins fought off waves of attackers from a mortar pit and then killed many more enemy troops from a communications bunker. Adkins suffered 18 wounds – including to an eye and his torso – but killed at least 135 enemy troops.

During the battle, Adkins recounted, bullets hit and killed a wounded man he was carrying on his back to safety. At another point, Adkins, a one-time baseball catcher, snagged a North Vietnamese hand grenade in mid-air and hurled it back at the enemy.

Finally ordered to evacuate the camp, Adkins escaped with a few others into the jungle and they were rescued two days later by a helicopter. That ending might have been much different – but for a tiger that was also in the jungle.

“This tiger could smell the blood on us, and surrounded us, and the North Vietnamese soldiers that had us surrounded was more afraid of the tiger than they were of us. They backed off and gave us room and we were gone again,” said Adkins, who co-authored a 2018 book about his wartime exploits titled “A Tiger Among Us.”

After retiring from the Army in 1978 after more than 20 years, Adkins earned a bachelor’s degree in finance and master’s degrees in management and education from Alabama’s Troy University while running an accounting firm in Auburn.

For years, Adkins taught night classes at two colleges and a jail for adults seeking their high school equivalency degrees. And in 2017, he established The Bennie Adkins Foundation, which has provided about 50 educational scholarships to Special Forces soldiers.

“He was really committed to help others advance themselves,” said Katie Lamar Jackson, who co-authored Adkins’ book.

Adkins’ family plans for him to be buried beside his wife Mary, who died last year, at Arlington National Cemetery. But it’s impossible to say when that might happen because of the pandemic.

“We’re not even going to have a local funeral now,” his son said. “There is no way we can follow the social distancing rules and have a funeral.”