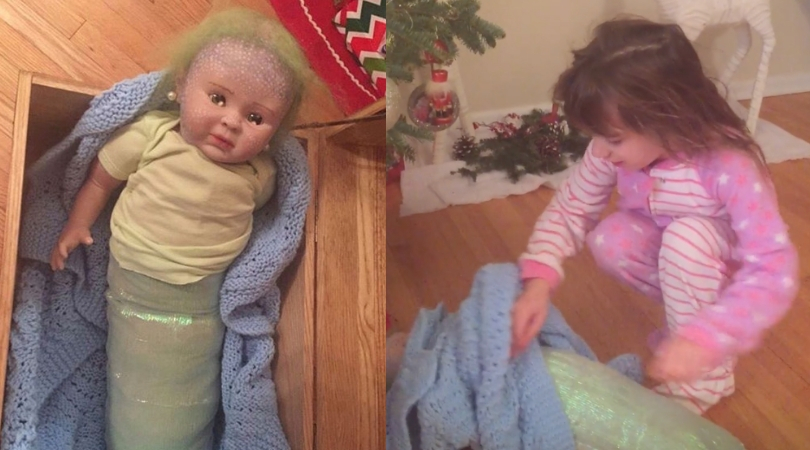 Talk about a wild and snowy Christmas! Turns out a mom, who thought she bought the perfect present for her daughter, accidentally bought a mermaid doll filled with cocaine. Yes, cocaine.

Elizabeth Faidley decided to go on Etsy one day and innocently look for Christmas gifts for her daughter. When she came across the intriguing mermaid doll, she ordered it as a surprise. But when the doll arrived, her and her daughter, Ellie, were disappointed when a ?hideous doll? with scaly skin, green hair, and creepy eyes arrived.

Faidley was confused since it didn?t look like the ?merbaby? they were expecting. Trying to make the doll more attractive, Faidley decided to dye the mermaid baby doll’s hair blonde. However, after two packets of hair dye, the doll?s hair wasn’t changing. After searching online for help, Elizbeth discovered a ?dolls and teddy bear hospital? in Secaucus, New Jersey, and decided she would send the doll for a makeover instead. Which I mean, is baffling to me that there is such a thing as a doll hospital. That?s a tad creepy.

After a few weeks and minimal contact from the doll hospital, the mother received a message from the Secaucus Police Department saying they needed to speak to her ?immediately.? Yes, forget about the cosmetic work, this woman had greater problems involving a drug operation.

“The Detective tells me that the Germans called the police down to the doll hospital that morning. When they removed Pearl?s head to repaint her offensive skin, they found 2 ounces of COCAINE. STUFFED IN HER HEAD. The detective first suggests that the drugs are mine. I adamantly argue and insist that I have never seen cocaine in my life. He relents, agreeing that it would be strange for me to stuff cocaine in a doll?s head and then ship it off to an expensive doll hospital.”

The New Jersey Drug Enforcement Administration (DEA) quickly ran Elizabeths? entire family through the system, eventually confirming that none of her family have drug convictions. So, authorities believed the cocaine indeed didn?t come from them. The DEA explained to the mother that they needed to keep the cocaine and the baby mermaid itself as evidence, and are planning to run a ?sting operation? of the doll?s manufacturer located in Alabama.

Disappointed by the situation, through a Facebook post, Faidley continued, ?Everything we do for our children?.we try to get the best Christmas gift and accidentally buy a mermaby stuffed with cocaine and become embroiled in an international drug-smuggling ring.?

Yikes, this could have gone way way worse for this mother. I guess all I have to say about his is…be careful what you buy online? Sneaky and definitely weird, especially since it’s from an Etsy shop. Should someone call the Disney store?