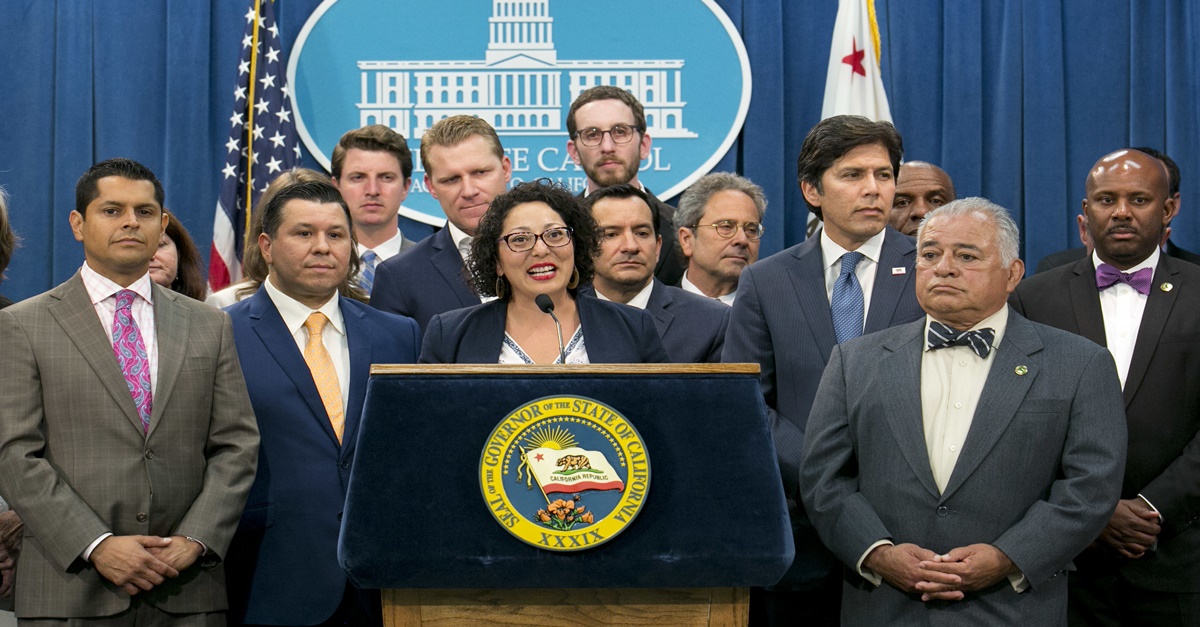 The California lawmaker whose advocacy of the #MeToo movement gained her national recognition, is now, herself, under investigation for allegedly groping and harassing a former legislative staffer.

Assemblywoman Cristina Garcia, among those celebrated for speaking out against sexual harassment in Time magazine’s December “Silence Breakers” Person of the Year cover story, is the subject of a state legislative investigation.

Garcia, a Democrat who chairs the Legislative Women?s Caucus and the Natural Resources Committee, has been accused by Daniel Fierro of Cerritos of groping the 25-year-old legislative staffer in 2014. Fierro, at the time, was working for Assemblyman Ian Calderon when he was groped by Garcia.

Fierro told Politico that Garcia cornered him alone after the annual Assembly softball game in Sacramento as he was cleaning up the dugout. Fierro claimed that Garcia appeared intoxicated and that she started stroking his back before squeezing his buttocks.

He claimed she then tried to touch his crotch before he was able to remove himself from the situation.

Fierro didn’t report the incident back in 2014, well before the current #MeToo movement, because he said he wanted to protect legislative staffers. But, after mentioning it in January to his former boss, Calderon, the Assembly Rules Committee opened an investigation.

RELATED: Woman claims her pastor had a six-way of “healing” her PTSD, and now they’re battling it out in court

And now, Fierro isn’t alone in claims of inappropriate behavior. A prominent Sacramento lobbyist told Politico, on the condition of anonymity out of fear of reprisals, the outlet reported, that she accosted him in May 2017. He claimed a similar story that Garcia cornered him, made a graphic sexual proposal and tried to touch his crotch at a political fundraiser.

Signed, sealed and delivered to @JerryBrownGov. Proud to have worked with @asmMelendez as she persisted on this essential legislation that was long overdue. Persistence has prevailed! #WeSaidEnough #TimesUp  #Ab403 pic.twitter.com/ot9AMeNtzg

The lobbyist also suggested that it appeared Garcia had been drinking heavily. He said he tried to leave the party to avoid Garcia, who had become increasingly ?flirtatious.?

RELATED: The ticket to good grades in this teacher’s class was allegedly a very inappropriate assignment

Garcia stopped him and asked where he was going before making a lewd comment to him.

?She came back and was whispering real close, and I could smell the booze and see she was pretty far gone,?? the lobbyist told Politico. ?She looked at me for a second and said, ?I?ve set a goal for myself to f–k you.?

He said she ?stepped in front of me and reaches out and is grabbing for my crotch,?? calling that moment the ?line in the sand? as he stopped her progress. ?I was four inches from her, eyeball to eyeball — and I said, ‘That ain?t gonna happen.'”

Garcia had told The New York Times that she had been the victim of repeated sexual harassment by men in the California capital throughout her career in the legislature. She was one of hundreds of Sacramento women who signed a letter with the hashtag #WeSaidEnough protesting harassment.