Military Medics Deployed in California and Texas as Coronavirus Surges 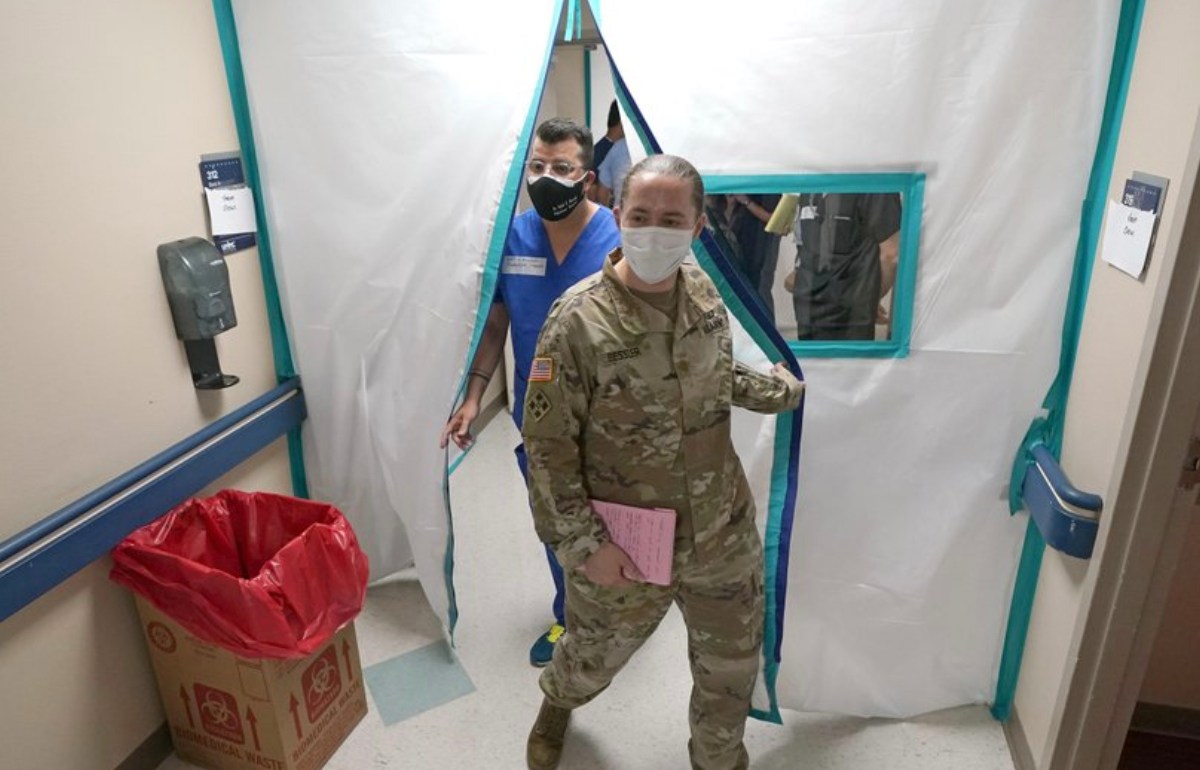 Teams of military medics were deployed in Texas and California to help hospitals deluged by coronavirus patients, as Miami area authorities began stepping up enforcement Friday of a mask requirement — echoing efforts in many parts of the world to contain surging infections.

In California, military doctors, nurses and other health care specialists were being deployed to eight hospitals facing staffing shortages amid a record-breaking case numbers. In Houston, an 86-person Army medical team worked to take over a wing of United Memorial Medical Center.

Several states have been reporting record numbers this week, contributing to a surge in the national death rate. The seven-day rolling average for daily new deaths has risen 34% from two weeks ago, while the case count in that period shot up 43%.

There were signs across the Sunbelt that the virus was stretching authorities’ capacity to respond. The medical examiner’s office in metro Phoenix has gotten portable storage coolers and ordered more to handle an influx of bodies — reminiscent of New York City at the height of the pandemic there earlier this year.

In Florida’s Miami-Dade County, the county commission unanimously approved an emergency order giving all code and fire inspectors authority to issue tickets of up to $100 for individuals and $500 for businesses not complying with guidelines to wear masks and practice social distancing. Police officers already had this enforcement power.

“We’re going to put a heck of a lot of people out there,” said Mayor Carlos Gimenez. “Our people are going to go everywhere.”

Gimenez said that too few people, especially younger people, have been following the “new normal” guidelines, so the county needed another enforcement tool.

Meanwhile, a Florida state legislator, Republican Rep. Anthony Sabatini, filed a lawsuit Friday against a mask ordinance in Pinellas County, home to St. Petersburg and Clearwater. About 100 people in support of his stance rallied in front of the county courthouse, some holding signs saying mask requirements are unconstitutional.

At least half of the 50 states have adopted requirements for wearing masks or other facial coverings.
But in Georgia, Gov. Brian Kemp has banned cities and counties from requiring face coverings. He sued Atlanta late Thursday to prevent it from defying his order, but Atlanta Mayor Keisha Lance Bottoms said she was prepared to go to court to maintain the local mask requirement.

Worldwide, governments are frantically trying to prevent and put down fresh outbreaks and keep their economies running as the pandemic accelerates in some regions and threatens to come roaring back in others. Globally, confirmed cases numbered more than 13.8 million Friday and COVID-19 deaths totaled more than 590,000.

To cope with the pandemic’s fallout, the United Nations said it is increasing to $10.3 billion its appeal for humanitarian aid funding.

Jens Laerke, a spokesman for the U.N. Office for the Coordination of Humanitarian Affairs, said in Geneva that the number of people who need humanitarian assistance has more than doubled during the pandemic — from around 110 million to about 250 million.

India’s total confirmed cases surpassed 1 million, the third-highest number behind the United States and Brazil, and its death toll reached more than 25,000. That followed Brazil’s announcement Thursday evening that its confirmed cases exceeded 2 million, including 76,000 deaths.

The continuing surge of new cases in India — where experts believe the vast majority of cases are still being missed — drove home concerns over the readiness of some countries to cope with outbreaks that could overwhelm hospitals and test feeble health care systems. The government ordered a weeklong lockdown in the technology hub of Bangalore after confirmed cases there increased exponentially.

In sub-Saharan Africa, which already had the world’s greatest shortage of medical personnel, nearly 10,000 health workers in 40 countries have been infected with the coronavirus, the World Health Organization said. More than half of infected workers are in South Africa, where most of the continent’s infections are as well.

Stores, malls, barber shops, beauty salons, beaches and tourist sites will also be closed on weekends. Public gatherings will be limited to 10 people indoors or 20 outside.

New virus cases have soared in Israel since restrictions were lifted in late May. The country reported around 1,900 new cases on Thursday.

Japan’s capital recorded a single-day record number of new coronavirus cases for a second straight day on Friday with 293. Tokyo was taken off a list of places around the country where discounts are offered under a government scheme to encourage domestic tourism.

Spain, which earlier in the pandemic was one of the world’s hardest hit countries, was grappling with more than 150 active outbreaks, most of them in the northern Aragon and Catalonia regions. Health authorities asked the 5.5 million residents of Barcelona, the regional capital of Catalonia, to stay at home as much as possible to stem the virus’ spread.

They also announced a local ban on social gatherings over 10 people, and nightclub and gym closures. Spain reported 580 new cases Thursday, the highest daily number since May 10.

British Prime Minister Boris Johnson charted a different course, announcing that as of Aug. 1 the government was no longer asking people to avoid public transit and would stop advising workers in England to work from home.

Keen to reinvigorate the economy, Johnson wants to see struggling businesses that rely on office workers rebound. The U.K.’s official death toll, which stood at more than 45,000 as of Friday, has for several weeks been the highest in Europe.

About the author: David Crary
David Crary is a reporter with the Associated Press.
View More Articles

About the author: Freida Frisaro
Frida Frisaro is a reporter with the Associated Press.
View More Articles