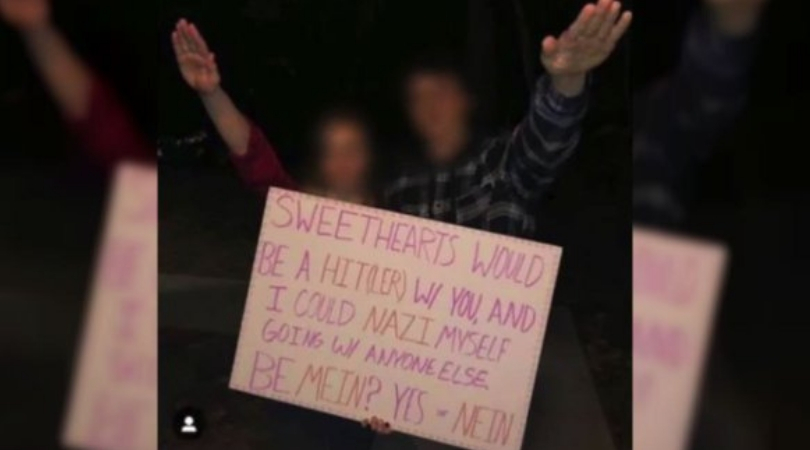 I don’t understand teenagers, really. Whatever happened to a regular “Hey, want to come to the dance with me?” Things have gotten way out of hand, and this picture absolutely proves it. Turns out, two Minnesota students thought it would be hilarious to do a very offense (if I might add) dance proposal.

The picture shows the couple raising their hands in the Nazi salute while holding a sign with an anti-Semitic language. The sign reads, “Sweethearts would be a Hit(ler) with you, and I could Nazi myself going with anyone else. Be Mein? Yes, Nein.” The girl used this poster to ask her date to the Sweetheart Dance at Minnetonka High School. The photo was shared by a concerned parent after a high school student saw it roaming around social media.

Oh, but it doesn’t stop there. The student also captioned the photo (which of course, has since been removed) of the pair giving the Sieg Heil, “I would like to state I am not anti-Semitic in any way, I hate all races equally.” Well gosh darn, who hurt this woman?

According to a Minnetonka’s Jewish Student Union, Rabbi Kupfer, the teenagers post not only offended several of her classmates, but some were afraid to attend school. The students felt uncomfortable, saying they were concerned that a statement as bold as this was said and done by someone at their school. Honestly, I get it, this girl doesn’t have a sense of what’s wrong and right. I don’t care what religion you are, or if you have one at all, it’s called morals and decency. You respect others the way they respect you and your decision to not to have one. Period.

Safe to say Minnetonka High School principal Jeff Erickson, reassured the parents in an email saying the student’s conduct did not reflect on the school’s core values and that the matter “was being handled with proper disciplinary actions” since the school was built on kindness, respect, and consideration to others. The student who shared the social media post on her private Instagram account has upped her bio to read, “I apologize for my stupid mistake. There was no intent to offend anyone. [Direct message] me if you would like to discuss anything.”

Sorry kiddo, some things you just can’t erase. You should maybe try asking your classmate to the dance in person next time. Oh, and learn some values, that’ll help you say and do the right thing in the future.