Mom Shares Haunting Before and After Photos of Her Addicted Son 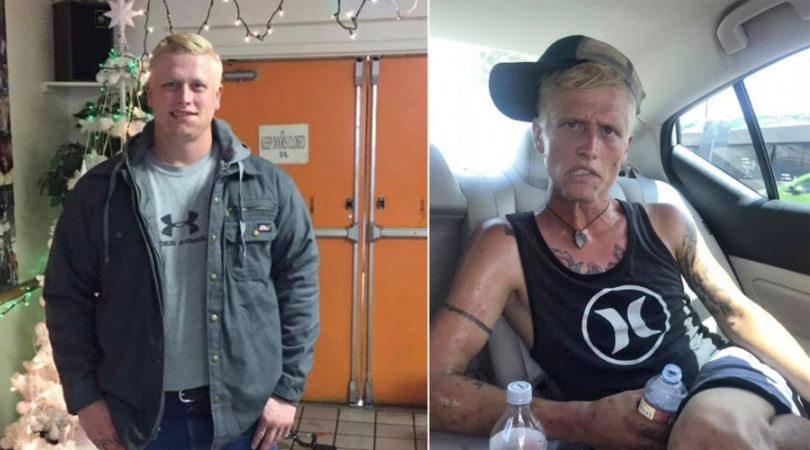 A Missouri mother shared terrifying before and after photos of her son, which shows the evolution of his addiction. Jennifer Salfen-Tracy took to Facebook to show the true “face of heroin and meth” alongside two shots highlighting the horrific and devastating transformation of her son Cody Bishop, who is now homeless in Las Vegas.

The pictures were taken seven months apart, showing how fast drug usage can affect someone. In the first image, you can see Bishop looking like an athlete, fresh-faced and healthy. The second image shows Bishop appearing more gaunt, embracing his body which looks much thinner, and track marks from several injecting wounds clearly visible along his lower arms. The mother calls the situation a “sad reality” for people and their families, admitting it was a heartache situation that she had to keep hidden.

The mother, who is from Wentzville, Missorui decided to share the post as a call for action and has since gone viral. Her post has been shared more than 45,000 times. Her caption read, ?This is a true issue in our world today that we need to pull together and focus on fixing instead of the government worrying about and spending all their money on throwing each other under the bus. This is not just a problem that my family faces but almost everyone knows someone who has a drug/heroin addiction.?

Salfen-Tracy confessed to not hearing back from her eldest son in weeks urging him to call home to make sure he is okay. The 26-year-old graduated from Wentzville Holt High School back in 2008 and was a star athlete. She states hearing how bad he is doing is hard on the family, but not hearing about him at all is worse.

“Through social media I have came along so many great people that have crossed his path over time through his past rehab. They have A great support team with eachother that is amazing and I appreciate those who have reached out trying to help. I just want to say thank you to those who have talked to him and thank you for all the prayers. This is not just A problem that my family faces but almost everyone knows someone who has A drug/ heroin addiction. I pray for strength for those suffering and healing for their families and friends.”