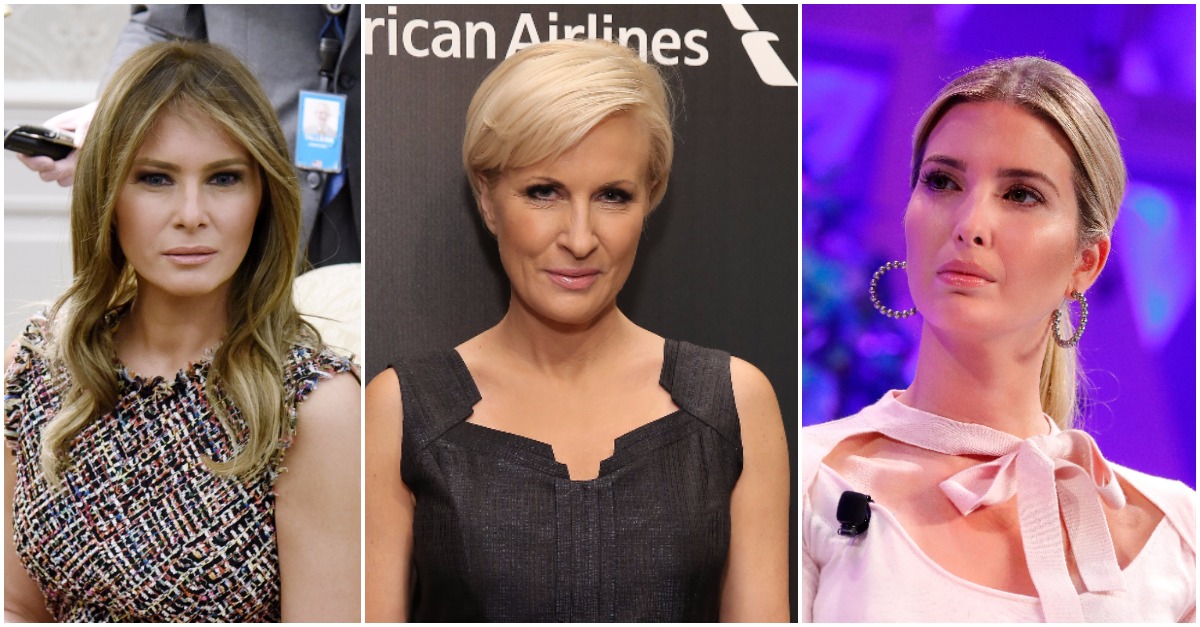 Brzezinski opened her monologue on “Morning Joe” by saying, “I’m not going to argue whether there was sexual innuendo here — there was.” She went on to criticize Press Secretary Sarah Huckabee Sanders before looking into the camera and saying ,”[The president] should apologize for being a sexist pig, for sexually harassing on Twitter, for using sex to denigrate women. And again, I mentioned yesterday that the president is obsessed with women … any woman who stands up against him, he is obsessed with.”

Brzezinski then turned her attention to the first family, saying ,”[Trump’s] wife, who has a platform against cyberbullying — that’s a joke. That is the saddest thing I’ve ever seen in my life. And his daughter who came to Washington to work for the president and develop a platform for women? Go home. Go home. You’re doing nothing if you stand by this president, and you should think of the country rather than your brand.”

Lightweight Senator Kirsten Gillibrand, a total flunky for Chuck Schumer and someone who would come to my office “begging” for campaign contributions not so long ago (and would do anything for them), is now in the ring fighting against Trump. Very disloyal to Bill & Crooked-USED!

The host also mentioned that she feels bad for Sarah Sanders and added, “All the men around this president … do you really go home to your wives and daughters and say this president knows what he’s doing? Your wives should kick you out.”

While Brzezinski’s bomb-throwing might have riled up supporters of the first family, there’s a possibility that she was addressing an audience of one: the president himself. Trump claims that he doesn’t watch “Morning Joe,” but many Washington insiders believe that he’s a semi-regular viewer. A recent profile of Trump in The New York Times cited friends of the president who say that he watches the program because “it fires him up for the day.”

Public records show that Trump donated to Gillibrand as recently as 2010, back when he was supporting a lot of Democratic politicians, including Gillibrand’s fellow New York senator, Chuck Schumer. At that time, she was still a fairly conservative Democrat with a “A” rating from the National Rifle Association. Since then, Gillibrand has become a major voice in the #MeToo movement against sexual harassment and assault, and she was the first Democratic senator to call on Al Franken to resign. After the president’s tweet, Gillibrand fired off a number of statements, including tweeting, “Women are a force to be reckoned with. We won’t be silenced.”

Women are a force to be reckoned with. We won’t be silenced.

For Gillibrand, the online tiff with the president may open the door to stealing his seat; while she’s an outsider for 2020, the senator has been one of the many Democrats shaking up Washington. After her online tussle with the Oval Office, The Washington Post ran a profile on Gillibrand, speculating that “[Trump’s] attack may do more political good than harm.” Sure enough, she immediately started fundraising off her brush with Trump. Previously, she has said that she will not run in 2020, but her reelection to the Senate seems certain in 2018, and the 51-year-old might just turn her eyes to mounting a White House run.