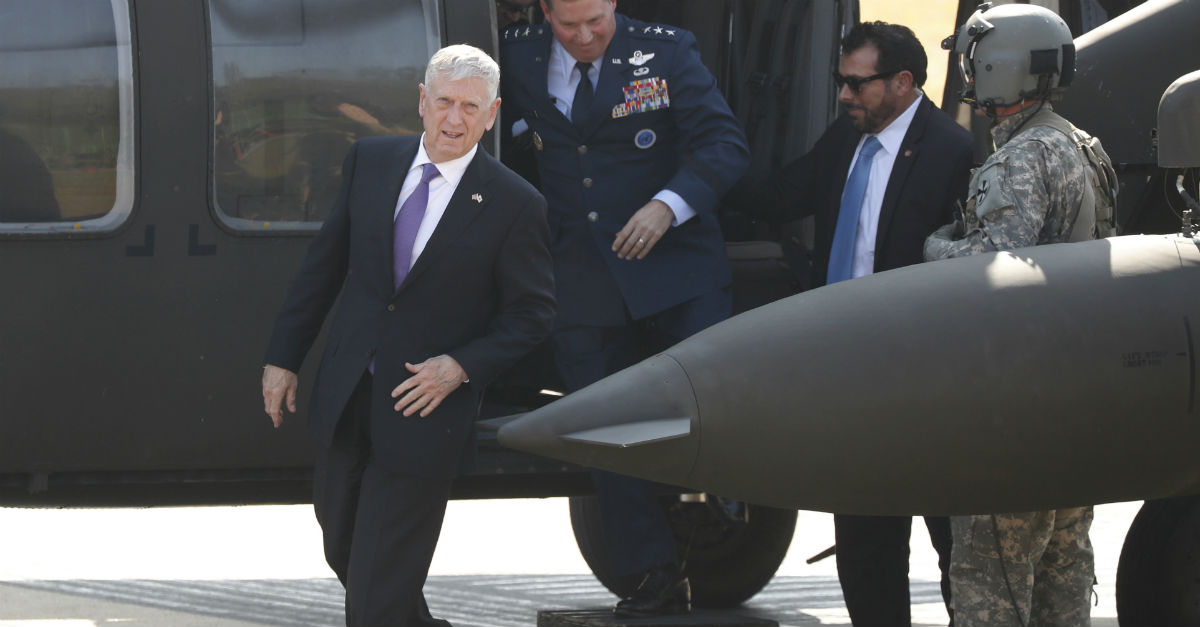 (Jeon Heon-kyun/Pool Photo via AP)
U.S. Defense Secretary Jim Mattis, left, arrives at the Joint Security Area (JSA) on the Demilitarized Zone (DMZ) in the border village of Panmunjom in Paju, South Korea, Friday, Oct. 27, 2017. Mattis is accusing North Korea of building a nuclear arsenal to "threaten others with catastrophe," and says the Trump administration remains committed to compelling the North to accept complete nuclear disarmament. Mattis pledged solidarity with the South in remarks Friday while inside the Demilitarized Zone that separates the two Koreas. (Jeon Heon-kyun/Pool Photo via AP)

Mattis stood on the border between North and South Korea and echoed President Trump’s remarks at the United Nations, saying, “North Korean provocations continue to threaten regional and global security despite unanimous condemnation by the United Nations Security Council.” The secretary, who has been on Trump’s team since the beginning of his presidency, also met with South Korea’s defense minister, Reuters reports.

The general also gave a nod to Secretary of State Rex Tillerson’s diplomacy efforts, saying, “As Secretary of State Tillerson has made clear, our goal is not war, but rather, the complete, verifiable, and irreversible denuclearization of the Korean peninsula,” Business Insider reports. While Mattis, Trump and Tillerson have all drawn a hard line on North Korean de-nuclearization, the hermit kingdom has made it clear that they have no intention to tone down their nuclear program. General Mattis was also critical of Kim Jong-un’s dictatorship, calling it “an oppressive regime that shackles its people, denying their freedom, their welfare and their human dignity in pursuit of nuclear weapons,” the New York Post reports.

President Trump is scheduled to visit the Korean Peninsula later this month, though there have been doubts as to whether he will visit the DMZ. The U.S. Navy has sent three aircraft carriers to the western Pacific in the past week, which is extremely unusual and may be the result of the heightening tension between the U.S. and North Korea.