Righteous anger and numb futility follow the attack on Manchester 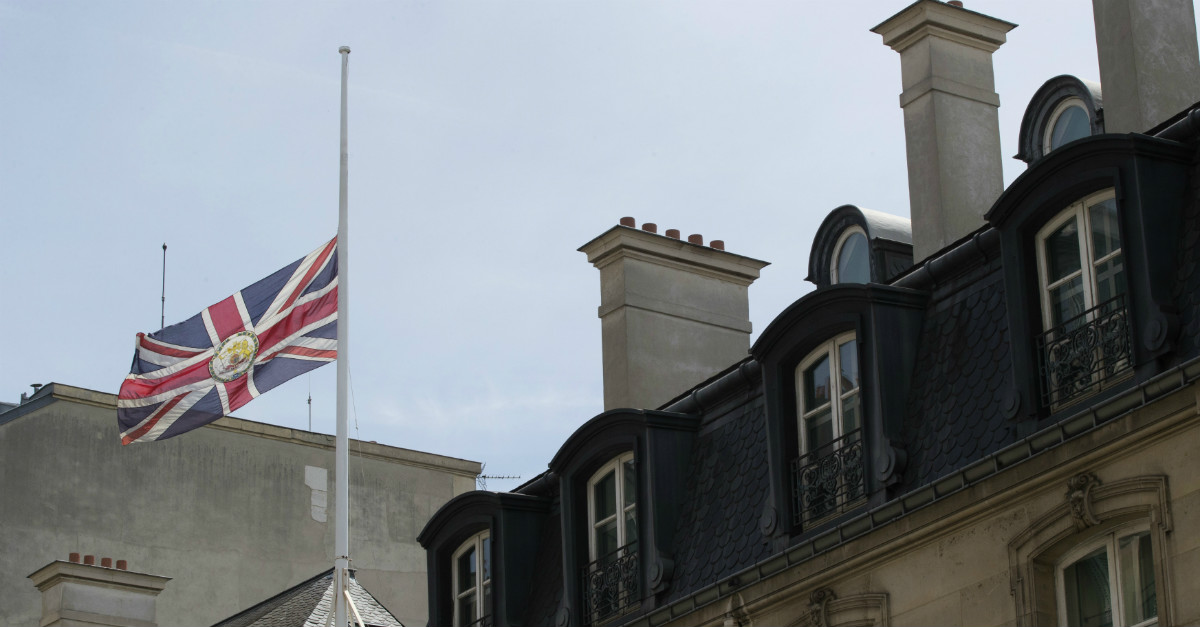 AP Photo/Michel Euler
The Union flag flies at half mast outside the British Embassy in Paris, Tuesday, May 23, 2017. An apparent suicide bomber attacked an Ariana Grande concert as it ended Monday night, killing over a dozen people among a panicked crowd of young concertgoers. (AP Photo/Michel Euler)

Last night’s terrorist attack on an Ariana Grande concert in Manchester, England, reminded me of the school shooting in Newtown, Connecticut. In both incidents the assailants, who could have picked any number of potential targets, decided to vent their rage against young children. A stolen life is just that, no matter the age, but there’s something uniquely depraved about using a weapon of war?a nail bomb, in this case?against those that society goes to its most strenuous exertions to protect. This is nihilism ran to its remotest and darkest endpoint.

Twenty-two died in last night’s attack and a further 59 were wounded, many of them young girls. The word Manchester, denoting a city with over 700 years of history and formerly one of England’s industrial vertebrae, will thus become shorthand for a single violent event, as did Newtown and the Bataclan. According to Manchester police, it took only a single attacker to snuff out those lives, though given the sophisticated planning involved in the carnage and the surge on ISIS channels immediately following, there were probably supporting actors, too.

Britain in some ways has become a victim of the West’s success. As Kurdish forces inch closer to Raqqa in Syria, Europe’s ISIS recruits are giving up the fight and returning home, no less radical and vengeful than they were before. A chilling news article from The Guardian two months ago reports that among the emigres are youths who were born under caliphate rule abroad, and quotes a government official who warns: “It is possible they are going to return indoctrinated, deeply dangerous and damaged.” The Islamic State has thus mounted a children’s crusade, a total war in which all are potential targets for both recruitment and annihilation. It is important that we not let them prevail, that we not allow their anarchic violence to dictate the terms of our free society.

RELATED: President Trump won?t call terrorists monsters ? he?s got a much harsher term for them

British Prime Minister Theresa May is a formidable leader who will now see her power solidified in next month’s elections against the feckless Jeremy Corbyn, but that untrammeled authority, coupled with her often bad instincts, could lead her astray. There are few leaders in the Western world less concerned with civil liberties than May. It was she who introduced the hyper-invasive Snooper’s Charter as home secretary and she who piped into her party’s platform language threatening to prosecute Internet companies that refuse to take down content the government finds objectionable. Following this latest horror, her instinct will likely be to clamp even tighter on CCTV-bristling Britain. But as with Newtown, where everyone blamed guns and video games and mental health, and then one by one had their narratives squashed as the facts emerged, the search for panacea new laws is likely to prove fruitless here, too.

What more can Britain do? Short of mind-reading, how do you stop every potential terrorist with access to a truck or nails in his garage? British authorities have done a commendable job as it is, keeping the number of attacks low as the threat heightens, but when the weapons are homemade and the targets are everywhere even they’re going to miss every once in a while.

RELATED: Ariana Grande released an emotional statement to fans after the deadly explosion at her Manchester concert

Think about it for too long and you’re filled with a numb futility. We have been fighting Islamic terrorism now for 16 years at great cost yet the Middle East is unspooled, the lines of battle have been extended across Western Europe, and the sectarian pendulum looms once again as the ISIS caliphate is replaced by Iranian-controlled Shiite militias who are determined to oppress Sunnis?that will engender another radical counter-reaction and then on we go. We seem incapable of improving any of this. Had we known during the height of our resolve back in late 2001 that approaching two decades later terrorism would be more prevalent than ever and bombs would be roaring from Manchester to Moscow, I wonder how we would have responded.

One more observation. Donald Trump spent last weekend jaunting around our great and glorious ally Saudi Arabia, which has done more than any other country to incubate radical Islamic terrorism and which was visited by this year’s Westminster Bridge attack. How many more of these incidents need to occur before we realize the Cold War is over and Riyadh’s degenerate royal court isn’t doing its part? If Donald Trump truly wants to prevent further bloodshed, he might start by applying pressure at the source.