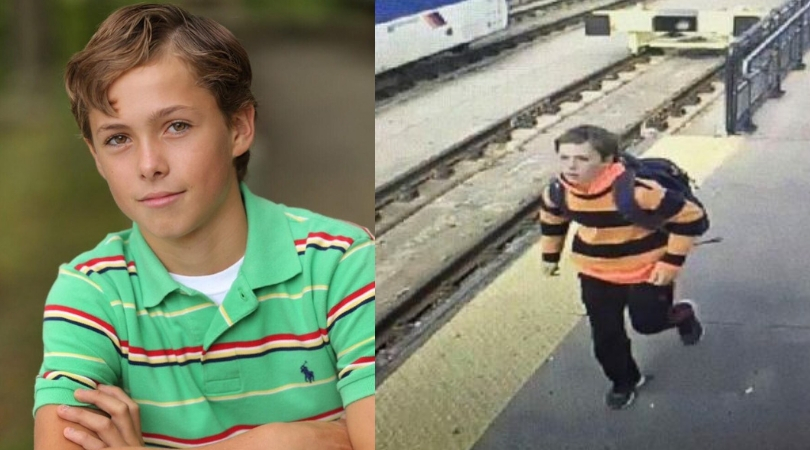 15-year-old Thomas Koldin of Mountain Lakes who ran off on October 30, has been found safe in Philadelphia. According to authorities, Kolding was staying in a tent in Southwest Philadelphia when he was spotted.

Police in Miami Township, Ohio previously announced they received reports that the teen was seen in the area last week. The high school freshman left behind his cell phone, laptop, and took $1,000 from saving. The father said his son always wanted to go to California, which is why it was suspected he might have wanted to travel to the city.

Thomas initially traveled by train from Denville to Newark-Broad Street Station and then to New York Penn station. He was previously spotted at the Walter Rand Transportation Center in Camden on November 2. Thomas was taken to the Children’s Hospital of Philadelphia where he is being evaluated.

Morris County Prosecutor’s Office has released surveillance images of 15-year-old Thomas Kolding, captured early Saturday afternoon at the Walter Rand Train Station in Camden, a few miles from Philadelphia. Authorities believe Kolding is safe, and believe the boy is “in control” of his actions.

Kolding was dressed in an orange and black striped hooded sweatshirt, and a camouflage jacket with dark pants, caring a blue Adidas backpack. The family originally thought the boy had a black backpack on him. Thomas ran away from home leaving nothing but a note the night before Halloween. Morris County authorities and the FBI are working with several departments around the area to search for the teen.

Aleksandra Kildin, the mother of Thomas, took to Facebook to update the public of the new surveillance footage, asking for their help in finding her son. Expressing their gratitude and relief he was spotted in safe conditions, the post read,

“He walks with a purpose, not strangely fast, but just someone who is going somewhere,” the Kolding post reads. “He doesn’t usually chew gum but his candy vice is Jolly Ranchers. If anyone sees him (especially those unfamiliar to him) think of him and talk to him like a 25-year-old not a 15 year-old.”

The day before Halloween, 15-year-old Thomas Kolding packed his belongings in a large black backpack, grabbed $1,000 from his saving, climbed onto his bike, and ran away from home. Thomas left his cell phone and other electronic devices behind in Mountain Lakes, New Jersey along with a handwritten note stating that he “did not want to be found.”

The note was found by Thomas’ distraught father, Nicolai Kolding, who said his son ran off after an argument about his grades. Kolding said his son may have been upset over the argument, even though he was in honors science and math class. He attended the Mountain Lakes High School as a freshman and took the money he earned shoveling snow in, pet sitting for neighbors and mowing lawns.

Morris County Prosecutor’s Office told the parents, Thomas’ last location was in his family’s Mountain Lakes home and is believed to have taken a train to Newark Broad Street station then to New York Penn Station. Surveillance footage shows Thomas on Broad Street Station late on October 30th. According to his parents, and past computer history, Kolding had a “strong interest” in going to California.

The boy is 5 feet 3 inches tall and weighs 120 pounds with brown hair and eyes. He was last seen wearing a camouflage jacket, gray winter skull-cap, and a large black backpack.

The father said his son is a savvy traveler after the family often travels abroad to their summer home in Norway. He and his wife encourage their three sons to be independent, and this year Thomas flew back alone to the United States from Norway. A spokesman for Morris County Prosecutor’s office, Peter DiGennaro, spoke to media outlets saying there have not had any contact with the boy as of yet, but have been able to track him through survailance camaras around the city.

His disappearance has gone viral on social media as Facebook users have shared his story and information. His mother shared a post on Friday, pleading for people to keep an eye out for him, and has been shared more than 40,000 since Monday. The post read, “Our son, Thomas, has been missing since Tuesday. He is a wonderful, resourceful, and far-too-adventurous young man who we are worried about beyond words.”

The post was updated on Monday, November 5, saying police were able to track footage of the boy at Penn station.

“UPDATE 11/5: For the first time, it feels like we’re just about to make real progress as we continue our search for Thomas. I believe that my husband’s trip today into Manhattan may have gotten us somewhere. He gained direct access to the conductors and brakemen on both of Thomas’s trains (one of whom remembered him, so we can now feel sure he made it into NYC), an interview with CBS-2 that aired tonight and should generate real leads, and a meeting with NYPD in which they think they may have video evidence of Thomas walking through Penn Station (in which case we can then begin to track his movements.”

The New Jersey State Police also used Facebook to ask for clues from the public about Thomas’ whereabouts. If you have any information you are asked to contact the Mountain Lakes Police Department at 973-334-1413.