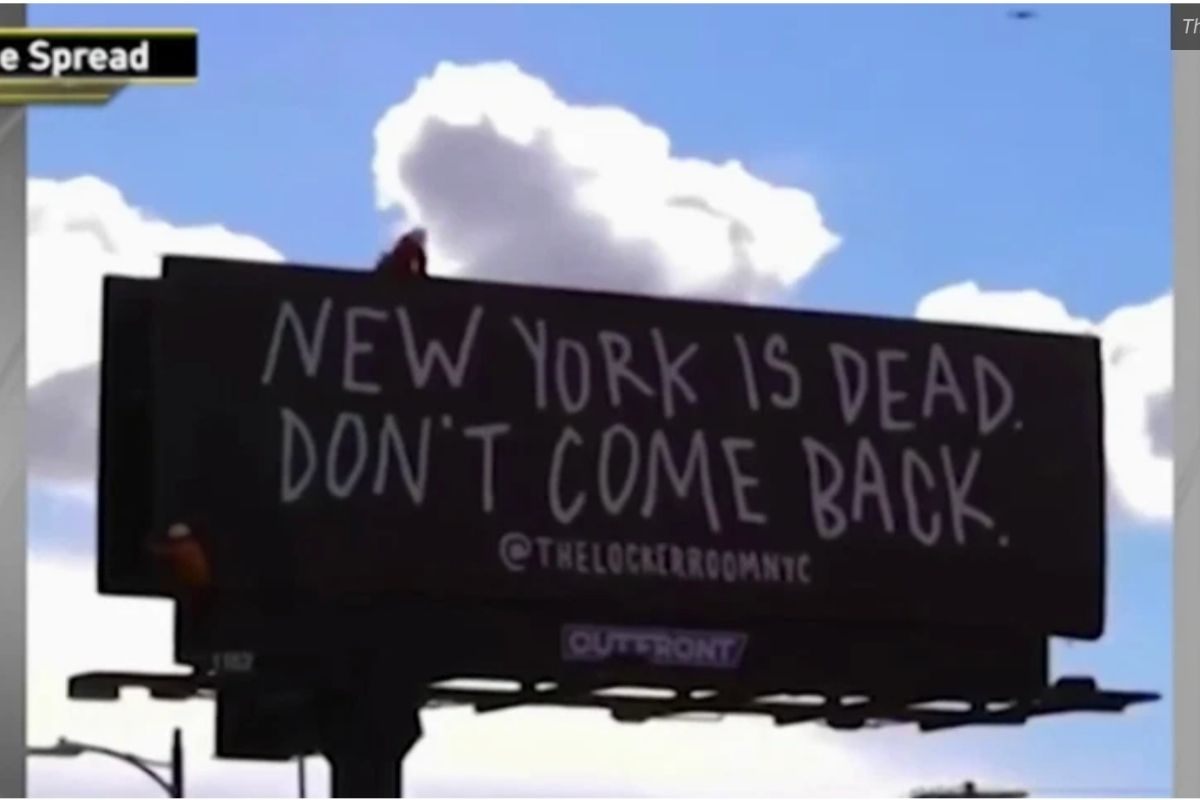 A billboard that boldly states “NEW YORK IS DEAD. DON’T COME BACK.” now stands in surprisingly, Los Angeles. The black-and-white signage is less PSA and more ironic commentary, as its creators — two idealistic (or self-important) Williamsburg artists — declared proudly on NBCNewYork. But what exactly makes this statement so controversial?

‘New York Is Dead. Don’t Come Back’: Billboard Rips Those Who Fled NYC Amid Pandemic

The “NEW YORK IS DEAD” message first appeared streaming overhead in Miami, Florida, as a mysterious banner attached to a plane. This Los Angeles location now sits on the bustling Sunset Boulevard and has become an object of national fascination. Both messages are the work of Graham Fortgang and Samara Bliss, two hipster artists representing the Brooklyn art collective, The Locker Room NYC.

The phrase “New York is dead” gained attention — and notoriety — last year after Brooklynite venture capitalist James Altucher wrote that New York City would never bounce back from the economic crash and mass exodus, resulting from the rise of the Coronavirus pandemic. New York legend Jerry Seinfeld then responded to the “putz” through a scathingly true-to-form op-ed in the New York Times, “So You Think New York is Dead.” He wrote, “Real, live, inspiring human energy exists when we coagulate together in crazy places like New York City.” Along with effectively roasting the “enervated, pastel-filled” life found in Florida, Seinfeld’s tirade effectively ended all conversations regarding the so-called death of New York. Until now.

What the New Billboard Means

I’ll be up-front: I did “flee” New York at the height of the pandemic I was a college senior living in Manhattan when my school shut down in-person learning and evacuated the dorms. And no doubt there is a complex and respectable story behind everyone who remained, as billboard co-artist Graham Fortgang told NBC, in the “cramped” (and overpriced) real estate that makes up the crowded city. Shelter-in-place certainly has a different meaning to those renting with two, three, four roommates. Or to those with children, now forced to burn their energy inside small apartment walls.

But the placement of the billboards in Los Angeles and Miami is telling. The demographic who flies off to an expensive West Coast metropolis like L.A. or the hard-partying Florida beaches are likely the exact same folks for whom “people [are] in the streets making art, singing and dancing” as co-artist Samara Bliss described present-day NYC in her NBC interview. (The billboard could have fittingly been placed in closer affluent getaways, like the Hamptons or Westchester County.)

No, New York is not dead. But many New Yorkers did die. Roughly 26,763 of them. By the second month of the pandemic, mobile morgues were popping up on public land to accommodate the vast overflow of bodies. Most of those who died were old, over 65, and low income. It was those communities that lacked, and still lack, the health care necessary to fight Covid-19. It was those impoverished communities that most essential workers came from. And those survivors continue to work, unprotected, as the projected NYC vaccine rollout flounders. Presumably, this is not the demographic that Fortgang and Bliss’s celebratory art caters to. Though they’re right that the “cultural flame” of New York continues to burn, the fight is not nearly over.

Perhaps this is a pessimistic interpretation. The City of New York has announced plans to bring Fortgang and Bliss’s tongue-in-cheek “NEW YORK IS DEAD” campaign back to the city where the slogan will appear on subway ads and local billboards in an effort to “instill pride” for those who have stuck it out. Namely, those who didn’t have a choice. Personally, I think that within the confines of the five boroughs, the mission will prove ultimately meaningful. Shaming inauthentic posers are, after all, a natural New Yorker trait that even a global pandemic could never dampen.

WATCH: Are You 65+? You’re Probably Eligible For the COVID-19 Vaccine Today!